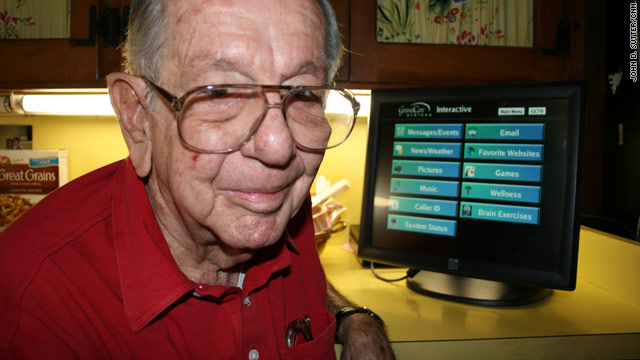 Robert Jennings, 86, has a system in his home that monitors his movements and activities.
STORY HIGHLIGHTS
RELATED TOPICS

Columbia, South Carolina (CNN) -- The sensors know when Charlton Hall Jr. wakes up to go to the bathroom. They know how much time he spends in bed. They watch him do jigsaw puzzles in the den. They tattle when he opens the refrigerator.

Not for Hall. The 74-year-old finds comfort in monitored living.

"It's a wonderful system for helping older people to stay independent as long as possible," he said, sitting in the living room of his 7,500-square-foot house, a sensor watching him from an elaborate bookshelf. "They know where I am -- all the time."

Sensor networks, which made their debut in hospitals and assisted living centers, have been creeping into the homes of some older Americans in recent years.

The systems -- which can monitor a host of things, from motion in particular rooms to whether a person has taken his or her medicine -- collect information about a person's daily habits and condition, and then relay that in real-time to doctors or family members.

If Hall opens an exterior door at night, for example, an alert goes out to his doctor, a monitoring company and two of his closest friends, since he doesn't have family nearby.

"They want to know if I've fallen, and where I am," he said, noting that he's fallen several times in recent years and also has a chronic heart condition and diabetes.

Hall's monitoring network, made by a company called GrandCare Systems, features motion-sensors in every room as well as sensors on every exterior door. A sensor beneath the mattress pad on his bed tells health care professionals if he's sleeping regularly.

All of this connects wirelessly with vital sign monitors, which send his doctor daily reports about his blood-sugar levels, blood pressure and weight. He can see charts about how he's doing on a touch-screen monitor that sits on a desk in his home office.

This type of set-up may only be the beginning.

University researchers are testing robots that help take care of older people, keep them company -- and even give them sponge baths. Meanwhile, some younger people have taken to collecting information on their own, often going to extremes to document exercise routines, caffeine intake and the like and posting the data online.

Jeff Kaye, director of the Oregon Center for Aging & Technology, said this monitored-all-the-time life will become the norm for older people in the United States within five years, and will be common for people of all ages soon after.

His lab has been conducting research on the benefits of monitoring people all the time, and they have early indications that doctors may be able to spot early Alzheimer's, dementia and indicators a person is susceptible to falls by monitoring their daily lives.

While the technology is basically ready to go now, he said, researchers haven't had enough time to figure out how these systems will work most effectively. Crunching the data can be challenging, and the number of things we can monitor needs to be increased for these systems to provide more valuable info.

"The temperature you sleep at, the particulate matter in the air, the ambient light your body experiences ... drastically can change your physiology, and we are barely aware of it," he said.

The idea of monitoring older people is catching on slowly, and there are several reasons for this.

Part of the hold-up is a lack of research. While tech researchers and health care experts have a general sense that more monitoring must be a good thing for spotting health trends and preventing accidents, there's little formal research to prove this.

Companies that make these systems are also scarce.

Only a few boutique companies in the United States sell these types of monitoring systems for home use, experts said in interviews, although Intel and GE are set to announce a partnership such systems in January, GE Healthcare's Jim Pursley said.

Some complain that the monitoring systems are too expensive for many people.

Hall's system in Columbia, South Carolina, cost $5,500 to install, he said. Others pay monthly fees for monitoring services, kind of like a cable TV payment model.

Bob Jennings, who lives 45 minutes down the road from Hall in Orangeburg, South Carolina, said he pays $300 to $400 per month for a system to monitor his parents' home, which is about a mile down the street from his house.

That's cheaper than a nursing home, and it brings him peace of mind, he said.

There are also ethical issues with monitoring people as they age.

Jennings, 49, said he made a pact with his dad to let him stay in his house -- which he's lived in for more than 40 years -- as long as possible. Jennings didn't feel safe about that arrangement without placing a network of monitors in the home.

But if it meant he could stay in his house, he would agree to it.

The younger Jennings said the system has proven useful.

Until recently, Robert Jennings lived in his large house with his wife, who has Alzheimer's and has since moved to an assisted living center. Before she moved to the center, Bob Jennings worried his mother would become disoriented and wander out of the house. He used a GrandCare network of sensors to track her and notify him if she broke from normal routine.

If she was out of bed for more than 10 minutes in the middle of the night, for example, he would get a call. And if she opened a door to the backyard, where there's a swimming pool, he would get a call on his mobile phone, work phone and home phone.

One night he got that call, and rushed to the house to find his mother fiddling with a latch that kept her out of the backyard.

"She could have walked right out there and fell in the swimming pool," he said.

Jennings said his dad has been able to stay in the home at least two years longer than he otherwise would have because of the monitoring system.

But it's not clear Robert Jennings understands the system.

His son had the sensors installed while his dad was out of the house so that he wouldn't worry. The 86-year-old users a touch-screen monitor that controls the system from the kitchen mostly to look at photos of his family members. Pictures of granddaughters in cheerleader outfits and his grandson on hunting trips flash across the screen while he eats breakfast.

The AARP supports these monitoring systems as a way for people to "age in place," but the group says adult children should have serious conversations with their parents about why they're interested in a monitoring system and the possible benefits.

Lee Tien, senior staff attorney with the Electronic Frontier Foundation, a group that advocates for privacy online, said rules need to be developed to ensure the personal data from these monitoring systems is protected.

"When data is being held by a third party, that also means it's susceptible to being subpoenaed by your insurance company or accessible perhaps by your employer or law enforcement or the IRS," he said. "Everyone can make up their own idea of who they wouldn't want to know all the things that the 24-7 record of the movement inside your home -- connected with monitoring devices -- would tell you."

Robert Jennings said he wants to do whatever he can to stay in his home.

"It's where I spent most of my time with my wife and raised my children," he said. Nearly every inch of available wall space in the home is covered with portraits of family members and pets.

Hall is a rare case in that he chose to install a system to monitor himself. Without it, he said, he would have to leave his home, which is stuffed full of beloved items he's collected over the years -- from porcelain birds to Chinese furniture and nude statues.

A tiny dog named Precious tails him everywhere he goes in the house.

But Hall likes knowing someone else is watching, too.

"It is the most secure feeling," he said.