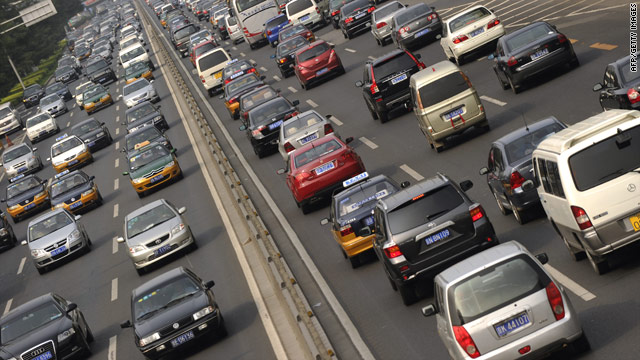 Scientists compare bending light around an event to enabling a pedestrian to cross a road without interrupting the traffic flow.
STORY HIGHLIGHTS

(CNN) -- New materials with the ability to manipulate the speed of light could enable the creation of a "space-time cloak" capable of masking events or even creating an illusion of "Star Trek"-style transportation, according to scientists in London.

The cloak, while currently only existing in mathematical theory, takes advantage of the potential properties of "metamaterials" -- artificial materials designed and manipulated at a molecular level to interact with and control electromagnetic waves.

Scientists have previously demonstrated that one possible use of metamaterials could be to render objects invisible by bending light around them. But Professor Martin McCall of Imperial College London says he has now extended the concept of invisibility to a cloak also capable of hiding events both in time and space.

"In some senses our work is mathematically quite closely related to the idea of invisibility cloaking," McCall told CNN. "It's just that we're doing it in space and time instead of just in space. It's added a new dimension to cloaking, quite literally."

In a paper published in the Journal of Optics, McCall said metamaterials made it theoretically possible to manipulate light rays as they enter a material so that some parts speed up and others slow down. This could create "blind spots" in time, masking an event. While the accelerated light arrives at a space before an event has happened, the rest of the light doesn't reach it until after the event.

"If you had someone moving along the corridor, it would appear to a distant observer as if they had relocated instantaneously, creating the illusion of a Star Trek transporter," says McCall. "So, theoretically, this person might be able to do something and you wouldn't notice."

Alberto Favaro, who worked on the project, compared the process to moving a pedestrian across a highway full of traffic by speeding up those cars already at or beyond the crossing point while slowing down the approaching vehicles.

We've provided a theoretical recipe ... It's up to the experimentalists to rise to the challenge.
--Martin McCall
RELATED TOPICS

"Meanwhile an observer down the road would only see a steady stream of traffic," said Favaro.

McCall said the theory could have practical implications in the future for quantum computing by opening up new possibilities for signal processing.

"If you have two channels that are carrying information, one of which has a continuous stream of bits on it, our technique can interrupt that stream and then process the other channel as a priority. So it can act as an 'interrupt without interrupt.' The original channels can then be seamed back together as if they'd never been interrupted."

The authors of the paper also joke that the "technology" would have its uses for criminals.

"A safe cracker would be able, for a brief time, to enter a scene, open the safe, remove its contents, close the door and exit the scene, whilst the record of a surveillance camera apparently showed that the safe door was closed all the time," they write.

The metamaterials necessary to create the perfect cloak are still many decades away, McCall said, while any prospect of upscaling the technology to conceal events even lasting a few minutes remains in the realm of science fiction because of the vast scale of the cloak that would be needed.

"Light travels at 100 million meters per second and in order to cloak it you'd need that many meters (of metamaterial), roughly speaking," he said.

But McCall said current optical-fibre technology could be used to construct a "poor man's cloak" capable of demonstrating "proof of concept" by imperfectly hiding events taking place over a few nanoseconds.

Ulf Leonhardt, a physicist working on the theory of invisibility technology at the University of St. Andrews in Scotland, said the paper was theoretically interesting but rejected the practicality of an experiment along the lines described by McCall.

"You'd need a very very strong light source and it's not something you can make with commercially available devices that you can buy for a standard university laboratory," Leonhardt told CNN.

But he said research activities in the field of invisibility had exploded since he first published papers on the subject in 2006. While optical cloaking technologies remained a long way off, there have been some very promising experiments involving cloaking soundwaves, he added.

"In acoustics you can definitely say this is working," said Leonhardt. "But it's still far away from being a practical technology for the optical range of the spectrum."