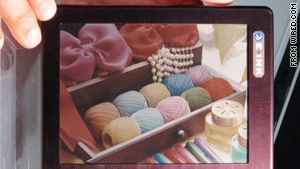 Hanvon is set to debut a color e-reader with a screen that is still easy on the eyes.
STORY HIGHLIGHTS
RELATED TOPICS

(CNN) -- E Ink screens, which are designed to be easy on the eyes, are used widely in electronic book readers like the Amazon Kindle and Sony Reader. But they never featured color displays until now.

Hanvon's e-reader will be available in China in March. It starts at $440, has a 9.68-inch, touch-sensitive screen and features 3G and Wi-Fi connectivity, according to that paper. The device may come to the U.S. eventually, but The Times does not say when it would be available.

Unlike the screens on phones and table computers, E Ink displays don't emit light, which some people prefer when they're reading for long periods of time. These paper-like screens have the advantage of being easy to read outdoors, since the sun reflects off the surface like it would on normal paper.

Table computers and laptops get hammered by critics for the fact that they're difficult to read in direct sunlight because of glare.

E Ink screens aren't perfect either, though. Reading in bed at night, for example, requires a book light or a lamp. Otherwise, the text isn't visible in the dark.

Color has become a topic of discussion in the e-book reader world recently, in part because of the success of Apple's iPad, a tablet computer that has a color LCD screen and doubles as a book-reading device.

That tablet, like some others, has a color display and can be used to browse the Web, watch videos and create presentations as well as read books.

Some analysts say color is important in the e-reader market.

When Barnes & Noble announced a color e-reader with a glowing LCD screen, James McQuivey, of Forrester Research, wrote that the availability of color e-readers may change the way some books are written:

"True, you don't need a color screen to read a Dan Brown novel. Or do you? Today's Dan Brown novels don't need color because they were written under the assumption that color wasn't an option. But his next book won't be. And the thousands of children's books in print that already depend on color fit nicely on this device."

"The reader uses a standard E Ink screen with a color filter, so it has the same low-power, lightweight, high-readability characteristics of its black-and-white cousins. But this also means the screen is more-or-less static: it can show color photographs, illustrations and possibly some animation, but not full-motion video. Without a power-hungry backlight, the colors won't be as bright as an LCD screen either."

Consumers are looking for the best of both worlds, Wired continues. They want some properties of E Ink and some of LCD color screens:

"Consumers want everything: vibrant color and full video with low power consumption and zero glare at an unbeatable price. Until that arrives, we'll continue to see both makers and readers in this space accepting tradeoffs and experimenting to find a balance that works."