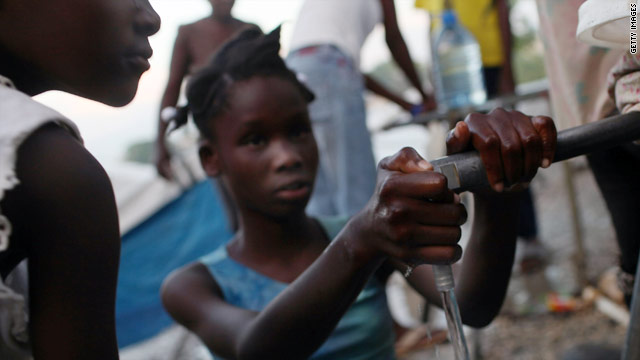 (CNN) -- Health workers trying to combat the cholera outbreak in Haiti are using unique technologies to communicate with potential victims and map the disaster.

Local cellular networks are sending out free text messages to people in affected areas, giving them tips about how to avoid infection and telling them what symptoms to look for. The texts go out in Creole and specifically target people in trouble areas and in tent camps, where the disease could spread rapidly.

And "crowd mapping" groups are using internet volunteers to assemble real-time maps of the outbreak by aggregating geo-tagged tweets and text messages.

A website called HealthMap, for example, is collecting data about the locations of clean water sources in Haiti via text messages and Twitter posts.

A group called the OpenStreetMap team also is riding motorbikes through the streets of Haiti, carrying GPS equipment to map schools and clinics properly so aide workers and locals know where to get treatment, said Sabina Carlson, who works with a network of crisis-mapping volunteers.

"That's human dedication," she said by phone from Haiti, "and on a technological level that's somewhat new."

The cholera outbreak in Haiti has killed more than 300 people and made more than 4,500 sick.

Cholera is a bacterial disease that spreads easily and can claim lives rapidly. It has caused particular international concern in Haiti because of an earthquake in January that killed 220,000 and left more than 1.3 million people living in tent camps or on the streets, according to the Red Cross.

With so many people displaced and living in unsanitary conditions without access to toilets, there's concern about a widespread outbreak, said Julie Sell, a spokeswoman for the American Red Cross in Haiti.

That's why getting information about how to prevent the disease out to people in tent camps and in cholera-infected areas is so important, she said.

The Red Cross last week set up a program to send Creole text messages twice a day to 300,000 people in internal refugee camps and to 35,000 people near the Artibonite River, which is thought to be a source of the cholera outbreak.

The United Nations is still investigating the exact cause of the outbreak.

Sell said 80 percent of the people in Haiti who were displaced by the January earthquake have access to a mobile phone, so text messages are one of the best ways to reach as many people as possible.

She noted that radio broadcasts and visits from health workers are also part of the information campaign.

Cholera has not been seen in Haiti for four decades, so people need to get information about cholera symptoms and treatment as soon as possible, said Carlson, the community outreach coordinator at the International Organization for Migration, a nonprofit group.

"Cholera is such a new disease here that we are really trying to get as much information out as quickly as possible," she said.

People living in tent camps in Port-au-Prince, Haiti, say they have been calmed by the text messages since they are often unfamiliar with the particulars of the disease until they get information from health workers, Carlson said.

On the mapping side of things, volunteers around the world are sorting through text messages, tweets and emergency response information to create real-time maps that can be used to push emergency aid to places where it is most urgently needed. Those maps are also available to local people with internet access.

These mapping networks were developed after the Haiti earthquake but have proven useful in the current cholera outbreak, too, said Kurt Jean-Charles, executive director of a Haitian software company called Solutions S.A., which has developed a website -- Noula.ht -- to map cholera reports.

"We wanted to provide a platform and have it available to reinforce our local capacity to face disasters," he said by phone from Haiti.

Cell phones also are being used to track the potential trajectory of cholera.

Haitian mobile provider Digicel is using data it collects about where mobile phone users are located to see where people who have visited cholera-affected areas of Haiti go after they visit those troubled regions, said Carlson.

That data could be used to project where cholera might go next, she said.

John Brownstein, an assistant professor at Harvard Medical School who also works on the HealthMap project, said these group-produced maps are emerging as a new way to track the spread of disease.

In aggregate, the reports -- which are vetted for reliability -- provide a never-before-seen picture of an outbreak as it unfolds, he said.

"It gives you a sort of high-level picture of what's going on," he said.