How to deal with an #epicfail 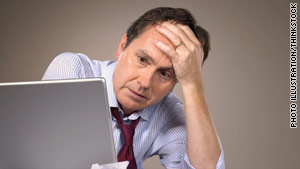 We couldn't find weapons of mass destruction in Iraq. We didn't predict the housing crisis. BP didn't prevent the oil spill. And, as is apparent to any Twitter addict, we love to write snobbish comments about how every internet blunder is an #epicfail.

But living in an era of devastating and mock-worthy screw-ups can be a good thing, says Kathryn Schulz, author of "Being Wrong: Adventures in the Margin of Error," who also writes a blog called "The Wrong Stuff" on Slate.com.

One of our biggest collective failures, she says, is pretending that people don't fail and treating failure as unacceptable.

Schulz spoke with me after a lecture Thursday at the PopTech conference, an event dedicated to fostering smart ideas in technology and social change.

(And it's an event, by the way, that started with a giant domino-effect demonstration that failed epically when a robot couldn't kick over the first in a long line of books).

The following is a list of five ways to deal with failure, taken from that conversation. Originally, it was going to be a Q&A. But after a phone voice recorder failed during the first question, I rethought that plan a bit. #cnntechfail

Figure out when you're wrong

Here's a common scene from Looney Tunes: Wile E. Coyote chases the Road Runner off of a cliff. The coyote runs across the air until he realizes he can't fly.

Then he looks down, discovers he was wrong to run past the precipice. Poof -- he falls.

When we're in the midst of being wrong, we're like Wile E. Coyote, Schulz says. We don't feel anything -- because we incorrectly think we're right.

The first step in dealing with failure, she said, is to realize that you're wrong. You can't do that by looking inward, because you'll always (wrongly) think you're right, she said.

You can illuminate failure by surrounding yourself with diverse -- if not a bit critical -- people who can tell you when that Lady Gaga meat-hat Halloween costume is just not working for you.

Also, turn to the internet, she said, since most arguments these days happen between two people and Google. A quick search may settle things. (Note: Bing works, too).

Go all kindergarten on yourself: Learn from mistakes

If your social network (and/or the entire internet) tells you that you're wrong, go with it, Schulz says. Don't cover it up or point fingers.

Our school systems need to do a better job of encouraging this kind of behavior, she said, but early education systems in particular are very focused on making students feel the need to be right all the time.

Getting a paper returned with red marks all over it unfairly labels certain students as failures, she said.

Also, take comfort in the fact that everyone fails.

Schulz referenced a theory to support this. It has a wackadoodle name: The Pessimistic Meta-Induction from the History of Science.

It basically means that almost every major scientific theory -- the Earth as the center of the solar system, for example -- is later proven to be at least partially wrong.

Scientists also tend to learn more from failed experiments, she said, than from test tube tinkerings that go just as planned.

The government is bad at failing, Schulz said. Elected politicians tend to dig their heels into partisan camps and rarely admit they've been wrong.

But some companies -- particularly those in the tech sector -- do a good job of trying to recognize a fail as soon as possible and adapt to make themselves stronger.

Google is one of many examples, she said. That company is known for putting its products in eternal "beta mode," meaning they're out for the public to test and troubleshoot. They're rarely polished and fail-safe.

Asked what she thought the "most awesome failure" in history has been, Schwarz referenced the Vikings, who saw an optical illusion, thought it was a land mass and chased that failure all the way across the Atlantic to "discover" North America.

Being willing to take risks and fail is how you win big, she said.

The idea applies to art, too. "You actually can't create anything good," she said, "without creating a lot of wrong stuff along the way."

Don't put too much trust in technology

People who (smartly) recognize their own fallibility tend to back themselves up with technology -- from smartphone calendars for the forgetful to autopilot mode in an airplane.

Backup is good, but a change in how our society views and plans for failure would be more useful than more safety-net technology, Schulz said.

Take the BP oil spill in the Gulf of Mexico.

Blow-out preventers -- contraptions designed to prevent such an oil spill in the case of a blowout -- did not work, for whatever reason. More helpful, she said, is realizing that failure can lead to catastrophe and planning for that in earnest, rather than just assuming tech has our collective back.

Don't be too snarky with those #epicfail hashtags

You've probably noticed the #fail theme on the internet. It's on Twitter. There's the now-famous Fail Blog. The People of Wal-Mart is arguably about fashion failure.

That's all healthy, Schulz said, as long as it doesn't get too snarky.

"All of those little 'epic fail' things, they're not snarky exactly. Like, you would expect them just to be snarky, like 'Oh, haha, look at all these dumb people.' That note can be in there. And to the extent that that note is in there, I think it's destructive," she said.

"I think it works against what I am working toward and what I would like to think a lot of people from the 'fail movement' are working toward, which is accepting and embracing these things as inevitable. And you're not going to do that if people feel embarrassed for doing it."