Google is testing cars that drive themselves 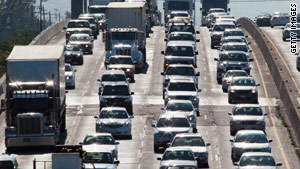 The vehicles have been tested on 140,000 miles of California road, from Silicon Valley to Santa Monica.
STORY HIGHLIGHTS
RELATED TOPICS

(Mashable) -- Google announced Sunday that it has developed cars that drive themselves automatically in traffic, and that it has been testing them on the streets of California for months. It might seem like an unusual project for Google, but it could actually have big benefits.

We're not just talking about cars running Google Android. This is the stuff of science fiction. The only accident that has occurred so far: One of the cars was rear-ended by a driver at a stop light. Human error!

The vehicles have been tested on 140,000 miles of California road, from Silicon Valley to Santa Monica.

Each car is manned during the tests. One person sits in the driver's seat, ready to take control of the vehicle instantly by grabbing the wheel or touch the brake should something go wrong with the system. The person in the passenger's seat is an engineer who monitors the software operations on a computer.

Google (Google) hired engineers who previously participated in competitions and races involving automated cars -- important turning points in the development of the technology, which has been coming into its own since around 2005 according to The New York Times.

If your first concern is one of safety, Google would argue that you're going about it all wrong.

Safety is one of the the project's purposes. Google believes that the technology could nearly half the number of automobile-related deaths because computers are supposedly better at driving than humans in the right circumstances.

There are other hypothetical pluses, too. The vehicles' instant reaction time and 360-degree awareness would allow them to drive closer together on the highway than humans can, reducing traffic congestion. They could be more careful when operating the gas, reducing fuel consumption.

But the biggest benefit for Google would be the hour or so of daily commute time the car owner would save. Instead of driving, he or she could either be productive or entertained in the vehicle, doing work on a wireless Internet (Internet) connection or watching television.

Google doesn't say it explicitly, but TechCrunch was quick to note that this time could be spent using Google products and absorbing Google-run advertising.

The most optimistic projections put this technology at least eight years away from market, though. Legal hassles are among the myriad problems; all of the current traffic laws assume that a human driver is present in the vehicle.

Do you think this technology will eventually be deployed, or is it just a pipe dream for Sergei and Larry? Let us know in the comments.