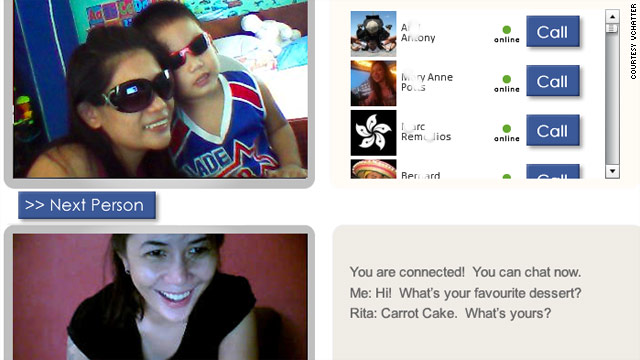 (CNN) -- Will Bunker says he didn't steal the idea for his Facebook app. He just re-created Chatroulette -- minus the naked people.

Bunker is the CEO of vChatter, a Facebook app and newly launched stand-alone website that pairs people up for semi-random video chats, much as the website Chatroulette does. The main difference: vChatter ties people to their Facebook identities in an effort to cut down on lewd behavior and nudity that have plagued Chatroulette since soon after it launched in November 2009.

"You look at it and you go, 'How does a 17-year-old kid get to 20 to 30 million users without outside capital?' and you go, 'There must be a huge demand for this product,' " Bunker said of Chatroulette, which was founded by Andrey Ternovskiy, a Russian teen. "It reminded me of Adult Friend Finder back in the '90s. You've got that version of things, and then you've got a cleaned-up version of that, which has much more appeal."

So Bunker, who made a name for himself in tech by creating an online dating site that later took the name Match.com, set out to tweak Ternovskiy's idea.

The best companies, he said, are not necessarily original.

"It would be really, really hard to have an original idea -- [where] it's totally original, nobody ever thought about it whatsoever," he said. "I'm from an engineering background, so I try to think in terms of problem solving. I take the parts and try to put them together in an interesting way."

His restructuring of the Chatroulette concept seems to be working. vChatter has attracted 2.5 million users, he said. Earlier this month, the company launched its website; the Facebook app debuted in May.

Chatroulette and vChatter essentially have the same setup: Visitors with webcams are set up with random video chats with strangers from elsewhere on the internet. Both let uncomfortable users click "next" to skip to someone new.

Where the sites differ is in the details. On Chatroulette, users are anonymous and the pairings are completely random. Anyone else who has logged on to the site with a webcam could be your next partner in digital parlor talk -- whether they speak your language and whether or not they're wearing clothes.

vChatter's pairings are only partially random, and the site ties users to their Facebook identities, so you know who you're talking to and, in theory, could report any suspect behavior (Chatroulette has been accused by tech sites as having a "penis problem" because so many men go on the site naked).

Bunker's app aims to cut down on inappropriate or unwanted interactions by putting users into chats with people who are somewhat like them. Users who are younger than 18, for instance, can be paired up only with other people who are listed as minors because of the age attached to their Facebook profiles, he said. Adults chat only with other adults.

The vChatter app also seeks to avoid language barriers. Facebook users have to enter the country where they live, and the app uses that information to try to set up conversations between people who are likely to speak the same language, he said. For example, a user registered in the U.S. might be paired with someone from England or Australia, but probably not Japan.

And, to combat pornography, vChatter takes screen shots from time to time to see what users are up to. The site also is considering using photo recognition to detect and ban images that are potentially pornographic, Bunker said.

But Bunker said truly random video chats are not as productive or enjoyable as the curated conversations that vChatter aims to set up.

"There's a difference between unexpected and totally random," he said. "I want to still have that delight factor so it won't be predictable but it will be more enjoyable than totally random."

Not everyone is convinced, however, that vChatter has improved upon an idea that Chatroulette was first to popularize.

"Unfortunately VChat seems to have similar pitfalls that Chatroulette did, namely some who use the app seem to have ulterior motives," Sara Inés Calderón writes on the blog "Inside Facebook," which tracks Facebook-related news. "On a recent Sunday half a dozen chat attempts yielded one woman and mostly men, several in various states of undress, looking for ... romance?"

Other Facebook apps and websites also set up semi-random video chats between internet users. And reports this week suggest Facebook may soon team up with Skype for voice and video chats.

Other news sites have been kinder in their reviews of vChatter.

Wired.co.uk says vChatter is "Chatroulette minus penises," and the blog TechCrunch declared it the "PG-rated version of Chatroulette."

"vChatter is hoping to use its model on Facebook to create a safer web platform for families and children," Leena Rao writes for TechCrunch. "And the site has seen significant traction on Facebook -- approximately 15 million calls have been established and average time on site is 4.5 minutes."

User reviews on vChatter's Facebook page are largely positive, with an overall rating of 4.6 of 5 stars out of nearly 19,000 reviews. However, several reviewers appeared to be soliciting romantic interactions.

"cool....... girls add me!!!" wrote one five-star reviewer, whose Facebook picture showed a man without a shirt on.

Still, Bunker is confident that vChatter has made it past the point when it would have turned raunchy. "We're 2.5 million people," he said. "I feel like we're already at a saturation point and we've already pushed through that initial cleaning it up, and the cost of [keeping it clean] is not prohibitive."

He is unapologetic about competing with Chatroulette.

"There will be winners and losers on it," he said. "It's kind of like football."