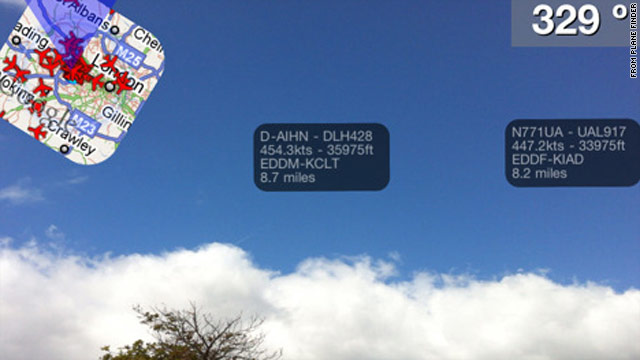 (CNN) -- Have you ever looked up at the sky, seen a plane zipping through the clouds and wondered, "Where the heck are those people going?"

A new smartphone app, while buggy for some users, may have answers.

Among the data presented to users: How fast the planes are moving, where they're going, where they started, their elevation, the flight number and how far the aircraft are from the person's smartphone at exactly that moment.

To accomplish this, the app employs "augmented reality" technology, which refers to an emerging -- and at times clunky -- category of smartphone apps that seek to overlay digital information on top of the real world.

Augmented reality apps let people essentially use their phones as a lens through which to view what's going on around them. The apps switch phones into camera mode, so users see a moving picture of the nearby environment. Then they take data from the internet and plot it on top of the picture.

So, for users of the Plane Finder AR app, a view of the sky is enhanced with gray blobs of information about flights that are zipping by, perhaps unnoticed from the ground.

Mark Daniels, CEO of Pinkfroot, the UK company behind the app, said Plane Finder is designed for people who are curious.

But he admits the app won't work well in all locations yet, particularly in the United States, where plane-tracking technology is behind that of Europe.

"It works better by the day. We put a new feed into New York and one's going across to Oregon and one to Florida in the next couple of days," he said, referring to new signal receivers that can be used to track planes and send data to the application.

Some users have given the app poor reviews, mostly because flight data is nonexistent in certain parts of the United States at this point.

"This app is junk!" writes one user identified as aromXxX.

"Waste of money!! Error message pops up every second saying no planes in area. I live in Boston how can that be?!?! Not worth it if it only tracks 1 or 2 planes when [Boston] has hundreds of flights a day!!!"

The app's page on the Apple App Store comes with a disclaimer that says people who are interested in the augmented reality app should first download a free version of the app, called Plane Finder, to see if the app works in their area.

Daniels said 10,000 people have bought the augmented reality app since its launch; the standard Plane Finder app, which shows flight info on a map instead of on top of a camera image, and Ship Finder, which does the same for boats, have a combined 250,000 users, he said.

Understanding how the new app works helps explain its problems.

Smartphones obviously can't "see" planes in the sky, so they have to use two data sets to triangulate the phone's location against the plane's.

The data about the phone's location and tilt is relatively easy to come by. Smartphones boast GPS sensors, accelerometers, compasses and, increasingly, gyroscopes that detect the phone's position.

Data about the planes, however, is trickier.

In Europe, Daniels said, most planes emit digital signals about where they are and where they're going. But in the United States, only some planes have been updated with this technology, making many of them invisible to the app.

Blair MacIntyre, an associate professor at Georgia Tech's College of Computing, said the app is technically sound and the lack of data is its problem.

"From a technical viewpoint it's actually a perfectly fine app," he said.

Daniels' company is in the process of installing sensors in the United States and in Europe to pick up these signals. The network is expanding, he said, but still does not encompass all areas of the United States.

When the flight info is available, he said, the app works well and has become popular with plane spotters and aviation enthusiasts.

He said it opens up new worlds of up-in-the-sky information.

"As long as we've got the data, it will work indoors as well and through clouds and fog and trees and stuff," he said.