Do-it-yourself solar power for your home 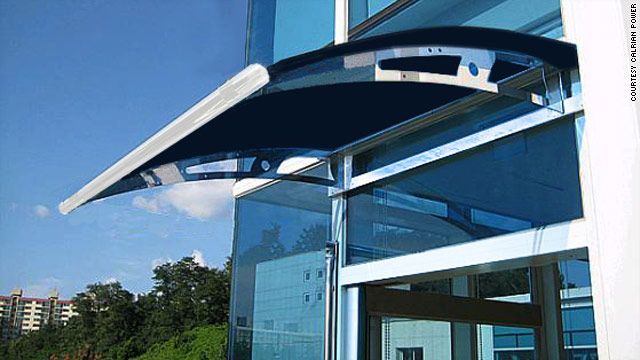 A rendering of how a solar panel might be mounted as an awning over a door or patio.
STORY HIGHLIGHTS

(CNN) -- Imagine outfitting your house with small, affordable solar panels that plug into a socket and pump power into your electrical system instead of taking it out.

That's the promise of a Seattle, Washington-based start-up that is working to provide renewable energy options -- solar panels and wind turbines -- for homes and small businesses. The panels cost as little as $600 and plug directly into a power outlet.

The company, Clarian Power, aims to be the first to bring a plug-in solar power system to the market, in 2011.

CNN talked with Maglaque to find out more about this system. Here's a transcript of our conversation, edited for length and clarity.

CNN: Can you give us some background on Clarian Power?

Maglaque: Clarian's mission is solar and wind power for every home. Renewable energy is completely out of reach for the average homeowner. For example, systems today cost $20,000 or $30,000. What we found is that homeowners really want to make a difference; they want to do something green; they want to offset their power bill, but these systems are just too expensive.

So what we've put together is a system where they can go down to their local [home improvement store] or work with their local utilities, if there are programs like that, and bring home two or three solar panels or a wind turbine -- if they have wind -- and plug that in without the parade of contractors or installers.

What makes your product line unique?

It comes down to simplicity and cost. We're talking the same cost as a home appliance vs. a home-equity loan.

It's also about the simplicity. Our system plugs into your existing wiring and can actually be up and running within an hour or two. So you bring that home from [your home improvement store], plug in the web access point, place the solar panel wherever you would like, whether it's in your home, your patio, or your garden.

Normally the barrier of entry just to start, to generate a single watt of power, is $20,000 to $30,000 and that's just completely out of reach [for most homeowners]. Here's a product that we're looking to have priced between $599 and $799 [for a basic installation].

Currently the biggest problem [for conventional solar systems] is that fixed upfront cost of $5,000 to $8,000 worth of installation expenses that ... you have to amortize against the power savings. What we're saying is you can do it yourself or have a handyman help and within an hour you can actually have it up and running.

A $600 entry fee is relatively low. Was that a major factor in the design, and how do government rebates factor in?

Certainly price was a factor in design, but we've turned the problem on its head. We've solved the problem of the upfront cost of installation. You're simply paying for the cost of the solar panel and the power module itself.

Our cost is largely driven by the cost of a solar panel today -- we're looking at $599 to $799, and if the price of solar continues to come down, that price will continue to drop. Whereas [with] the turnkey systems you're still going to have that $8,000 minimum.

We expect the average homeowner to buy around two or three solar panels. In terms of tax rebates -- based on a typical $799 installation -- it's a 30 percent tax credit, so that's a $240 credit off the top. And then depending on the state you're in -- we use California because they are the most typical in terms of solar and renewables, $2 per watt -- that's another $400 credit. So we're talking a net cost of being able to do this for under $200. Of course you have to wait for those tax rebates.

How expandable is this system?

A two- to three-panel setup will cost in the $1,800 to $2,400 range -- even that is a significant investment. Based on our research and the feedback we've had, we think that's where the sweet spot is.

This is not about net metering or sending power to the grid -- all the power is consumed within your home.
--Chad Maglaque, president, Clarian Power
RELATED TOPICS

Our power module will support up to 1 kilowatt, so 1,000 watts. The wiring in your home will support 1,600 watts -- what space heaters and air conditioners are limited to. The way we've designed this it's fully modular and you can daisy-chain them [together] -- so you can go down to [a home-improvement store] and buy just one, and then next spring [if] you and your partner decide you want get two more, you can do that as well.

So you can start out with as little as 200 watts and grow the system from there.

When will these be available?

We're going into production this fall and we hope to have our power modules available in spring of 2011.

Who do you think will be your main customers?

Our target market is homeowners and small-business owners. There are a lot of homeowners who want to do this. This is a product that I want; there are a lot of people just hungry to do something like this. We've been talking about this for 30 years and there's never been a solution for that.

Absolutely. One of the keys to this product is that it is portable. Similar to your cable in terms of installation, you bring it in, you plug it in and set that up as a renter, and if you move you can take it with you.

This is a powerful point for homeowners as well -- not only do they have to pay $20,000 to 30,000 [with a conventional system] now they're looking at a payback time frame as much as 15 years. There's not a lot of homeowners who can guarantee they're going to be in their home that long.

Here's something instead that when you move you can take it with and set it up when you get there.

The photo you sent was of an awning set up over the door -- would the unit come like that?

What we are putting together, and talking with solar panel manufacturers about, is a "Power in a box" solution. What that will come with is a solar panel, the mount, the power module and the web access point, which allows you to upload the data and track and monitor things.

What we're working on [design reflected in above photo] is a mounting that would go on the side of your home. With 20 or 30 solar panels, the only place to put that is on your roof, if you're talking two or three solar panels, that's something you could put on your home as an awning, put in your garden, or on a fence, wherever you choose.

The other thing is that by definition half the roofs in the country are facing the wrong direction, whereas every home or yard, typically, has a south-facing wall or some south-facing location where they could put that. We think a nice little spot is an awning over your deck, patio or in the garden.

Will you have a wind solution that is similarly easy to install?

We recognize that solar is the larger market, but wind is kind of sexy right now. So what we looked at is developing a wind solution: a 400-watt turbine about 48 inches tall. There are 13 million homes in the U.S. that have a viable wind resource (12 mph or greater), compared to about 110 million that have solar. We think wind is an option for some, so it is certainly something we want to offer and hope to offer a wind power in a box solution for late 2011.

How long until these units pay for themselves?

Four years or less. That includes tax cuts and rebates, and will obviously depend on the cost of your electricity. We've used California as a model; in states like Hawaii, where electricity [cost] is higher, the payback will be faster. Larger [conventional] systems are 8 to 15 years. Our installed [cost] is about $3.50 -$4 per watt where larger turnkey systems are $5-$6 per watt.

With the base model, the $600 single-panel setup, what's the monthly dip in energy cost? How much would it offset an electricity bill?

Thirty to 40 kilowatt hours per month translates to around $50 a year in energy cost savings. That's about the same energy to light your home if you're using high-efficiency lightbulbs. If you expanded that out to three or four or more solar panels, you could actually offset the cost of your electronics, or some appliances such as your microwave.

To be clear, this is not about net metering or sending power to the grid -- all the power is consumed within your home. It's really about slowing the meter down. It will make a material difference in what you are paying for on your power bill.

So how exactly does this work?

There are two primary components: We have our circuit monitor and web access point, which has to be on the same circuit as the power module. Then you can plug your solar panel on any outlet on that circuit in your home. That power can then be used anywhere in your home. That power will flow where needed, if your refrigerator comes on, it will go there. You are just supplementing the power coming into your home.

Are there any concerns about wiring capacity or issues that customers should be aware of?

These will be UL-certified devices, the same certification required for any device you plug into your home. It cannot generate power without the power grid in place, without that it won't send power back up the line, same if you unplug it -- you're not going to get electrocuted, or anything like that.

What makes our technology different from others is that we have built-in circuit protection. The circuit monitor checks that circuit to make sure we're not overloading that wiring. And we're limiting the power modules, at least initially, to 1,000 watts, which is well within the range of the wiring in your home.

What future applications are there for this technology? Could someone plug an electric car into this to charge it?

There are applications where you could plug this into your car. Of course, the power consumption of your car is many orders of magnitude compared to what this system could produce.

Wind and solar are the top ones we see coming into play, but there could be other options in the future. If Honda eventually comes out with a fuel cell generator you could use that, for example. We've built it to be agnostic to the power source -- it could be a fuel cell, a plug-in hybrid, or backup storage [like you might have for your computer]. And if someone comes up with cold fusion, that would work, too.