With new GPS dating apps, it's love the one you're near 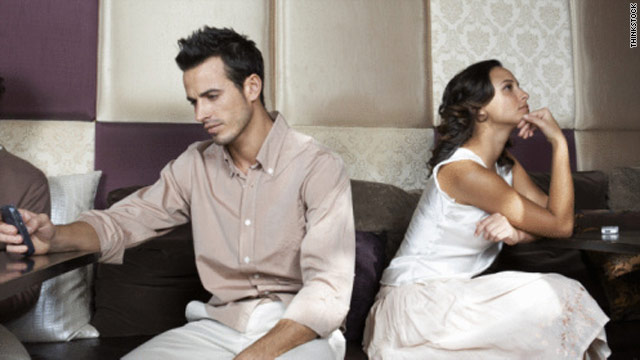 (CNN) -- There are many reasons people fall for each other: Personality, looks, humor -- sax-playing ability. But a new class of GPS-enabled smartphone apps is trying to bring dating back to the pure, data-driven basics.

In this new era of app-driven love, location is most important.

Take, for example, the story of Scott Kutcher and Amanda Segal. They started dating in March when, during a Jay-Z concert at Madison Square Garden, Scott pulled out his iPhone, opened an app called Skout and scanned a list of near-by women.

A grid of photos showed women who, at that very moment, were within a certain radius of Scott and his GPS-enabled phone.

And at the top of that list: Amanda, who was at the same show.

"It just so happened she was the closest one and she's cute," he said, noting that the app told him she was less than 1,000 feet away.

Scott and Amanda exchanged instant messages through the app. Amanda thought Scott was funny. She also liked the Ninja Turtles hat he wore in his profile picture. So the pair agreed to meet up for coffee after the show, and Amanda brought some of her friends along, just to be safe.

"He could have been a serial killer," she said. "I lucked out."

The two are now dating exclusively, and they credit the love-the-one-you're-near philosophy of Skout with setting them up.

Above all, it was convenient, they said.

"I wasn't going to go out of my way -- at all. I really wasn't," Amanda said of her willingness to search out a person to date. "I was like, 'Oh we're at the same place, why not discuss the show?'"

While established online dating services like eHarmony and Match.com go to painstaking lengths to match daters based on their exhaustive surveys of likes and dislikes, this new crop of GPS-based dating apps seems fixated largely on two qualities in potential mates: Proximity and convenience.

Apps like Skout, Grindr and StreetSpark let people sort through lists of potential daters based on where they are located at any given moment. All three services list the distance between the person using the app and other member users in feet.

If a person is listed as zero feet away, for instance, you might glance up from your seat at a coffee shop to see that person hanging out across the room. The apps tend not to say exactly where a person is located, and, on Skout and Grindr, you can turn off the location-aware feature if you choose.

Most of the apps rely on instant messaging as a way to break the ice before a real-world conversation takes place.

On these apps, users keep minimal profiles -- much less detailed than those you see on Facebook or MySpace. The main bits of information users are given about each other are photos, which are featured prominently, and locations, which usually are listed in the number of feet between you and the person whose profile you're searching.

While some dating experts express alarm at the idea of people giving out their relative locations to strangers, the trend of GPS-enabled dating appears to be increasing in popularity among young twentysomethings.

Skout, which has become one of the leaders in the space, boasts more than 1 million users, and the average age is somewhere between 24 and 25, said Christian Wiklund, Skout's founder and CEO.

The idea also has found unique traction in the gay community. A male-only app called Grindr says it has more than 900,000 users in 162 countries.

Joel Simkhai, the 33-year-old CEO and founder of that app, said Grindr users typically range from about 20 to 30. Simkhai said he created the app partly because he was having trouble finding men to hook up with and date.

Grindr has made meeting people faster and easier, he said.

"As humans, I think we value proximity. It's part of who we are. If somebody's 200 feet away from you, then go meet them, go say hi for five minutes. There's no need to have e-mails back and forth, SMS's back and forth," he said. "The incentive is just to go meet."

In effect, Grindr also works as a kind of digital "gaydar," allowing people who are interested in same-sex relationships to identify each other without the awkwardness of having to ask someone if they're gay or not.

"It takes a lot of the guesswork out of it," said Zachary Rosenkoetter, a 22-year-old from Tallahassee, Florida, who met his boyfriend on the app.

All of the location-based dating apps serve as "icebreakers" for conversations that might not happen otherwise, said Wiklund, Skout's founder.

"I don't know if it's 'lazy,' per se, but when we designed Skout we really wanted it to be similar to how you meet people in the real world," he said. "You can engage with people, you can chat, you can wink and flirt and then help out with extra tools."

Some relationship coaches, however, question whether the GPS dating apps are anything more than a fad.

Many women are unlikely to use such apps because they may feel threatened by notes from strangers who know more or less where they are, said Arthur Malov, a dating coach in New York City.

For point of reference, Skout, which launched in the summer of 2009, is about 60 percent male and 40 percent female, according to Wiklund.

The idea that single people would need ways to identify themselves as approachable has an analog precedent, Malov said. In the 1970s, he said, single people wore bracelets to indicate that they were single and open to being approached romantically. But the system felt threatening for women, he said, and was abandoned rather quickly.

In the gay community, a similar system of wearing bandanas to indicate sexual preference also caught on in decades' past, when people were less open about being gay. That system of identifiers is still used in some cities.

There are some concerns about these new dating apps being used by predators who may have access to a person's general location.

But Wiklund said those worries are overblown.

"This is really not more dangerous than Match.com, but even on Match.com you need to have common sense," he said. "If this person wants to meet with you at 4 a.m. in an empty parking lot, maybe you turn down that offer."

Amanda Segal, the Skout user from the Jay-Z concert, said it's easy enough to tell if someone using a dating app is a predator or a potential love interest.

"In the IMs, you could really tell right away if somebody was a creep," she said.

She's surprised by how much she and Scott have in common. Both attend Hofstra University -- Amanda as an undergraduate and Scott in the law school.

"I personally really like talking to strangers -- cab drivers and stuff like that, not creepy people," she said. "So it was like, 'Oh wow, it's a random person at this show, too. You can't figure out who's single by looking around."

She added: "I would never have met him any other way, so I'm happy."