Could pollution-eating concrete clean up our urban jungles? 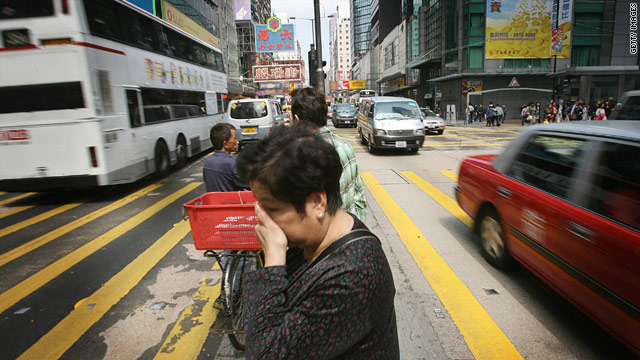 Urban pollution continues to grow despite stricter regulations in many cities. Could a solution lie at ground level?
STORY HIGHLIGHTS

Scientists at Eindhoven University of Technology in the Netherlands have developed a paving material that actually eats pollution, claiming it could soon become a crucial tool for improving air quality in urban areas.

The problem in many cities is that vehicle exhausts emit nitrogen oxides, which cause acid rain and smog that damages not only human health and quality of life but also the fabric of buildings.

But the new concrete is coated with titanium dioxide, which is a photocatalytic material, meaning it removes the nitrogen oxides and uses sunlight to convert them into harmless nitrate that is washed away by rain.

"In our tests we have found nitrogen oxide reductions of 35 to 40 percent in areas paved with the new concrete," Professor Jos Brouwers of the Department of Architecture, Building and Planning at Eindhoven University of Technology told CNN.

Titanium dioxide is already commonly used to coat surfaces that are hard to clean -- it is a component in some paints -- because it functions as a self-cleaning chemical, meaning the new concrete has the additional advantage that it breaks down algae and dirt so its surface stays clean.

Brouwers' discoveries are part of a race to explore new ways of using new technology to mitigate pollution. Chinese researchers are believed to be experimenting with nanotech polymers to coat exhaust pipes, and others across the world are experimenting with titanium dioxide.

Following extensive laboratory tests the pollution-eating concrete has now been trialed in the Dutch town of Hengelo, where 1,000 square meters of the road's surface were covered with air-purifying paving stones.

As a control, another area of 1,000 square meters was surfaced with normal concrete paving slabs. Samples were then taken from the air at between 0.5 and 1.5 meters above the surface.

"The air-purifying properties of the new paving stones had already been shown in the laboratory, but these results now show that they also work outdoors," said Brouwers.

"[The concrete] could be a very feasible solution for inner city areas where they have a problem with air pollution. We will continue measuring to the end of the year because the authorities need to be convinced it is a feasible technology.

"Air quality is an important issue and they know it is something important to consider."

The paving slabs used in the tests have been made by, and co-developed with, manufacturer Struyk Verwo Infra, and are already available for use. But the applications of the technology are not limited to paving. Where an asphalt surface is required, the concrete can be mixed with normal asphalt and, according to Brouwers, it can also be used to make walls.

"You can apply it very easily in the normal production," says Brouwers. "It doesn't require any maintenance; it doesn't wear off with normal use."

Predictably the material is around 50 percent more expensive than normal concrete, but Brouwers is adamant that when the total cost of fitting is included, the overall increase in cost is only 10 percent.

"Sure, it is slightly more expensive, but if you look at the total pavement costs where the stone is one part -- there is also labor, foundations etc. to calculate -- then you are only looking at a slightly higher cost," he says.

Some may argue that it is more important to try and tackle pollution at the source rather than mitigate its effects. But Brouwers sees the new concrete as a pragmatic response to a very real problem -- a second line of defense -- and one element in a suite of measures that should be adopted to improve air quality in our cities.

"Cars are subject to more and more stringent regulations all the time, and they are becoming cleaner; so are factories," he says.

"But at the same time air regulations are becoming stricter and stricter and in many busy streets the air quality standard is still failing, so [the concrete] is a valuable addition.

"Of course you have to treat [pollution] at the source, but standards are so strict now and air quality regulations are still not met, so [the concrete] can be useful."