We're running out of internet addresses 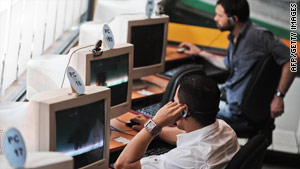 Experts warn we may run out of internet addresses within a year.
STORY HIGHLIGHTS

(CNN) -- Don't panic, but we're running out of internet addresses.

Not domain names -- those website names that you see at the top of this page and which always start with some semblance of "http://" and "www."

We've got plenty of those.

But, according to statements from prominent internet thinkers this week, we may run out of internet protocol -- or IP -- addresses in less than a year.

IP addresses are numbers assigned to all of the devices -- computers, phones, cars, wireless sensors, etc. -- that log on to the internet.

According to the blog ReadWriteWeb, the internet is changing and evolving so quickly -- with so many new types of devices connecting -- that we're running out of numbers to assign to all of these Web-enabled electronics.

"The main reason for the concern? There's an explosion of data about to happen to the Web thanks largely to sensor data, smart grids, RFID and other Internet of Things data," Richard MacManus writes on that site.

"Other reasons include the increase in mobile devices connecting to the Internet and the annual growth in user-generated content on the Web."

Only 4 billion internet addresses are possible under the current system, and those will all be exhausted in less than a year, John Curran, president and CEO of the American Registry for Internet Numbers, told ReadWriteWeb.

"We are at a cusp, I think, in the IP address space for internet," he said, noting that, if nothing changes, a "black market" for these internet addresses may develop.

So what should we do about this numbers shortage?

Our current system for assigning IP addresses, which look like a series of four numbers with periods between them, can only handle 32 bits of data.

But, to accommodate the sprawling nature of the Web, internet researchers are working on a new version of the system -- called IPv6, for "version six" -- which would allow many more IP addresses, with each holding 128 bits of info.

On The Atlantic's website, Alexis Madrigal writes that the situation is somewhat similar to what phone companies faced in the 1980s and 1990s: We ran out of new phone numbers, so we had to add digits.

"The problem is essentially the same: you only have so many unique slots, and those slots eventually run out as phone numbers proliferate," he writes.

But the current situation has proven more technically complicated than that.

Researchers have been working on IPv6 for more than a decade, but according to reports on the matter, adoption has been slow.

Now, some writers are comparing the situation to Y2K. They say we need to act now to shift to the new system or the internet might stop working.

Madrigal, for one, says he's optimistic the internet won't break because of a lack of IP address numbers.

"There are undoubtedly a swarm of issues leading to IPv6 underdeployed," he writes. "But that's actually good news because it means there will be plenty of ways to fix the problem when everyone swings into action."