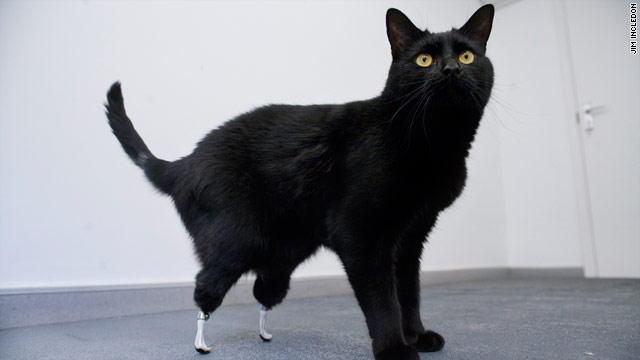 This cat, whose hind paws were accidentally severed, has been fitted with a new pair of artificial feet.
STORY HIGHLIGHTS
RELATED TOPICS

(CNN) -- If cats have nine lives, they may have just acquired a 10th -- thanks to a groundbreaking surgery that saved the life of a feline double amputee.

A British cat, Oscar, has made a full recovery after being fitted with a pair of prosthetic feet in November. The cat's hind paws were severed by a combine harvester.

The three-hour procedure, performed at an animal hospital in Surrey, England, by neuro-orthopaedic veterinary surgeon Dr. Noel Fitzpatrick, could serve as a model for human amputees.

Oscar's custom-made implants, ITAPs (Intraosseous transcutaneous amputation prosthetics), were modeled after deer antlers, which have a honeycomb structure that bones can grow through and skin can grow over.

By using computer-generated technology, a team of veterinarians and scientists designed a feline foot that mimics the way a cat walks and runs.

Oscar's implants were attached to his bones and then covered by hydroxypatite, which allows bone cells to grow onto the metal. Skin can then grow over the ITAP to form a seal against bacteria and keep infections at bay.

Custom-built paws were attached to the end of Oscar's prostheses, allowing him to run and jump like normal cats. One video of Oscar walking on his artificial feet has attracted more than 346,000 views on YouTube.

Fitting a cat with a prosthesis at the joint below the animal's ankle is a procedure that had never been performed, said Fitzpatrick, who waited seven months to announce news of Oscar's surgery because he wanted to see how the cat would recover.

The ITAPs, made from titanium aluminum, were first developed by a team of scientists at the University College of London, led by Professor Gordon Blunn.

Oscar's masters, Kate and Mike Nolan, were referred to Fitzpatrick by their local veterinarian in Jersey, England, after Oscar's accident last fall. They decided to proceed with the complicated surgery, knowing it could positively affect human medicine.

But first, Oscar's life-threatening injuries had to be treated and a course of antibiotics administered.

"We had to do a lot of soul-searching, and our main concern has always been whether this operation would be in Oscar's best interests and would give him a better quality of life," said Kate Nolan in a statement released by the animal hospital.

"Through our own background reading, we were aware that this sort of procedure is cutting-edge and also has an impact on human medicine," added Mike Nolan in a statement. "So knowledge about the way that Oscar's been treated can be carried over to human treatment going forward, so that's good for everyone."

While the surgery can benefit humans, Fitzpatrick said his decision to treat Oscar was made first and foremost to save the cat's life.

"He is the most remarkable cat. You can see that he desperately wanted to live," he said.

While many animals can live with only three limbs, it would have been impossible for Oscar to survive with only two limbs, Fitzpatrick said.

Although Oscar's life was insured for 4,000 British pounds (approximately $6,070), Fitzpatrick dedicated much of his time and hospital resources at no cost to treat Oscar.

"As long as it's in the interest of my patient, if everything works well, we can apply this to human victims," he said.

Oscar has adjusted well to his new legs, Fitzpatrick said, although he'll remain an indoor cat.

He may not chase mice like he used to, but he can still scratch up the furniture.