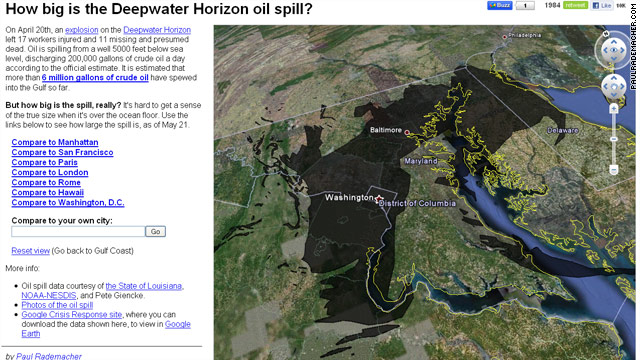 A program by a Google Maps engineer lets users compare the size of the Gulf oil spill to well-known places like Washington.
STORY HIGHLIGHTS
RELATED TOPICS

(CNN) -- With maps, apps and databases, the online community is working to help show the world the scope, and damage, of the Gulf Coast oil spill.

An April 20 explosion at an offshore oil rig owned by BP began dumping oil into the Gulf, with some rising to the surface and reaching the fragile wetlands along the coast of Louisiana.

Millions of gallons have spilled, and some estimates say it's already bigger than the notorious Exxon Valdez spill off the Alaskan coast in 1989.

Paul Rademacher, engineering director for Google Maps, said that in the wake of the disaster, he felt descriptions of the amount of oil gushing into the Gulf were hard to understand.

"The usual numbers are barrels-a-day ... there were some statements about how many Olympic-size swimming pools it would fill up, the equivalent of when we talk about football fields for length," said Rademacher, who has been at Google since 2005.

His idea was to use Google's global-mapping feature to put the massive spill into perspective. His program overlays the size and shape of the spill onto maps of major cities like New York or Los Angeles and also lets users compare it to their hometowns.

See the map and use it to view the spill in relation to your town.

A map centered on New York City shows a black splotch covering the city and stretching south into New Jersey and northeast over slivers of Connecticut.

It's familiarity with the map that brings the scope of the spill home, Rademacher said.

"Looking at the map itself, it's hard to get a sense because it's ocean," he said. "Even though the coastline of Louisiana does appear, I don't have any real sense of how big that is.

"But I live in the San Francisco Bay area, and if the spill occurred here, I'd have a sense of it because I could see San Francisco."

Rademacher had previously worked on Google efforts to chart damage, and response efforts, during the earthquakes in Chile and Haiti.

Also unveiled this week was Oil Reporter, a new app for the iPhone and Android smartphone systems that lets residents of the Gulf Coast upload photos and videos of what they see, along with messages about it.

They can rank the amount of oil they find, with zero meaning clear water and 10 representing thick oil.

"It's all about sharing what you see and allowing that information to be shared back out to [the] world to provide greater situational awareness for all and encourage better decision-making by authorities and response organizations," reads the website for the app.

All data from the app is being compiled by San Diego State University's information and technology center.

CNN's iReport also is collecting images of the spill to help the network track its scope.

A map of iReports that have come in so far shows a swath of images stretching from the banks of Louisiana's Red River to Panama City, Florida. Some offer suggestions on how to fix the spill. Others show quarts of oil washed ashore or, alternately, show viewers pristine beaches that have not yet been hit by the spill.

These initiatives follow other high-tech efforts to track the oil's spread.

An environmental group called the Louisiana Bucket Brigade launched an online map in early May to show the breadth of the oil spill's impact. And Google has assembled a multilayer map of information about the Gulf oil slick.

Rademacher said he's been surprised at the impact his mapping has had on some people far removed from the reality of the spill.

"One of the surprises after I released this is the feedback," Rademacher said. "Searching Twitter comments to see what people are saying, I see where it's depressing, scary.

"It's clear to me that this [the scope of the spill] is a shock for people."