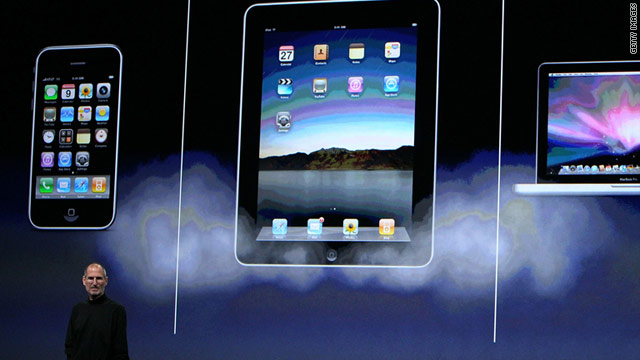 There's no getting around the fact that the iPad has completely redefined what a "tablet computer" could be.
STORY HIGHLIGHTS
RELATED TOPICS

(WIRED) -- When this year began, we were feverishly speculating about an Apple tablet, looking forward to 3-D TV sets, and optimistically waiting for the end of the cable companies' cruel grip on our wallets.

We had to settle for one out of three. While manufacturers did release a handful of 3-D TVs, there's just not enough content (either on cable or Blu-ray) to justify purchasing one yet. The heavy, expensive glasses you need to buy don't make the proposition any more attractive, either.

And as for getting all our video from the sweet, ever-flowing bounty of the internet? Sure, we still do that -- when we're at work. But at home, internet TV is still struggling to stand on its own. The gadget we'd pinned our hopes on, the Boxee Box, is unfinished and buggy. Google TV is hampered by the unwillingness of the TV networks to play ball. Apple TV remains locked into its own little iTunes-centric world.

So that leaves the Apple tablet. If you'd told us in December 2009 that we'd be using the word "iPad" every day without giggling, well, we would have giggled at you. But there it is: There's no getting around the fact that the iPad, silly name and all, has completely and successfully redefined what a "tablet computer" could be.

But the iPad was far from being the only big gadget news of the year. E-readers, cameras, and even exoskeletons made huge strides in 2010.

With a brighter, higher-contrast screen and a svelte, understated design, Amazon has finally nailed the Kindle. For now, this is the e-reader to beat.

There's still room to debate the virtues of E Ink (long battery life, paperlike readability) versus LCD screens (bright colors, no need for an Itty Bitty Book Light in the dark), but on balance, if it's reading you'll be doing, theKindle is tops.

The company removed further objections to would-be purchasers by dropping the price to $140 (for the Wi-Fi edition; with free 3G wireless it costs $190) and continuing to expand its collection of e-books. And, of course, it's hard to visit Amazon.com without being blasted with offers to buy a Kindle -- so it's no wonder that it's become the company's top-selling product.

The Kindle can even read PDF files and (with some conversion help) the open-source EPUB format. It's surprisingly versatile. -- Dylan Tweney

You might be thinking, "What's a point-and-shoot doing on a top-10 list?" That's how good Canon's PowerShot S95 is: It's a camera that gives amateur shooters pro-baller status.

Most important is the cam's glass. It's got a 28-105mm equivalent lens, so there's a nice wide angle at the short end, perfect for large group shots and landscapes. -- Mark McClusky and Brian Chen

Call this the surprise hit of the season: The first Android-based tablet to be a credible contender to the iPad, the Galaxy Tab is a remarkably usable tablet that's got a lot going for it. It's considerably smaller than the iPad, with a 7-inch diagonal screen compared to the iPad's 9.7 inches. But with an almost identical 1024 x 600 pixel resolution, it's got just as much screen real estate -- and it's a good deal more portable.

Add the full Android market, a decent camera, the ability to turn itself into a mobile hotspot, and a removable microSD card slot, and you've got bragging rights that your Mac-loving friends can't match.

And although Steve Jobs sneered at the diminutive size of 7-inch tablets, there's clearly a market for them: The Galaxy Tab sold 1 million units in its first two months. -- Dylan Tweney

Steve Jobs called the new MacBook Air the future of computers, and we like where this is going. Coming in 11- and 13-inch flavors, the MacBook Air weighs less than 2.5 pounds, with a wedge shape that thins down to just a tenth-of-an-inch.

Most importantly, it ships with a flash drive, which makes the Air a surprisingly zippy performer for its size. And at an attractive starting price of $1,000, who wouldn't consider one of these as their next notebook? We look forward to the wave of low-priced, ultrathin laptops coming from competing manufacturers in the coming years. -- Brian Chen

Tainted by early reports of a faulty antenna, Apple's latest iPhone was perhaps the most controversial product of the year, but nonetheless a resounding crowd pleaser.

Reviewers sang praise for the device's gorgeous "retina" display, which makes reading from a digital screen as pleasing as a glossy magazine page. Add to that a front-facing camera for video chat, a fast A4 processor and iOS 4, which enables multitasking, and the iPhone 4 is a killer upgrade.

Its debut was made more dramatic than usual by the accidental loss -- and subsequent publication on Gizmodo -- of a late prototype, several weeks before the phone's official launch. The consumer electronics industry is notoriously tight-lipped about its upcoming products, and no company exerts tighter control of its messaging than Apple. Gizmodo's scoop was a rare exception to the rule.

Despite the leak, and despite claims about a "death grip" causing the phone to drop calls, the iPhone 4 was Apple's hottest iPhone yet, selling 14 million units in just one quarter. -- Brian Chen

It's bigger, beefier and more badass than almost any other phone we've tested this year. And thanks to its 4G connection, 4-inch screen and ability to beam out a Wi-Fi signal, the Sprint Evo makes an excellent traveling companion.

Granted, Sprint's 4G network isn't available everywhere in the United States yet, but the company has been lighting it up in an increasing number of metro areas. When it works, it delivers enough bandwidth that you might be tempted to cut your wired broadband connection.

The Evo's downsides include its bulk (though some people actually like that) and disappointing battery life. -- Dylan Tweney

In the wake of the iPhone revolution, Microsoft's Windows Mobile OS tanked in market share, and the software giant decided in 2008 to scrap everything and start over.

The company hired new managers, opened new lab facilities and shuffled around its entire mobile team to create a new Windows phone OS in a year. The result was Windows Phone 7, Microsoft's brand-new entry in the smartphone game.

Based on a fresh tile-based interface, Windows Phone 7 is an impressive start. It shines brightly on the lightweight Samsung Focus smartphone, which has a beautiful AMOLED screen and a solid overall construction.

Microsoft is pinning its mobile hopes on Windows Phone 7. If the Focus is any indication, it's got a good shot at getting back in the game. -- Brian Chen

Microsoft's Xbox add-on, formerly known by its code name of "Project Natal," may have been a latecomer to the motion-sensitive gaming category. But when it arrived, the Kinect blew Sony and Nintendo's wand-waving accessories out of the water.

Combining a visible-spectrum camera and an infrared sensor, the Kinect offers the most advanced real-time 3-D scanning and rendering we've seen in a commercial product. It's also got built-in face recognition. The upshot: Your Kinect can recognize you, and you can control it simply by waving your hands and moving your body.

The possibilities are even richer for game developers and hackers, who are already figuring out how to incorporate the Kinect's features into eye-popping demos and surprisingly intelligent robots. -- Dylan Tweney

The feel-good gadget story of the year, without a doubt, was a lightweight exoskeleton from Berkeley Bionics that can help paraplegics walk again.

At the company's press conference, a person who'd been paraplegic for 18 years demonstrated the eLEGS by walking around onstage.

Her smile shows you everything you need to know about this remarkable invention.

You probably can't buy one, as it will cost around $100,000. But it's the sort of thing that a hospital or physical therapy clinic might buy to help people do rehabilitation exercises, which can be especially beneficial for people who were recently injured. That's because the eLEGS can help them get started on load-bearing, upright, walking exercises while they still have the muscle memory for walking.

The eLEGS exoskeleton is not the only such device: A company called ReWalk makes a similar, $100,000 gadget that appeared on Glee this month. -- Dylan Tweney

Thanks to Apple's iPad,2010 was the year of the tablet. The 9.7-inch touchscreen wonder created a brand-new product category that made digital content more attractive than ever.

The iPad checked off all the boxes where previous tablet computers completely missed the mark. Unlike its stylus-driven predecessors, the iPad offers a finger-friendly interface that people of all ages can learn in a few seconds, requiring zero antivirus software and barely any maintenance (apps update themselves with the tap of a button). In other words, it was the first true tablet -- not just a PC with a touchscreen skin.

The market reacted strongly. Publishers lined up to reinvent their magazines and newspapers for the shiny device, programmers embraced another new digital frontier to make innovative apps and games, and several competing manufacturers announced plans to whip up tablets of their own.

More controversially, the iPad extended Apple's dominion over its phenomenal media distribution channel, the App Store, for better and for worse. The tablet's beautiful 9.7-inch screen opens new possibilities for content creators to make money by selling apps through the App Store, but every so often Apple cracks the whip, demanding programmers to follow the company's vaguely stated but stringently applied rules. In short, the iPad unlocked an exciting opportunity for digital innovation, while also posing an alarming threat to creative freedom.