Online WikiLeaks game is a hit 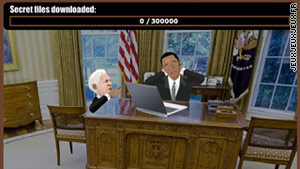 (CNN) -- A computer-game parody of the much-talked-about WikiLeaks saga has made a splash online.

In the online game, players assume the role of WikiLeaks founder and outsized personality Julian Assange hiding behind President Obama's desk in the Oval Office.

Using their mouse, players must manipulate the Assange character to smuggle secret documents from Obama's laptop onto a USB drive as the president dozes off. Those who fail are treated to a juicy presidential sound bite and a mock story planted in the newspaper.

More than a million people have visited the website for "WikiLeaks: The Game" since it was posted five days ago, developer Sebastiaan Moeys, 21, told ABC News.

"Just like governmental attempts to quash WikiLeaks, the game is harder than it looks," wrote Alexia Tsotsis on the tech-news blog TechCrunch. "I've played it five times and I still haven't won."

Game developers have been quick in recent years to capitalize on the popularity of prominent news events.

Satirical animated games have spoofed Tiger Woods' extramarital scandal, the Hudson River plane landing, the Chilean mine rescue and the rescue of a ship captain from Somali pirates.