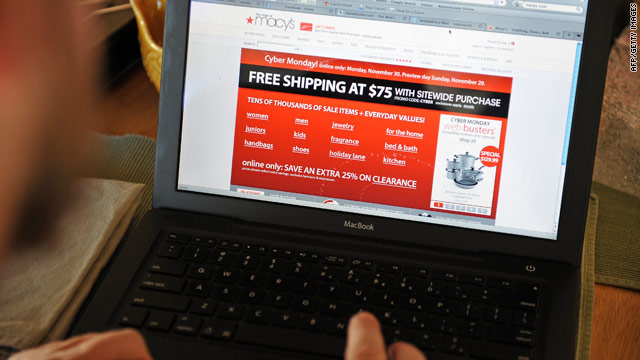 Will you sit and surf or dash for deals?
STORY HIGHLIGHTS

(CNN) -- Kenji Onozawa went to Best Buy at 4 a.m. on Black Friday last year searching for discounts on a Blu-ray player and a netbook.

Supplies of those hot items ran out before he reached the front of the line, however, and he left the store, sleepy and disappointed, with only a "Lion King" DVD in hand. All told, he said, it was "possibly one of the most miserable experiences" he'd ever had.

This year, Onozawa has given up real-world shopping. He plans to do all his gadget buying online.

"I can shop from my bed instead of waking up at 3 a.m. to wait out in the cold for three hours to fight everybody for 20 percent off more than that," the 29-year-old said by phone from Seattle, Washington, where he lives. "All I need is ... my pillow and my iPad and I'm good. I can do all the shopping wherever I am."

While Black Friday -- the day after Thanksgiving in the United States -- is one of the biggest retail shopping days of the year, tech-smart consumers are increasingly turning to the internet for the best gadget deals. Last year, 84 million people in the United States went online from mid-November to mid-December to shop for gift items, which was up 12 percent over the year before, according to comScore, a company that tracks online traffic.

Furthermore, the growth in online purchases is expected to outpace that in brick-and-mortar stores this holiday season. Analysts are predicting 9 to 16 percent increases in online sales, compared to a 2.3 percent increase in real-world spending, as calculated by the National Retail Federation.

Attribute part of the trend to practicality, since people like Onozawa can stay in their PJs to shop instead of throwing elbows in madhouse crowds.

But penny-pinchers may also be driving the phenomenon. Many of the best discounts on electronics -- especially big-ticket items like TVs, laptops and gaming systems -- are found on the internet, not at retail stores.

Online discounts "are as juicy or even more appealing than what some of the retailers are promising on Black Friday," said Mike Gikas, a senior editor for electronics and technology at Consumer Reports, the nonprofit group.

Gikas advised people to stay away from the Black Friday mania "unless you like rubbing against people you don't know -- or getting trampled."

On the internet, particular days seem to have less importance than at retail stores. Wal-Mart, Amazon, Target and Best Buy are already offering online discounts on electronics that may match or beat Black Friday prices. Target.com, for example, is selling a Samsung HDTV for $50 less than Wal-Mart's advertised Black Friday discount price of $500, said Dan de Grandpre, editor-in-chief at DealNews, a website that tracks product discounts.

Other online deals may not surface until mid-December.

Because retail stores have overstocked their supplies of TVs, merchandise shouldn't run out and "the deals will get better, guaranteed, as you get closer to Christmas," said Gikas.

Some discounts may pop up online on Friday, in tandem with in-store deals. Apple, which isn't known for discounting its high-end products, says it will have a one-day online sale at Apple.com on Friday. The ad on its website makes no mention of a companion sale in Apple retail stores.

In recent years, a phenomenon marketers call "Cyber Monday" has emerged as a sort of online holiday shopping event. On the Monday after Thanksgiving, legend has it, consumers rush to the internet -- presumably from their workplace computers -- to shop for the rest of their lists.

But experts say that shopping holiday is largely bunk. The internet tracker comScore said Cyber Monday never has been the biggest online shopping day of the year. That day typically comes on a Monday in December, said comScore's senior director of industry analysis, Andrew Lipsman.

For people shopping for technology gifts both online and at real stores, there are a number of apps and websites to help the search.

Several websites, like DealNews, RetailMeNot and DealDump, aggregate online shopping deals in one place so consumers can find them.

But a simple internet search for a specific product may be all you need to come up with a good price comparison, said Ramon Llamas, a senior research analyst at IDC, who recommends tech consumers avoid Black Friday entirely.

Smartphone apps and social shopping sites also are empowering consumers in new ways. The apps RedLaser and ScanLife, for example, let users scan product barcodes in brick-and-mortar stores and then see a list of websites that are selling that exact item, often for less money or without sales tax, as Slate's Farhad Manjoo points out.

Llamas said the smartphone is one of the consumer's "most valuable weapons."

"The best thing is you have your handy dandy barcode scanner app," he said. "Let that be your guide. Go to one store, look up the product and say [to a store employee], 'What can you do for me?'"

"It's something consumers have come to expect," he said.

Onozawa, the Seattle shopper, is on the lookout for Microsoft's Kinect gaming add-on, an HDTV and maybe an MP3 player this holiday shopping season.

Instead of hunting around stores, he's watching Twitter feeds and browsing websites in hopes that he'll get the best deal.

"I'm already shopping online," he said, adding that it's easier -- and less terrifying -- for him than bumping shoulders with the retail mob.