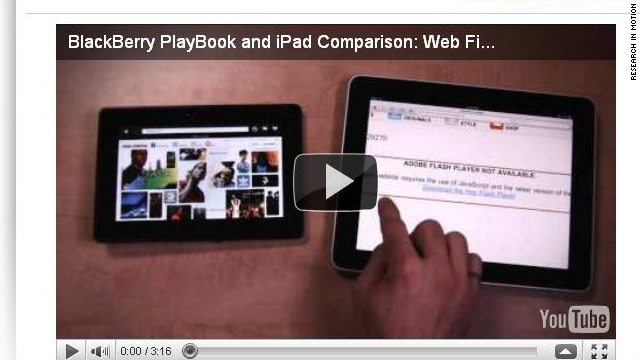 (CNN) -- Hoping to improve its footing in the burgeoning tablet wars, RIM on Tuesday released a video that it says shows its forthcoming BlackBerry PlayBook outperforming Apple's iPad.

In the video, posted on BlackBerry's blog, an engineer loads Web pages on both tablet computers.

In two test runs, the PlayBook appears to render the page quicker than the iPad.

The tester says the cache and cookies were deleted on both devices and they were both run on the same dedicated Wi-Fi network.

Then there was the easy jab. He loads up a page heavily dependent on Adobe Flash images. Apple's mobile devices famously don't use Flash, which CEO Steve Jobs has described as buggy, insecure and a drain on computer batteries.

The result? A page covered with colorful, animated images on the PlayBook and a mostly white screen on the iPad.

"In addition to Flash, the PlayBook is built to support open Web standards," he said. "So developers have the freedom to choose how best to create great Web experiences."

That's a not-so-subtle shot at the way Apple requires apps for its devices to be approved internally before going on sale in the Apple Store -- a process some developers have complained is arbitrary and hard to predict.

Apple did not resond to an e-mail seeking comment for this story.

Unveiled in September, the PlayBook is scheduled to be released in the United States early next year and elsewhere later in 2011.

It will have a 7-inch touchscreen, compared to the 9.7-inch iPad screen, and have front and back-facing cameras for videoconferencing. It will run on Wi-Fi, with 3G and 4G models to come.

First, the price. RIM has said the PlayBook will be "under $500." But it's unclear how far under, or whether that price includes a data plan. (The iPad starts at $499).

And it's unclear whether the model used in Tuesday's video is a prototype or finished product.

RIM was displaying the PlayBook Tuesday at the Web 2.0 Summit in San Francisco. But it was display-only, so visitors couldn't take it for a spin themselves.

The push for the PlayBook comes as Samsung's Galaxy tablet computer hits the market. The Galaxy, which runs Google's Android operating system, has been described as the most serious competitor yet to the iPad, which has dominated the tablet field since it was released in April.