5 reasons to sign up for 'Call of Duty: Black Ops' 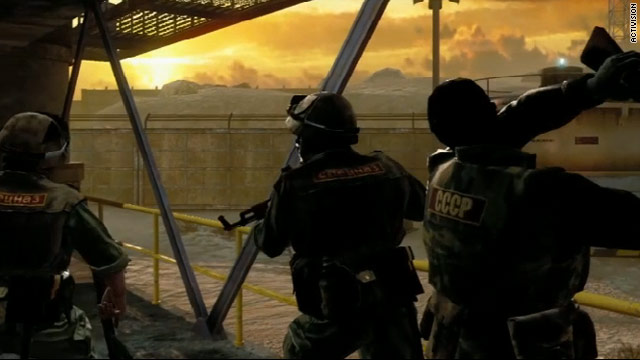 Our reviewer was up late playing "Call of Duty: Black Ops." So far, he likes the game a lot.
STORY HIGHLIGHTS
RELATED TOPICS

(CNN) -- With its eye-popping visuals, compelling Cold War storyline and a seemingly endless array of online battle options, Tuesday's 12:01 a.m. release of "Call of Duty: Black Ops" ushered in a new era in my house.

It's going to mean months of late-night single-player campaigns and multiplayer conquests. Already, at the office after a late night with the game, I'm somewhere between the realm of "incredibly sleep-deprived" and "barely functioning."

My first impressions, after playing for a few hours: This is a visually stunning assault on the senses that will continue to heighten the standard of what great games look like.

Thanks to the teaser trailer shown during Game 6 of the NBA Finals and months of hype in gaming articles, the lid was flying off my excitement for "Black Ops" as I walked into my local GameStop to pre-order my copy two weeks ago.

That's the moment when it gets real. A gamer's anticipation bubbles when you know for sure you'll be playing a game within minutes after it's available to the public.

It was a long two weeks leading up to Monday night. I arrived at my GameStop store promptly at 11:30 p.m. to stand in line with hundreds of other "Call of Duty" faithful and be among the first to get our pre-ordered copies.

There was a generous amount of small talk in the line, largely consisting of many "I can't wait to see..." comments about the game's new features and weapons.

The line snaked almost completely around the small strip mall and was an incredibly diverse mosh-pit of ethnicities, ages and genders.

At the stroke of midnight, a muffled roar rang out -- I couldn't see the store doors open because I was around the corner -- and the next 10 minutes was a satisfying blur. Soon I was headed home to my PlayStation 3 with arguably the most anticipated game release of 2010.

So, for the casual gamer who loves it for the fun (me), the hardcore gamer who lives by the newest releases (me), and who stays up late because he's too psyched to sleep (me), here are five reasons to answer the "Call of Duty":

1. "Black Ops" gameplay is consistent with the excellent "CoD" series

If you've played at least one "CoD" game in recent years, you already know how to maneuver, shoot and navigate your way through these new environments -- among them the snowy mountains of Russia and the jungles of Vietnam.

If you haven't played before, the game's action begins quickly. But the gunplay is paced moderately in the early stages to let you figure things out relatively easily.

2. The Cold War is a refreshing backdrop

The new locales and landscapes are more than refreshing, and I can't wait to see what locales lie in store as I progress through the game.

3. "Call of Duty: Black Ops" is aurally and visually brilliant

This game sets a high standard in graphics and will make your high-definition TV earn its price tag.

A vast array of brilliant colors adorn the action, and you'll be impressed with all there is to see and hear. No detail has been overlooked in the production -- not even the "clink" of empty shells hitting the ground beneath your feet as you fire weapons.

The game's experience is incredibly immersive. It feels rich both in quiet cutaways and heart-pounding gunfights.

4. All your friends will be doing it (when they have time)

The online multiplayer community surrounding this game is a subculture numbering in the hundreds of thousands. From the hardcore teen gamers who feverishly complete their homework each afternoon so they can jump into battle to the plumber who can't log on until his kids are asleep, the online competition is fiery and fierce.

Look to your left and your right. They indeed walk among us.

5. It has a first-rate cast rivaling Hollywood blockbusters

To me, Treyarch's work looks like a masterpiece. Early signs point to the dawn of a new era in video gaming, as well as many more sleepless nights in front of my TV as I begin my quest to master this game.

Good luck to the rookies. To the old pros and my old foes, I'll see you online later tonight.