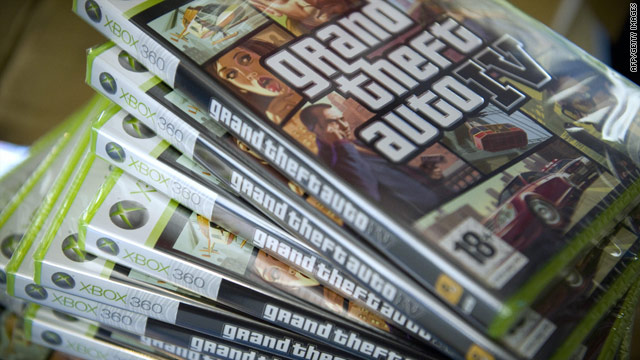 The Supreme Court is hearing arguments over a California law that aimed to ban the sale of violent video games to minors.
STORY HIGHLIGHTS
RELATED TOPICS

(CNN) -- The U.S. Supreme Court on Tuesday is hearing a case about violent video games and their potential impact on young people.

Sound familiar? This debate has been raging in the United States for more than a decade.

So what issues are at stake in this case? What evidence is there to support the argument that shoot-'em-up video games encourage kids to be violent or become desensitized to violence?

And what's the trend with labeling violent games -- and does it work?

Here's a brief summary of what you need to know in order to understand these issues. We're sure to hear more on this soon.

1. What's up with the current Supreme Court case?

The justices are hearing arguments about a California law that would prohibit retailers from selling violent video games to people younger than 18.

2. What defines a 'violent video game'?

The California law said the games have to be pretty darn violent to qualify for the ban. Options given to players must include "killing, maiming, dismembering, or sexually assaulting an image of a human being."

3. Who gets to decide if a game qualifies as that violent?

That's a big question for the court. Video game makers are framing the argument as a battle over free speech: How do you determine which video games are protected forms of art and which are patently violent and offensive?

A tricky case might be a violent game about World War II, for example. (Hat tip to NPR for that).

4. Did the California law ever go into effect?

No. The video game industry sued to get the law declared unconstitutional before it was ever enforced in California.

In 2005, he signed the California ban on violent video game sales to minors.

6. Did everyone forget Schwarzenegger was "The Terminator"?

Maybe! But this brings up an important point. California argues these games are different from violent movies because they involve the players in the acts of violence.

So, the argument goes, watching your current governor shoot people in a movie is fundamentally different from manipulating his movements with a game controller -- pushing the "B" button to make him end a virtual life, for instance.

Psychologists have been arguing about this for a while.

A "friend of the court" brief filed by those who authored and have supported California's ban lists 130 case studies on the subject and concludes:

"These data continually and strongly suggest that participating in the playing of violent video games by children increases aggressive thought and behavior; increases antisocial behavior and delinquency; engenders poor school performance; and desensitizes the game player to violence."

Others disagree. The 9th U.S. Circuit Court of Appeals overturned the California ban on violent game sales to minors in part because it thought there was no proven link between violent video games and real-world violence.

Furthermore, violence is part of the human condition, that court wrote:

"Violence has always been and remains a central interest of humankind and a recurrent, even obsessive theme of culture both high and low. It engages the interest of children from an early age, as anyone familiar with the classic fairy tales collected by Grimm, Andersen, and Perrault is aware. To shield children right up to the age of 18 from exposure to violent descriptions and images would not only be quixotic, but deforming; it would leave them unequipped to cope with the world as we know it."

8. Do video games offer any benefits for kids?

Sure. Some games are used in schools because they're thought to capture the attention of young people in ways other media can't. Other games aim to promote social change and public awareness.

9. How easy is it for kids to get violent video games these days?

Not that easy. A 2009 report from the U.S. Federal Trade Commission found only 20 percent of minors were able to purchase M-rated (violent or explicit) video games without the help of an adult.

By comparison, 28 percent of kids were able to purchase R-rated movie tickets without help and 54 percent of them were able to rent such movies, according to the undercover test, which was conducted in 1,250 movie theaters and shops.

10. What's the most violent video game on the market?

"Postal 2," according to a 2009 list of the 10 most violent video games published by AskMen.com. That site calls the game "the epitome of senseless, over-the-top video game violence."

A similar 2009 ranking from PC World puts "Dead Space" among the most violent games. In justifying that ranking, the site says: "Let's put it this way: In order to successfully kill creatures, you must dismember them. As in, lop off their arms and legs with lasers."