'God of War: Ghost of Sparta' fills in the blanks 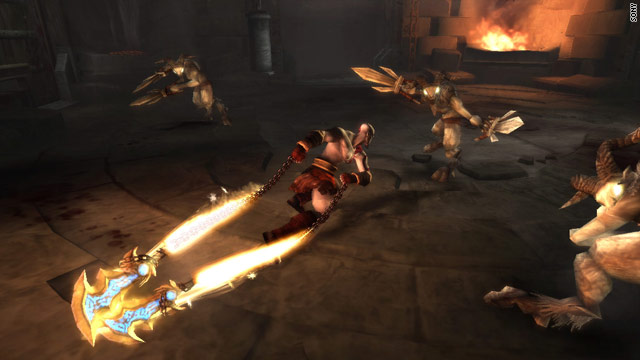 Hero Kratos takes on minotaurs, a cyclops and other creatures in "God of War: Ghost of Sparta" for the Sony PSP.
STORY HIGHLIGHTS
RELATED TOPICS

(CNN) -- "God of War: Ghost of Sparta" tells a gripping tale of hero Kratos' past in front of a beautiful and majestic background that looks like it belongs on the big screen, but plays superbly on PSP.

This exclusive title for the Sony handheld console was developed by Ready At Dawn, the same team that worked on the other "God of War" episode for the PSP, "God of War: Chains of Olympus."

"Ghost of Sparta" falls between "God of War" and "God of War II" in the mythos timeline.

Game designer Mike Deneen said the story is designed to be a deeply personal one for their lead character.

"It is about his journey from mortal to god after killing Ares," Deneen said. "Players will start to understand his anger at the gods."

Haunted by visions and nightmares of his family, Kratos sets off on a quest to rid himself of the horrors.

He is propelled through scenes of fire and ice, water and air -- all done with the idea of making the game bigger and better than the first PSP title.

"We had to make sure there was something awesome to look at," Deneen said. "Always."

Players are also treated to levels showing Kratos as a boy.

"We feel we pushed the PSP to its limits," he said. "We actually filled up the UMD (Universal Media Disc). We looked at locations where we haven't visited before and wanted to visit them."

The PSP screen is constantly filled with vibrant and expansive scenery, from the watery lands of Atlantis to the depths of fiery volcanoes with lava that almost seems alive.

The scene gets frantic once the enemies appear. Cyclops, minotaurs and medusa all return to pester Kratos through the levels. But it's the boss battles where the game really shines.

Huge mythological creatures dwarf the new "God of War" and it takes combinations of might and magic to defeat them.

"We have twice the enemy count as before," Deneen said. "The bosses are 10 times as big and the AI (artificial intelligence) is smarter."

Kratos gets a shield and spear to use in addition to his trademark Blades of Athena, but there is very little new in combat abilities. New magical skills like electricity, fire, ice and soul-eating round out his offensive skills.

"We wanted to bring the old fans back with having new additions to his combat," Deneen said. "First and foremost, this is a 'God of War' game."

While all the bloodshed does make it feel like a typical "GoW" game, there are personal moments that show Kratos' humanity. It is a change of pace that is absent in other games in the series.

Gameplay should last 7-10 hours, which translates to about a week of in-game time.

There are actual night and day scenes, although Kratos never sleeps or eats (he is a god now, after all). Overall, if you've ever played a "GoW" game, this will be a welcome addition to your collection.

The story fills in some of the blanks about Kratos' past and answers questions that were left dangling after "God of War III."

The new abilities and expansive scenery are enjoyable to explore. The new monsters will challenge even the most experienced player and the scenes will make you wish you were playing it on the big screen with a PlayStation 3.

If you are new to the franchise, go play "God of War" (or "Chains of Olympus") first then pick this up before getting "God of War II."

The story will make more sense and the action will be just as entertaining.

"God of War: Ghost of Sparta" will be available on November 2 for the Sony PSP and PSPgo. It is rated M for Mature (Blood and Gore; Intense Violence; Nudity; Sexual Content).