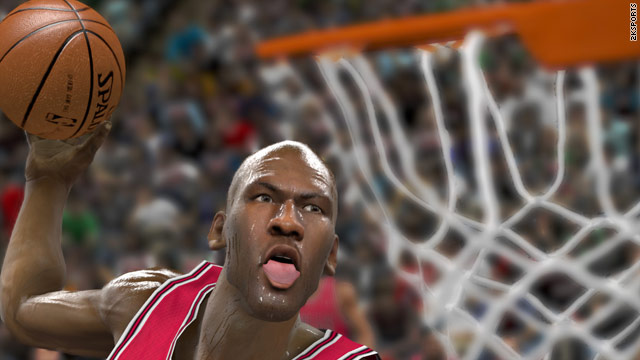 (CNN) -- Standing in the tunnel at Chicago Stadium, Michael Jordan looks back and asks, "Are you ready?"

With those three words, "NBA2K11" kicks off a frenzy of basketball action, awesome graphics and new modes of play that bring "His Airness" to life.

And, yes. That's his real voice.

"My kids were always asking me, 'Why are you not in the video games?' and I never really gave it a thought until now," Jordan said in a telephone interview. "In essence, it gave me an opportunity to be exposed to a generation that I'm probably more recognizable in terms of the 'Space Jam' (1996 live action/animation movie with Bugs Bunny) as opposed to me playing."

Visual Concepts and 2KSports have put together the most realistic looking and feeling basketball game yet in their series. After 12 years, the development teams have made the most of new technology to give players more control, options and realism.

Can you best Jordan?

The biggest addition to the game is the inclusion of Jordan, who has never before been involved in helping create a game using his image, and what's called the Jordan Challenge.

This new mode of play lets gamers try to match, or beat, 10 great moments in Jordan's career -- from a playoff game against the Boston Celtics in 1986 where he dropped 63 points to his Bulls finale in the 1998 Finals against the Utah Jazz.

Each challenge sets the Jordan standard for that particular game then asks the player to beat it.

Can you score 55 points with a 55 percent field goal percentage against the Knicks? Can you outscore Dominique Wilkins in a playoff game against the Hawks?

Jordan, who had final approval on the challenge games, said game designers picked the right moments to highlight.

"The hardest one to be obtained, I think, is probably the flu game," he said, referring to Game 5 of the 1997 Finals against the Jazz, when Jordan woke up with an apparent stomach virus and was told there was no chance he would play.

"Actually, it was the hardest game for me to play looking back now and trying to understand what I had to deal with going through the game. The easiest is probably the Celtics -- the 63-point game."

Each challenge is also given the full graphical treatment as well, with the inclusion of all the players and coaches from that era as well as recreating the actual arenas where the games were played.

"We wanted to show our younger audience what Michael brought to the game of basketball," said Jeff Thomas, vice president of sports development at Visual Concepts. "(The look) is very specific to that game and era. We took it under our wing from start to end."

Complete all 10 Jordan Challenges and a special rookie Jordan will unlock in the game's regular-play mode, letting gamers guide a young M.J. through his career and into the history books.

It's a unique element that video game players have never had the opportunity to experience before now.

Talking about a new generation

It was connecting with a new generation of basketball fans, Jordan said, that persuaded him to say yes to working on a video game for the first time when "NBA2K11" came calling.

"That became a great opportunity for me," he said. "And that's how I felt this game could connect the dots (between 'Space Jam' and his basketball career)."

New dribbling and shot controls show off ankle-breaking crossover moves before the player drops a soft touch, teardrop lay-up that looks like a real game.

NBA players bring their real-world signature moves and reactions to the game to add to the excitement. The movements and actions are nearly 1-to-1 with the controls, but don't expect to juke and slam every time down the court.

Opponent AI (artificial intelligence) is also tougher and more challenging than in previous versions of the game.

Thomas said console hardware advancements are getting close to matching game creators' vision of how the game should look and feel.

"We are always looking for new ways to push the hardware," Thomas said."We are very proud that we are able to include so much in this game."

The game is also Move compatible for the PlayStation 3 version. Players will be able to simulate real basketball moves to shoot, pass and even dunk.

Once you combine those looks and actions with commentary tailored specifically for players, arenas and game situations, and "NBA2K11" could be mistaken for a broadcast of a live game.

The "My Player" mode lets gamers experience all that an NBA career can offer.

From attending the NBA Draft Combine to news conferences and even landing sponsor endorsements, players shape how they want their ballplayer's career to evolve and succeed.

"Association mode" puts you in charge of a franchise and finds out if you have what it takes to build a dynasty. Draft day trades are new this year and an improved AI system gives dealing with other teams a more realistic feel.

"NBA2K11" is also connected to the real-world action through NBA Today 2.0.

In addition to real NBA news, it provides scores and stats from actual games, complete with in-game commentary about those highlights.

If Washington rookie John Wall really hits a triple double in a Wizards game against the Warriors, the announcers in your Lakers vs. Celtics video game will likely talk about it.

Some players don't look quite as realistic as others. And the defensive AI almost has an innate ability to steal passes that, by all rights, they shouldn't be able to touch.

It can get frustrating if you are the type of player who likes a run-and-gun style of offense.

But regardless of all the advancements and refinements in this year's game, the real draw for players will be their first opportunity to explore the career of Air Jordan.

Games can also be played using some of Jordan's Chicago Bulls teams and pit them against teams from this season.

How would the 1995-96 Bulls, who won 72 games, do against this year's Big Three of LeBron James, Dwyane Wade and Chris Bosh of the Miami Heat?

Playing by today's rules and looking at his stats, Jordan said there's no comparison.

"I played a much more physical game, and the stats honestly speak for themselves," he said. "If I played based on the rules the game is being played now, two things would happen.

"I probably would have fouled out because of my physical play on the defensive end, or I'd be at the free throw line each and every time down the court."

He said some of today's players might be able to match his play.

"I imagine in today's game, players could probably equal some of those stats in different circumstances, but the stats are the stats. That's what most people look at and try to make the comparison," he said.

Now, we can find out if Air Jordan can fly higher than the King.