Nintendo 3DS to be released in U.S. in March 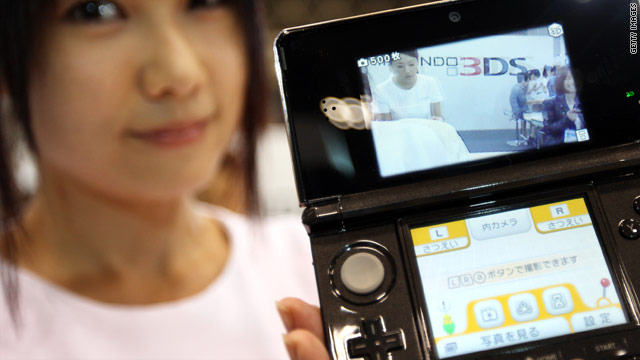 The Nintendo 3DS will be released in Japan in February and the United States and Europe in March, the company said.
STORY HIGHLIGHTS
RELATED TOPICS

(CNN) -- The Nintendo 3DS has a release date, and it won't be in time for the holidays.

It will sell for the equivalent of about $300.

Iwata said the portable gaming console, which gaming writers honored among the best at this June's Electronic Entertainment Expo in Los Angeles, California, will be released in the United States and Europe in March.

The 3DS, which was unveiled at E3, lets the user play games, including updates to the "Legend of Zelda" and "Mario Kart" series, in 3-D without using special glasses.

The model Iwata displayed Wednesday looked slightly different from the one demoed at E3 in June.

He highlighted several new features. Players will be able to use the hand-held console as a camera, take pictures of themselves and automatically convert their images into Miis -- personalized in-game avatars like ones from Wii console games.

The 3DS will allow multi-tasking and have a Wi-Fi connection that will allow it to download updates and new software, even while it's "asleep."

The Wi-Fi also will enable a "tag" mode that will let gamers share information from one console to another without needing to physically link the devices.

Nintendo had not announced a release date for the 3DS at the E3 expo. But many observers expected the company to follow the path of most major gaming releases and hit the market in time for the holiday shopping season.

Most gaming reviewers who have spent time with the Nintendo 3DS have given it high marks. Because hand-held 3-D is new, Nintendo is hoping that those reports will convince gamers

that the new experience will be significantly different from what's already available on portable gaming devices.