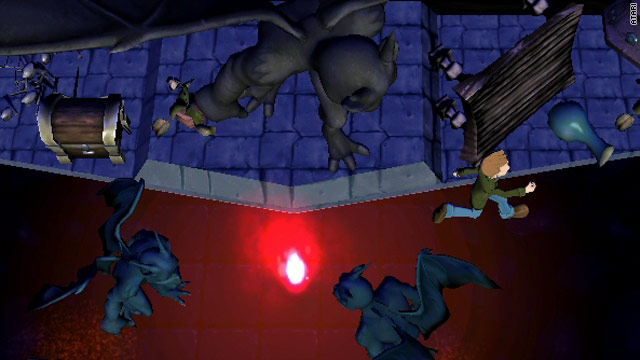 Atari's "Haunted House" is a far cry from the simple graphics of 1981 but seeks a similar feel.
STORY HIGHLIGHTS
RELATED TOPICS

(CNN) -- Atari is hoping that taking an iconic 30-year-old title and adding up-to-date graphics and new enemies while retaining the classic feel and playability will produce a game for parents and kids alike.

"Haunted House," a game released in 1981 for the Atari 2600 console, makes its spooky return just in time for Halloween season.

The game returns players to the Graves Mansion as the grandchildren of the original character, Samuel Silverspring, who search for the lost pieces of a magical urn.

"When the game was originally released in '81, it was the original survival horror, thriller game," Lesterlin said. "We wanted to bring back the nostalgia and make a game that parents can play with the kids."

The development team went to work, expanding on levels and monsters while keeping the feel of the game true to the original. Retaining the pair of glowing eyes that represents the player in the first game was a big priority.

"There was a lot of back and forth in the design process," Lesterlin explained. "How do we want to show the character? In the end, we decided to keep the iconic floating eyes because it gave us a good tie-in to the old game."

Although there was discussion about using a third-person viewpoint or even first-person (over the shoulder) view, designers went with a top-down viewpoint, which also offered opportunities for interesting map puzzles.

There are new enemies as well as old ones in "Haunted House." Ghosts, rats and bats inhabit the early levels, and gamers will battle wraiths, skeletons, gargoyles and the ghost of house owner Zachary Graves in the later, more challenging levels.

"We provided various levels of difficulties so parents could play with their kids and not get anyone frustrated," Lesterlin said. "I remember the old 'Haunted House,' and by the time you got to the end, it was pretty challenging."

Lesterlin said the team also looked at the older game and tried to figure out what an early-'80s gamer would have wanted to do, then figure out a way to do it with today's technology.

In the original, the main character couldn't fight opponents. He was just forced to run away. So, designers came up with a way to fight back.

"We wanted to fight ghosts, so we had to come up with tools to be able to do that," Lesterlin said.

Torches are the game's earliest weapon, and handy for fighting bats, while others, mainly more advanced light sources, come later.

The rooms of the haunted mansion remain mostly dark, when the character's floating eyes are all that can be seen. Players can find matches, candles, cell phones and other light-emitting devices to light their way for a short period of time (as well as being used as weapons).

Sound is used to evoke an ominous atmosphere, with creaking doors, squeaking floor panels and the occasional peal of laughter from out of nowhere.

"The storm outside gets louder as you progress through the game. The house has become twisted with evil and creaks everywhere," Lesterlin said. "You hear the sounds of a kid laughing through the wall, which ties into the back story of the game."

The original game came with small comic books to explain what went horribly wrong at Graves Mansion. Lesterlin said journal pages from Graves, his wife and Grandpa Silverspring are scattered throughout the levels to reveal the back story from each person's point of view.

"The journals reveal how Zachary Graves went insane after the death of his son. His wife describes how she watched him deteriorate," he said. "It really tells the entire story about how this place went wrong."

New players will get an arcade-style game that is easy to play but challenging as they progress. Older players will find a game that feels nostalgic but still exciting, with new twists and turns.

If it achieves both goals, Lesterlin said, it will be mission accomplished for the design team.

"This title needed to hold true to its roots because it was the foundation to the horror-thriller games of today," he said. "We want to keep this as an arcade title for younger players but want older players to think, 'That's the old game. That's the game I remember and love.' "

"Haunted House" is available for the Wii and PC now and will be available on the Xbox Live Arcade in October. It is rated E10+ for language, mild blood and mild cartoon violence.