A look at the living room of the future? 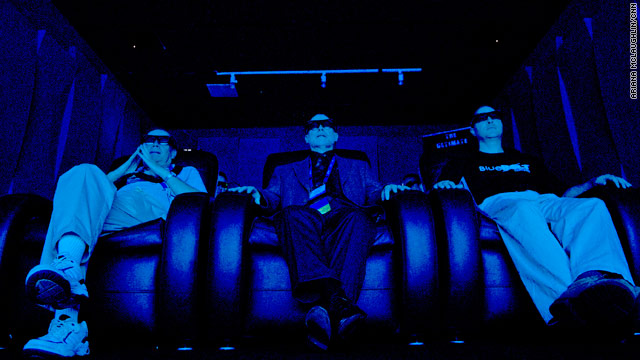 CEDIA trade show attendees try out chairs that can shake and vibrate in sync with TV programming.
STORY HIGHLIGHTS

(CNN) -- Assuming that consumers someday will be really rich, a recent tech conference in Atlanta, Georgia, presented an interesting vision of what our living rooms might look like in the future.

TV screens will be measured in yards, music will be ear-bustingly loud (but will still sound good) and chairs will shake to the tune of both.

Oh, and there will be fewer cords to trip on.

The downside: All this will cost you thousands, maybe even hundreds of thousands, of dollars on the current market.

Here's a look at a few of the interesting -- and, given the state of the global economy, perhaps out-of-touch -- living room technologies presented at the Custom Electronic Design & Installation Association's annual Expo.

What do you think of this luxurious vision of the future? Let us know in the comments section or send us a note on the @cnntech Twitter account.

A TV that's 4 yards across 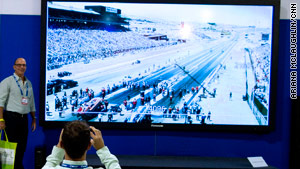 Panasonic will begin selling a 152-inch TV in January.

In January, Panasonic will debut the world's largest plasma TV, which is 152 inches when measured diagonally.

The price? A whopping $500,000. Yes, as in half a million dollars for a television (not a house, say, or a small island or something).

Eric Adams, a company sales engineer, said Panasonic has found some clients who are interested in the enormous TV. But delivery isn't easy. The TV is too wide to fit in elevators, even most commercial elevators. So, in at least one case, the company will have to cut a hole in the side of a building and lift the television into the 13th floor.

"We laugh and tell everybody it ships with a chainsaw," Adams said.

Chairs that shake with the music

If 3-D displays are designed to make images jump out at your face, then tilting, shaking and vibrating chairs seem poised to toss viewers right back into those pictures. A company called D-BOX Technologies is promoting machinery that can be added to chairs or planted beneath couches to make them wiggle and shimmy during movies.

David Amato, a sales engineer at D-BOX, said the company's efforts to add a fourth dimension -- motion -- to home entertainment are not intended to make watching a film feel "like a theme park ride."

The chair motions, which are often subtle, add an artfulness to the experience, he said. The goal is to put the viewer in the film. It also sounds like a high-tech updating of Sensurround, a gimmicky theater audio system in the 1970s that was supposed to make moviegoers feel rumblings during disaster epics such as "Earthquake."

The systems are expensive, though, running from $7,500 for a chair upgrade to $8,000 for a couch. Neither of those prices includes the actual furniture. And you can only feel the vibrations of movies that D-BOX has hand-coded.

Workers spend about 20 hours per movie going through frame by frame and choosing the right vibrations and sensations that will enhance each scene, he said. So far, they have added this "motion coding" to at least 1,000 films, he said.

Let's say you do go all-in with this over-the-top vision of the future living room. The last thing you want to do after hanging a $500,000 TV on the wall is trip over its cord and send your life's biggest investment toppling onto your worn carpet.

Luckily, several companies at the CEDIA Expo showed off technologies to reduce the number of cords in your living room.

A host of companies are already selling home servers with Ethernet connections, so you can store all your data in one place, accessing it wirelessly from your TV, laptop or, if configured correctly, anywhere in the world.

Speakers that know your room

In the not-so-far-off future, speakers will get better at knowing what our rooms look and sound like and they'll be able to boost performance to fit those conditions.

Steve Colburn, product developer at Triad Speakers, said the best speakers in the world would sound great if they were installed in a giant meadow; but put them in a boxed-in living room and they're likely to sound pretty terrible. The noises just bounce around, talking over each other and creating a mess.

The solution? Speakers hooked up with microphones, so they can listen as well as project. When the speakers aren't deaf to the clatter they're creating, they can adjust to create sound that's fit for a specific room and nowhere else.

Again, however, the high-end version of this will cost you. A demo at the CEDIA Expo featured Triad speakers that cost $17,000. This technology is on the market now and is improving all the time -- but it isn't yet the norm, Colburn said.

The speakers delivered a sound that was slap-you-in-the-face loud. Surprisingly, though, it wasn't harsh on the eardrums.