Review: How Move is better than the Wii 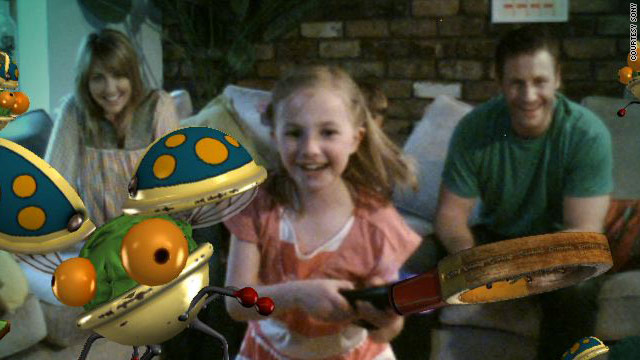 Start the Party, a game for Sony Move, involves players in the game in a way the Nintendo Wii doesn't, the author says.
STORY HIGHLIGHTS
RELATED TOPICS

(CNN) -- It's official: Sony Computer Entertainment has launched its much-hyped Move controller for the Sony PlayStation 3, a motion-sensing peripheral that lets you interact with games by waving the device in front of the television.

What's that, you say? This sounds familiar? Well, yes, if images of the Nintendo Wii are conjured up, that's to be expected. But did you know Sony offered motion-sensing gaming long before Nintendo? In fact, it was back in 2003 -- with the EyeToy peripheral on the PlayStation 2 console.

Designed to work with specific games, the new PlayStation Move motion controller -- which sells for $49.99 -- requires a PlayStation Eye camera, which sits just below or above the television. The camera adds an extra expense of $39.99, or $99.99 when the camera is bundled with the controller and the Sports Champions game.

The Move controller resembles a microphone. It has a small ball on top that changes color depending on what's happening in the game.

So how is the PlayStation Move motion controller any better than the Nintendo Wii? And is it worth the investment?

First, the controls are more accurate. The Move picks up motion more precisely than the Wii, and it tracks motion in a 3-D space -- so if you step back while playing a ping pong game, the game makes your character step back from a virtual ping pong table.

Second, the Move puts you in the game to a greater degree than the Wii. Because it's a camera-based system, many games on the Move can put you in the game. For example, you can see yourself on the screen in Start the Party and EyePet.

Truly, the motion-tracking technology works very well. Setup is a breeze, requiring you to download a small system update and then connect the camera to an available USB port on the PS3. Start a game and you're asked to calibrate the controller, which takes about 15 seconds, and then you're ready for action. The Move controller and secondary navigation controller for your left hand ($29.99), required in some games, are lightweight and comfortable to hold.

Real-time movements are accurately mirrored in the game, whether you're using a virtual paintbrush on the screen, hacking and slashing a sword or shooting an arrow at a faraway target.

But while there are a few PlayStation Move titles at launch, none of them are "must have" games, save, perhaps, for Sports Champions ($39.99), which you get in the aforementioned bundle. This collection of minigames includes beach volleyball, table tennis, archery, bocce, disc golf and gladiator duel. EyePet is a great game for younger kids, as it's an augmented reality experience that puts a virtual pet in your family room. Kids will see themselves on the screen interacting with the cute fur ball in a number of ways. Start the Party loses its steam after you play through the 20-odd party games once or twice, and the weakest of the bunch, Kung Fu Rider, isn't worth your time or money.

That said, Sony, and many third-party publishers -- including EA Sports, Ubisoft and Capcom -- have committed to many more Move-enabled games. The technology is there, but you might have to wait for the games to catch up.

In short, PS3 owners with Wii envy can now get aboard the motion-sensing bandwagon with pride, but don't be too optimistic about the first-generation game offerings.

The opinions expressed in this commentary are solely those of Marc Saltzman.