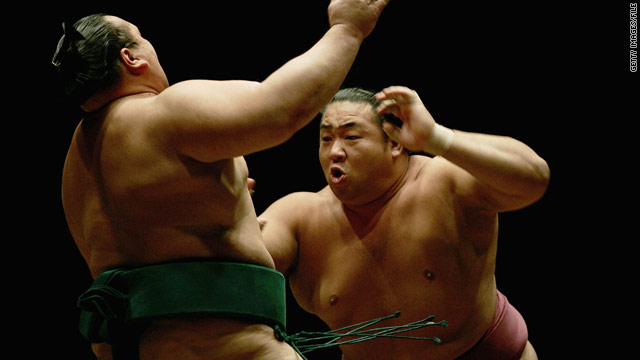 Sumo wrestlers' fingers may be too big for smaller phones, so Japan's sumo association has handed out iPads.
STORY HIGHLIGHTS
RELATED TOPICS

If you're a sumo wrestler, maybe so.

The Japan Sumo Association reportedly has purchased 60 iPads for some sumo wrestlers whose fingers are too beefy to use mobile phones.

According to a report from Jiji News, a Japanese news service, the sumo association hopes the iPad will improve its communication with wrestlers who don't use computers or who struggle with tiny gadgets.

"We will hand out the newest iPads to all the sumo stables to swiftly communicate what we need to," Hiroyoshi Murayama, an official with the sumo association, told the Reuters news agency.

The iPad, a touch-screen "slate" computer from Apple Inc., features a 9.7-inch screen, considerably larger than those of most phones. Smartphone screens tend to range from about 3 to 5 inches, measured diagonally.

The iPad can be purchased with a 3G connection, but it's not a phone. It is generally billed as a device for browsing the Web, reading and watching video.

Some older people and those with dexterity issues also have reported that using an iPad is easier than smaller devices or computers with keyboards.

To fans of "The Simpsons," this storyline may also sound vaguely familiar.

In one episode, the character Homer grows so fat that his sausage-shaped fingers are too big to punch the keys on his phone.

As he's struggling with this, he gets an automated message: "The fingers you have used to dial are too fat. To obtain a special dialing wand, please mash the keypad with your palm now."

Although the issue may seem comical, large-fingered phone users say this is a real problem, especially as more smartphones employ touch screens.

"I always seem to end up pressing the wrong key even when I'm sure I've got my finger mainly over the one I want. I usually get the one on the right but if I try to hit the key more to the left I just get the key to the left instead," an iPhone owner wrote on a comment board at the blog AppleInsider.

"I've tried tapping the screen with a pen or the end of my nail but it doesn't seem to work -- only actual skin contact will register."

That user wrote that weight isn't necessarily the issue.

"Okay I admit I'm a big guy and I could stand to lose a few pounds," he wrote. "But I also have naturally big hands and fingers and I don't think even if I lost weight my fingers are going to get significantly smaller!"

Big tech companies have acknowledged this, too.

According to the New York Times' Bits Blog, Microsoft has a name for the fact that some gadgets are too small for big people: "the fat finger problem."

The company is working on a "Nanotouch" screen that would let big-fingered people control touch-sensitive screens from behind, so their bulky digits don't get in the way of whatever is being displayed on the screen.