The importance of video game history 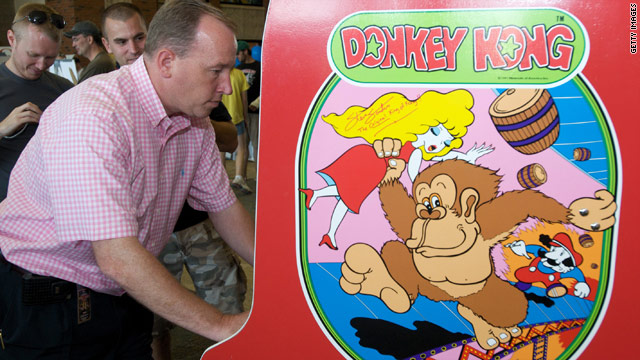 Steve Sanders, "The Original King of Kong," plays at a launch party for the International Video Game Hall of Fame and Museum.
STORY HIGHLIGHTS
RELATED TOPICS

(CNN) -- Music has the Rock and Roll Hall of Fame. Visual arts have the Met, Louvre and Guggenheim. Radio and TV have the Museum of Broadcast Communications.

So why are decades of priceless video game history relegated solely to "abandonware" sites, where old and discontinued titles are saved from oblivion only through the dubiously legal efforts of diehard fans?

"The game industry is a fast-moving business. ... Unfortunately, as a result, it's often so busy moving forward that it doesn't do enough to preserve its past," said Jon-Paul Dyson, director of the International Center for the History of Electronic Games.

David Crane, creator of cult classics like "Pitfall" and "A Boy and His Blob," agrees.

"The game business is very much driven by the latest hit games," he said. "Once a game is a few months old, it's considered dated, and not exciting to video game buyers. It's just the nature of a hit-driven business."

From "Pac-Man" to "Donkey Kong," more than 250 vintage coin-operated machines are also on display at Laconia, New Hampshire's, American Classic Arcade Museum, which is at the world-famous Funspot arcade.

And now, video games are headed to the Smithsonian.

It claims to be "the first to examine comprehensively the evolution of games as an artistic medium."

"Get Lamp," a documentary about classic text adventures, further debuted earlier this month, offering fans an unprecedented glimpse at the history and culture surrounding the field's earliest smash hits.

But for a pop culture medium that's touched tens of millions of lives, and profoundly influenced multiple generations since first storming bars and living rooms in the early '70s, it's hardly a sweeping homage. Insiders say misperceptions of the craft may be to blame.

"We're no different than other art forms in their infancies," suggests Bob Bates, founder of Legend Entertainment, whose output ranged from early text adventures like "Spellcasting 101" to first-person shooter "Unreal II: The Awakening."

"Classic TV shows got taped over to save a few bucks. Movie prints deteriorated in vaults and no one cared for a long time," he said. "If we survive as an art form, at some point someone is going to look back at the early days and say, 'Why didn't anyone preserve all that material?' "

Some blame the general public's reluctance to view the medium as a genuine art form and the subsequent dismissal of surrounding artifacts -- from boxes to manuals and prototype cartridges -- as "worthless junk."

Others cite the hit-driven industry's constant boom-and-bust cycle, which often results in corporate acquisitions that retain company names, but fail to preserve decades of history and supporting relics.

More distressing than the casual obliteration of countless priceless pop culture artifacts, argues "Leisure Suit Larry" creator Al Lowe, though, is what it ultimately costs the industry and fans as a whole.

"Someday, we'll realize that we've let our heritage dissipate ..." he says. "History is important, so that younger generations can learn from it."

As a result, according to gaming experts, even the oldest, seemingly most incongruous titles' legacies can still be felt today.

"Thousands from foreign countries have told me that they learned English because of our games," Lowe said. "Many more tell me that their choice of careers was influenced because they learned computer skills and problem-solving through our games and then became computer professionals."

"People tell me about the many hours spent playing, how these titles entertained them through college or inspired them to get into the gaming business," seconds Brian Fargo, founder of Interplay and inXile Entertainment. "It's like my own fond memories of old shows like 'H.R. Pufnstuf' or 'Speed Racer.' ... they live on in our creative conscious."

Still, the irony for those like Fargo is telling.

While the effects of classic games are still being felt, most modern players would be hard-pressed to remember last year's hits, let alone historical gems such as "Ultima," "Pool of Radiance" or "Wizardry," or publishers like Broderbund or SSI.

"The industry moves at light speed," he confesses, "and newer generations just haven't heard of many of these titles."

But despite the narrow-mindedness of critics who disparage the medium and downplay its cultural relevance, says Electronic Arts and Digital Chocolate founder Trip Hawkins, it's worth fighting harder to preserve its history going forward.

"Many early games introduced fundamental new technologies, inventions and themes and did crucial pioneering work that laid the foundation [for today's hits]," he explains. "Older titles will be remembered for their craftsmanship and timeless elegance.

"We had very little technology to work with ... fundamental play mechanics had to be simple, engaging and addictive. Some of them have not been improved upon yet."