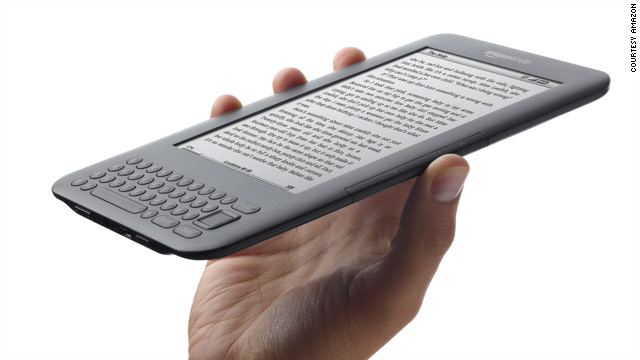 The new Amazon Kindle, which goes on sale in August, starts at $139.
STORY HIGHLIGHTS
RELATED TOPICS

Just three years ago, an e-book reader would cost you $400.

And this summer, the new Wi-Fi-only Kindle e-reader from Amazon will go on sale for $139, which seems affordable in comparison.

But are we fooling ourselves in thinking $139 is cheap?

Maybe not. It's widely held in consumer electronics circles that $100 is the holy grail of all price points, that "magic" spot, as Wired's Gadget Lab put it, where people start to make purchases out of impulse rather than careful calculation.

E-readers are inching toward that point. Forrester analyst James McQuivey writes on his blog that some e-readers may hit the $99 mark by the holiday season this year.

In five years, he says, only the very-high-end models will cost that much, with lower-end e-book readers going on shelves for just $49. (By comparison, Apple's iPad, which some use as an e-reader, currently starts at $499.)

A 2009 survey from Forrester shows what many bloggers already believe to be true: Many more people would buy e-readers if they cost less than $100.

"To reach the largest market possible, the prices will need to come way down," an official blog post about the report says.

Way down -- meaning to the price levels e-readers are approaching in 2010.

Others say it's best to wait to make a big electronics purchase even if it seems cheap, compared with previously set prices.

The blog No Credit Needed recommends a "cooling off period" before buying gadgets.

"For every $100 that I want to spend on the purchase of a new product, I must wait one day before I make the purchase. This creates a self-imposed 'cooling-off' period," that blog says.

There is some consensus that the new $139 Kindle, which goes on sale in August and boasts a better screen, is pretty cheap in relative terms.

CNN Tech posed this question about the Kindle's new price to our Twitter followers: "At $139, would you say the new Kindle is cheap? Is it affordable? Is it an impulse buy?"

"I love this device. The price is stoopid cheap and the one true reader for text. WiFi only is AOK 4 me. Gimme," wrote another.

But not everyone was sold.

One user pointed out that the book prices and availability make a difference, too.

"I bought a Nook. Kindles could not handle as many file types and books were more expensive. Great investment if you read a lot," that user wrote.

Some bloggers say $139 is not quite low enough to be enticing.

"While that's a significant decrease based on the original Kindles tipping the scales at $300 not to long ago, if [Amazon CEO Jeff] Bezos really wanted to shake up the e-Reader market, I believe he needs to take it one step further," writes Ron Callari at InvestorSpot.

Let us know your thoughts in the comments section below.