New versions of 'Pocket God' heading for iPad and beyond 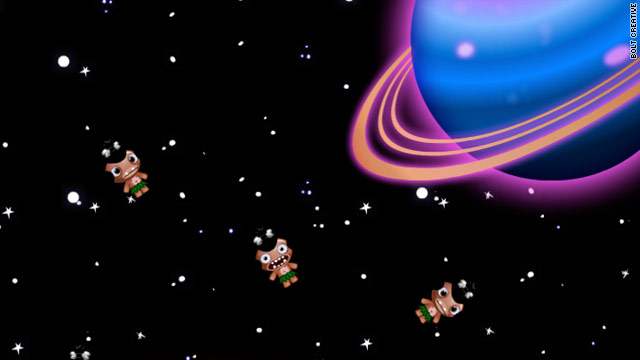 (CNN) -- "Pocket God" started as a sprint, a week's worth of work that was supposed to be practice for Dave Castelnuovo's "real game."

Instead, it became one of the most popular apps for the iPhone, selling millions of copies and spawning an online community that continues to grow as its creators expand into dolls, comic books and, now, a version for the iPad.

It's one part video game, rife with juvenile humor, and one part demented virtual sandbox -- letting players take care of a tribe of digital islanders or, more likely, dunk them in the ocean, toss them into volcanoes and subject them to other darkly humorous torment.

As of last week, the 99-cent app was nearing 3 million sales, along with another 440,000 purchases of in-game "skins" that let players change the look of the game.

"Pocket God" spent about a month this year as the top-selling iPhone app of all time before being outstripped by casual games "Doodle Jump" and "Angry Birds."

Not bad for a project that Castelnuovo and designer Allan Dye finished between Christmas and New Year's Eve 2008.

"We didn't really have high hopes," Castelnuovo said. "We kind of did something to make ourselves laugh. We said, 'Whatever. ... It's kind of a throwaway. We'll work on our real game afterward.' "

This year, they'll look for similar success on the iPad, Apple's slate-style computer heralded largely as an e-reader and gaming platform.

"Pocket God: Journey to Uranus" is expected to be released this fall, Castelnuovo said. The new version of the game will be available only for the iPad.

Castelnuovo, who was a game developer for Sega and other companies before forming his own Bolt Creative, said the iPad version will feature more detailed graphics and an increased focus on mini-games.

"It's a completely new game," he said. "I don't really believe in taking an existing title and cranking out an exact same clone of the game on every different console out there. If we have a really hardcore fan that has it on both iPad and iPhone, we want them to have a different experience."

Scott Steinberg, founder of GameExec magazine and Game Industry TV, said "Pocket God" is at the forefront of the rise of casual video games.

"What we're actually seeing is a casual-game genre, and a platform -- the iPhone -- that you wouldn't typically associate with the so-called god games," Steinberg said.

Steinberg, a freelance gaming blogger for CNN.com, said "Pocket God" harkens to the success of "god games" like "The Sims" -- the best-selling PC game of all time -- and even earlier titles like "Populous" and "Ultimate Domain."

"In some sense, it's just really an offshoot of sandbox play, when you were lining up toy soldiers and castles, then knocking them all down and building them up again," he said.

The creators of "Pocket God" help keep the game relevant with their frequent updates, Steinberg said, adding bite-size adventures that keep players interested until the next update comes along. ("Pocket God" had been updated 32 times as of Monday).

"When it comes to games, sometimes less is more," he said. "It doesn't have to be a months-long, world-spanning epic journey that you need to master 67 keyboard strokes to enjoy. Sometimes, a little instant gratification is what the world wants."

Castelnuovo said "Pocket God" has players of all ages, but the majority are high-school and college age.

He credits the game's success to not worrying too much early on about how it would be received.

"I think a lot of companies, with games in particular, think, 'What is somebody else going to buy?' They start to second-guess that instead of building something that they themselves respond to."

Since "Pocket God" was released, Castelnuovo and Dye have stayed engaged in their player community, largely through the game's official blog. They began making changes based on player feedback.

Early on, they removed some images from the game that Pacific Islander groups said they considered offensive. They briefly stopped calling their island characters "pygmies" but returned to it, Castelnuovo said, after being assured that it wasn't considered an insulting term.

He also credits the game's twisted humor. Updates have frequently had snicker-inducing names like "Shake that App," "Flipping the Bird" and "Great Job, Ice Hole."

Players can subject the pygmies to earthquakes, thunderstorms and shark attacks -- and those are some of the tamer possibilities.

"I think people really respond to the comic characters, the edgy humor," Castelnuovo said. "You see that all over the media today -- whether it's Sarah Silverman or 'South Park.' I guess for the kids' part, 'SpongeBob SquarePants' is kind of edgy.

People want to rebel. They want to be bad, but safely be bad."

A comic book from independent publisher Ape Entertainment and a limited run of plush pygmy dolls are on the way. There's word from the company that a "Pocket God" app for Google's Android system also is in the works.

And, Castelnuovo promises, that's just the "tip of the iceberg" -- an iceberg that, no doubt, will be populated by freezing islanders.