Is 'cloud computing' the future of video games? 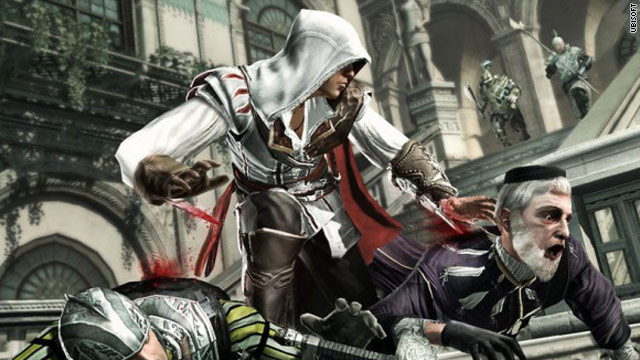 Popular console games such as "Assassin's Creed II" will be available through an online subscription service.
STORY HIGHLIGHTS
RELATED TOPICS

Los Angeles, California (CNN) -- Playing high-profile video games quickly from portable devices such as your iPad might get easier after this week's Electronic Entertainment Expo.

While the E-3 "game changer" tag has been reserved largely for innovations such as 3-D and motion-sensor systems, several companies hope using cloud computing to store games will be the real shift by letting gamers play high-end titles anywhere, on almost any machine.

If fully realized, they say, cloud gaming could be a console killer.

"Today we're taking the first step toward a future where video game content is increasingly free from the restrictions of device and location, while showcasing the ability to instantly play the latest, most advanced games at the touch of a button," said OnLive founder and CEO Steve Perlman.

Cloud gaming uses rapid data compression to let users store their games "in the cloud" -- on Web servers -- and then pull them down and play them using a regular Web browser. It's the same concept as storing photos on a site such as Flickr or music videos on a MySpace page.

The user doesn't actually have those files on any one particular computer but can access them from anywhere.

OnLive has partnerships with gaming companies such as Electronic Arts, UbiSoft and Warner Bros. Interactive and announced several new ones, including Sega, on Tuesday. More titles were expected to be available as they are released.

OnLive's service, which launches Thursday, will offer free subscription for a year. OnLive has not announced what fees will be beyond that, but a spokesperson said Wednesday they will be "much less" than $15 a month.

OnLive isn't the only one in the cloud-gaming business though. Rival Gaikai announced this year it had raised $10 million for a streaming game service that will let users sample games before buying them.

"[W]e host the games, we run them, we worry about hardware and software updates, and we stream them to you," Gaikai said on its website. "The only thing you need is a browser and an internet connection."

Also at E3, Sony announced PlayStation Plus, an online subscription service that expands its PlayStation Network.

Launching on June 29, the pay service will offer gamers a chance to play exclusive and preview versions of top games, ramping up Sony's bid to compete with the Xbox Live network from Microsoft.

And billionaire Sir Richard Branson made the space even more interesting Tuesday with the rollout of Virgin Gaming -- an online home for competitive console gamers.

The subscription site will host top-line games that gamers would typically buy for themselves.

"With Virgin Gaming, we're offering members more than just a place to compete. We're offering them the best, safest and most secure online experience with the fresh, fun approach Virgin is known for," said Rob Segal, CEO of Virgin Gaming.

In his typical, bigger-than-life style, Branson pulled up at E3 in an armored car purportedly carrying $1 million -- representing the total payout for a series of cash prizes Virgin will pay in competitive tournaments hosted on the site.

The cloud-computing concept had insiders talking at E3 -- which started Tuesday and runs through Thursday. But not everyone in the tech community is sold just yet.

Some question whether gamers, who presumably already have at least one gaming console, will pony up again for the ability to play their favorite titles from the cloud.

"Even if it costs less to rent or play a game -- and it probably will ... OnLive will have a tough time competing with actual hardware for all but the most dedicated gamers," Jared Newman wrote on the Technologizer blog.