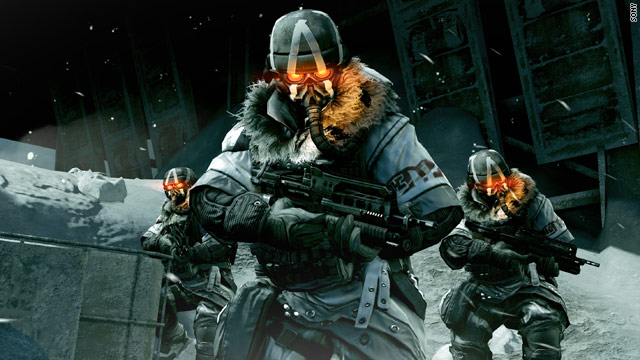 "Killzone 3" is one of many upcoming games that will hit home screens in 3-D.
STORY HIGHLIGHTS
RELATED TOPICS

(CNN) -- When developers and publishers of the world's most popular games get together, expect big announcements, big promises and a few surprises.

Most of the focus on this week's Electronic Entertainment Expo (E3) will be on motion controllers and 3-D news from Microsoft, Sony and Nintendo. But game makers are ready to make their own noise with new titles to play on these enhanced consoles.

Here's a look at some of E3's most anticipated games:

Fan favorites "Gran Turismo 5" and "LittleBigPlanet 2" will be getting upgrades with more realism, better graphics and more sharing between players, Sony says. "SOCOM 4: U.S. Navy SEALs" will allow players to lead a five-person squad on a six-day battle in Asia and will be supported by the new Move motion controller.

"Killzone 3" is ready to bring the realism into your gaming room. The first-person shooter will support full 3-D gameplay. Steven Ter Heide, senior producer of Killzone 3, said gamers will really see the difference.

"3-D really helps to heighten that sensation of being in the middle of this epic war," he said. "The increased sense of immersion makes the environments and enemies almost tangible. It's very much a foreground thing."

Sony also will be showcasing their online role-playing game, "DC Universe Online," and the latest incarnation into the God of War mythos, "God of War: Ghost of Sparta" for the PSP.

"Halo: Reach" was released as a beta in May. More than 2.7 million players played over 17 days, and Microsoft is ready to show the rest of the game during E3. It has already been tapped as the biggest potential seller in 2010 by a survey of game insiders.

Microsoft showcased many exclusive titles at a press conference prior to the opening of E3, including many games that will utilize their new motion-controller, called Kinect. Big names like "Call of Duty: Black Ops," "Gears of War 3," and "Fable 3" will be coming out later this year.

The early Kinect games ("Kinectimals," "Kinect Sports," "Kinect Joy Ride," "Kinect Adventures") are all played without a controller. Because they read full-body movements, many will require gamers to be in pretty good shape to truly enjoy.

Likewise, Nintendo will be announcing games to go with their new 3-D handheld console, Nintendo 3DS. But they aren't neglecting the Wii.

Samus returns in "Metroid: Other M," which is expected to be released in 2010. They are also going to release info on a game that is currently called "Zelda Wii," although that title is expected to change.

Actor Daniel Craig, aka James Bond, also will be featured in a "GoldenEye 007" remake coming out this fall. Featuring eight classic Bond villains, the game will be exclusive to the Wii.

Mario, Donkey Kong and Samus also will be featured in new titles.

UbiSoft is covering the major genres with a first-person shooter, a driving game and a sports game.

The shooter, "Tom Clancy's Ghost Recon," will offer players the ability to become nearly invisible while completing their missions.

"Driver: San Francisco" brings the series to UbiSoft for the first time, staying true to the franchise while offering a high level of grittiness. And Olympic snowboarding medalist Shawn White returns to his roots for the new "Shawn White Skateboarding" game.

UbiSoft president Laurent Detoc said this is a great time to be into gaming.

"3-D gaming will improve our storytelling, immersion and experience for the players," he said. "We think it is going to be enormous."

The company also unveiled a new fitness game to be used with Kinect, a shooting game that isn't played in front of a computer and a video game inspired by the late King of Pop, Michael Jackson.

Starkiller is back to take on Darth Vader in "Star Wars: Force Unleashed II" from LucasArts. The trailers for the game had audience members gasping at Tuesday's Nintendo keynote, and an early demo video shows some new Jedi powers. Then again, it is "Star Wars," which means it will have an instant fan base ready to praise or bury the game.

Electronic Arts will have their latest versions on "Madden NFL 11" and "Tiger Woods PGA Tour 11," which will offer online play for Ryder Cup action. "Bulletstorm" is a new game that will be revealed for the first time at E3 and offers what they call "kill with skill" gameplay. EA is also ready to show off follow-ups to two of their big titles -- "Crysis 2" and "Dead Space 2."

2KGames also will be revealing more details about their work on "Civilization V" and "Mafia II."

Disney Interactive Studios is banking on games with movie tie-ins. "Pirates of the Caribbean: Armada of the Damned," "Tron Evolution" and "Toy Story 3" -- which will be Move compatible -- are going to be featured at E3.

Bethesda will be display their follow-up to the title voted E3's 2008 Game of the Year with "Fallout: New Vegas" (October 19). Imagine all the post-apocalyptic grime and grit, but amp it up and set it in Vegas. And this time, what happens in Vegas doesn't stay there.

Capcom is showing off the latest installment in the VS series with "Marvel vs. Capcom 3: Fate of Two Worlds." And what would a gaming conference be if there wasn't a zombie sighting? "Dead Rising 2" will give players the opportunity to turn everyday objects into weapons to repel massive zombie attacks.

And there are are sure to be some surprises. As one game developer told CNN last week, "We're going to have the biggest entertainment announcement of E3." By the end of the week, we may know who can really lay claim to that title.