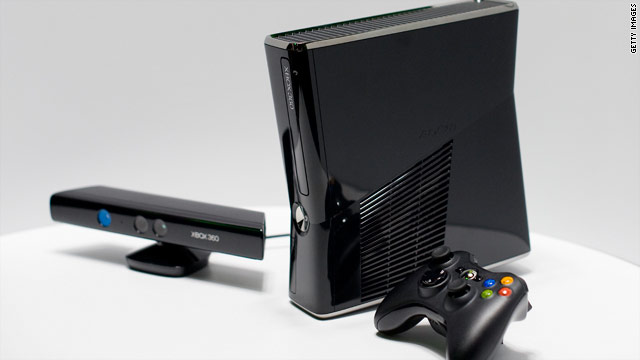 (CNN) -- If Microsoft has its way, we all will be playing video games by moving our bodies instead of holding remotes starting November 4.

That's when Kinect, the company's new motion-controlled video gaming add-on for the Xbox 360, will go on sale in North America. Kinect will hit stores worldwide by the December holidays.

The new system uses cameras to read a player's body movements and then translates those actions onto the TV screen and into the game -- all without the aid of remote controls or buttons.

"With Kinect for Xbox 360, we're making entertainment controller-free, simpler and more social than ever before," Marc Whitten, Microsoft's corporate vice president for Xbox Live, said during a media event in Los Angeles, California. It was also streamed live over the internet.

"It's unlike anything you've ever experienced before," said Don Mattrick, Microsoft's senior vice president for interactive entertainment.

The Redmond, Washington, company also announced a new, smaller version of the Xbox 360. The new version of the popular gaming system will have a Wi-Fi connection and a 250-gigabyte hard drive. It will cost $299, the same amount as previous versions. It is available from retailers beginning this week.

Microsoft did not say how much Kinect will cost. The new Xbox 360 will not be able to read players' motions without the Kinect add-on.

The blog Engadget reported that an online retailer briefly listed prices for Kinect at $150 to $400, depending on the game package. That report has not been confirmed by CNN.

Other video game makers, including Nintendo and Sony, are expected to make announcements at E3 as the week continues. The event's acronym stands for Electronic Entertainment Expo, and it continues through Thursday.

Sony and Nintendo have motion-controlled gaming systems, too. But Sony's forthcoming Move and Nintendo's Wii, which debuted in 2006, require players to hold remotes in their hands.

By contrast, Microsoft Kinect reads a player's body movements without the aid of remotes, using a technology developed by Microsoft Research. Microsoft first showed off this technology at E3 in 2009 but did not reveal many details about the system until Monday. Until this week, Microsoft referred to Kinect under the code name "Project Natal."

Microsoft highlighted six games for the system, which will be available when Kinect launches in November:

-- A fitness gamed called Your Shape lets users track their personal fitness and do workouts with digital trainers. The game features running and aerobics.

-- Dance Central lets players dance for points, without stepping on mats or using controllers. It teaches some real choreography from pop music videos.

-- And a game called Kinectimals lets youngsters play with virtual wild animals from around the world. In a demo of that game, a young girl played with a pet tiger cub named "Skittles," who licked the screen and obeyed her voice commands.

Aside from watching players' movements with cameras, Microsoft Kinect for Xbox 360 also uses a microphone to listen to players' voices.

In demonstrations, Microsoft employees showed how Kinect can be used for video chats as well as to listen to music and watch movies with friends in other locations. The command "play movie," for example, makes the system start playing the film a user has selected.

"Imagine a world where you can watch a movie without a remote, play a game without a controller, all in the comfort of your living room," Whitten said.

To log into the system, players just wave their hands in front of the screen. Cameras pick up the person's movements and choose the correct avatar.

Microsoft offered demos of Kinect to journalists on Sunday night at another media event. A CNN blogger, Scott Steinberg, attended the event and said the system may not be a hit with hard-core or serious gamers.

"None of these applications, from sports-themed mini-games to high-speed arcade outings, seem to promise much more than what you'd find on your Wii console today," he wrote after the event.

Tech pundits expect motion-controlled gaming to be a dominant theme of E3 this year. Also look for news about 3-D gaming, which is taking a cue from the success 3-D has had in movie theaters. Nintendo is expected to release details about its handheld 3DS system, which claims to feature games in three dimensions without the aid of 3-D glasses.

CNN reporters will be on site in Los Angeles for E3. For the latest news, check back at CNN Tech and follow us on Twitter: @cnntech.