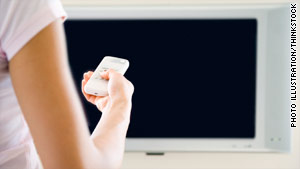 (CNN) -- Saying it will "change the future of television," Google on Thursday rolled out Google TV -- the internet giant's venture into web-TV integration.

The application, run by Google's Android operating system, lets users search for content from their television, DVR and the web.

Even as sites like Google-owned YouTube have emerged as viable entertainment options, the move is a nod to a basic truth of leisure time: The estimated 4 billion television users worldwide is still a much bigger customer base than those using the internet.

"There's still not a better medium to reach a wider and broader audience than television," Chandra said.

The platform will let users search for content, from the name of a TV show to the name of a network, in much the same way a Google search works. They'll get results from TV and the web and be able to watch either on their TV screen.

It also will have voice recognition, letting users speak the name of a show or other content and have it pop up on their screens.

"Videos should be consumed on the biggest, best, brightest screen in your house," Chandra said. "That's your TV."

Devices for Google TV will be sold at Best Buy and on the market this fall, in time for the lucrative holiday shopping season. No prices were announced on Thursday.

The system will allow Android smartphone applications to be displayed on television screens and such integration as being able to watch a show on TV and a Twitter stream of people talking about that show at the same time.

A Google TV home screen will let users organize their content, like shows they've recorded on their DVR, and integration will let users view photos from such sites as Flickr and Picasa on their TV screens.

In addition to Best Buy, other partners include Sony, which will launch a line of TVs that optimize the Google service, Intel, Logitech and DISH Network -- which also will offer features specifically for Google TV.

Developing for the system will be open, a fact that let Google's top brass take several shots at Apple's iPad and iPhone. They pointedly noted that Adobe's Flash media player will be integrated into the system's Web browser.

Adobe and Apple have been feuding publicly, and loudly, over Apple's refusal to run Flash on its products.

"We're thrilled to be part of the Google TV initiative with other industry leaders who share a common vision of enabling access to the best web experiences possible," said Adobe CEO Shantanu Narayen, who attended the event.

Googleisn't the first company to meld web and TV content.

The Boxee Box, a cubelike device that shares internet content with your TV, was awarded the title of "Last Gadget Standing" at January's Consumer Electronics Show in Las Vegas.

And California-based company Roku also offers a digital video player that integrates television, Web content and a video library. It retails for about $100.