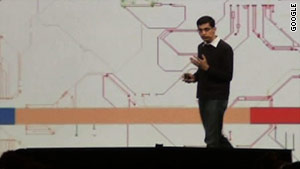 (CNN) -- Google kicked off its annual developers' conference on Wednesday by introducing tools to help people build web-based applications, while making a strong push for HTML5, the next generation of the code on which the web is built.

In a wide-ranging keynote, Google engineers and guest speakers emphasized the potential of the web as an open-source platform for developers to build apps and reduce the dependence on plug-ins -- small external programs, such as the Flash media player, that can make browsers more useful.

"The future of the web is HTML5," Sundar Pichai, a Google vice president of project management, told the audience at the Google I/O conference in San Francisco, California.

In the early 2000s, developers focused almost exclusively on desktop applications, such as Microsoft Office. But in recent years, the priority has shifted toward web-based applications such as Google's Gmail and Twitter.

"From enterprises to consumers, from the smallest form factors to the largest, the web's reach and increasing capability make it the platform for the future."

The company also unveiled the Chrome Web Store, an online marketplace for applications that work with Google's Chrome browser. Developers may submit apps to the store, where users may buy and download them.

Google also introduced an App Engine for Business, which enables companies to build internal applications on the same infrastructure that Google uses.

More than 5,000 developers from 66 countries are expected to attend the Google I/O developer conference, which ends Thursday.