Wanted: Technology to curb mobile phone use in prison 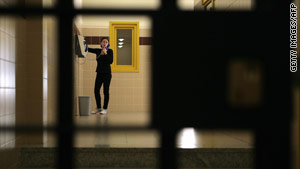 (Ars Technica) -- The campaign to rid our nation's prisons of cell phones went to the next level on Wednesday, with a call from the Department of Commerce for intel on devices that can get the situation under control. The government is "seeking comment on technical approaches" to the problem, Commerce says.

"The illicit use of cell phones by prisoners is a danger to public safety and must be addressed," declared the department's National Telecommunications and Information Administration boss Lawrence Strickling upon release of a Notice of Inquiry. "At the same time, we need to make sure that any technical solutions do not interfere with 911 calls, government or other legitimate cell phone use."

Congress is all over the place on this issue. The Senate has passed the Safe Prisons Communications Act, which would allow prisons to jam cell phones. The Federal Communications Commission forbids this practice at present, and the wireless industry wants to keep it that way.

There's also the Cell Phone Contraband Act, which would make illegal possession of a mobile wireless device by the resident of a Federal prison. The Senate has passed this proposed law, too, but neither bill has made it through the House of Representatives.

What has gotten to home plate is a some language added to the massive 2010 Appropriations bill tasking the NTIA, Federal Communications Commission, Bureau of Prisons, and National Institute of Justice "to develop a plan to investigate and evaluate how wireless jamming, detection, and other technologies might be utilized for law enforcement and corrections applications in Federal and State prison facilities."

That's what the NTIA is following through on now, since it's the agency that will coordinate the final report. The three technological methods that the NOI identifies as possible are jamming, managed access, and detection.

Managed access involves "capturing" then rerouting unauthorized cell phone calls. Its virtue is that it allows some authorized use. But: "It is unclear whether or how well these systems can discriminate among prison authorized cell phone numbers and 'unknown' phones to avoid capturing/canceling calls that do not involve inmates," the NOI notes.

Detection, as the word suggests, involves identifying cell phone calls as they come into the facility, and then, presumably, doing something punitive about them.

We asked CTIA - The Wireless Association, which methods it favors. The trade association will focus on explaining why the government "should support non-interfering technologies such as cell detection and managed access to solve the problem of contraband phones in correctional institutions," CTIA's Steve Largent told us.

On top of this debate, expect a wide variety of gadget and gizmo vendors to chime in on this probe, urging the government to smile on their particular product?in the interest of public safety, of course.