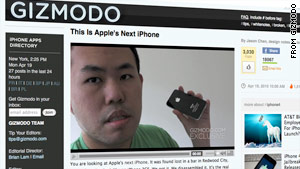 (WIRED) -- The person who found and sold an Apple iPhone prototype says he regrets not doing more to return the device to its owner, according to a statement provided by his attorney Thursday in response to queries from Wired.com.

Brian J. Hogan, a 21-year-old resident of Redwood City, California, says although he was paid by tech site Gizmodo, he believed the payment was for allowing the site exclusive access to review the phone. Gizmodo emphasized to him "that there was nothing wrong in sharing the phone with the tech press," according to his attorney Jeffrey Bornstein.

Wired.com identified Hogan as the finder of the prototype by following clues on social network sites, and then confirmed his identity with a source involved in the iPhone find.

Hogan has been interviewed by law enforcement investigators but has not been charged with a crime. His attorney says he is willing to cooperate with authorities.

It's generally considered theft under California law if one "finds lost property under circumstances that give him knowledge of or means of inquiry as to the true owner" and yet appropriates the property for his own use "without first making reasonable and just efforts to find the owner and to restore the property to him."

The person who found the phone "is very definitely one of the people who is being looked at as a suspect in theft," San Mateo County Chief Deputy District Attorney Stephen Wagstaffe told Wired.com Wednesday. "Assuming there's ultimately a crime here. That's what we're still gauging, is this a crime, is it a theft?"

On April 19, Gizmodo, which is owned by Gawker Media, published a bombshell story about the iPhone prototype, which had apparently been left at the Gourmet Haus Staudt in Redwood City. It was left behind by an Apple engineer named Gray Powell.

"Brian opened the phone onto a Facebook page but then the phone shut down," attorney Bornstein writes. "From that time on, the phone was inoperable the entire time Brian had it."

Hogan didn't know what he had until he removed a fake cover from the device and realized it must be a prototype of Apple's upcoming next-generation iPhone, according to Gizmodo's account of the find.

A friend of Hogan's then offered to call Apple Care on Hogan's behalf, according to Hogan's lawyer. That apparently was the extent of Hogan's efforts to return the phone.

After the friend's purported efforts to return the phone failed, several journalists were offered a look at the device. Wired.com received an e-mail March 28 -- not from Hogan -- offering access to the iPhone, but did not follow up on the exchange after the tipster made a thinly veiled request for money. Gizmodo then paid $5,000 in cash for it.

The owners of the bar told reporters that Hogan didn't notify anyone who worked at the bar about the phone. They also said Powell returned several times after losing the phone to see if anyone had found it and turned it in. Powell and Apple's outside counsel contacted the San Mateo County District Attorney's office last week to report the phone stolen, according to reports.

"He regrets his mistake in not doing more to return the phone," says Bornstein's statement. "Even though he did obtain some compensation from Gizmodo, Brian thought that it was so that they could review the phone."

Shortly after Gizmodo published its story, people identifying themselves as representatives of Apple appeared at Hogan's home seeking permission to search the premises, according to a source involved with the iPhone find. A roommate turned them away.

Records show a Redwood City address for Hogan about a mile from the bar where he found the phone. Nobody was at home when Wired.com knocked on the door earlier this week. Hogan previously lived in Santa Barbara, where he attended Santa Barbara City College as recently as 2008, according to his Facebook profile, which was deleted last week.

His attorney says he recently transferred schools and will resume his college education in the fall. He has been working part time at a church-run community center giving swimming lessons to children and volunteered at a Chinese orphanage last year while he was enrolled in a study-abroad program.

"He also volunteers to assist his aunt and sister with fundraising for their work to provide medical care to orphans in Kenya," his attorney says. "Brian is the kind of young man that any parent would be proud to have as their son."

Gawker Media and others have said the search warrant violated state and federal shield laws protecting journalists from searches and seizures without a subpoena. The San Mateo County district attorney's office said this week that investigators will not examine the seized materials until the legality of the warrant has been resolved.

Hogan's attorney, Jeffrey Bornstein, is a former federal prosecutor, who is now a partner at the San Francisco law firm K & L Gates. As a defense attorney, Bornstein notably represented the captain who steered a container ship into the San Francisco Bay Bridge in 2007.

In an interview at his office Thursday afternoon, the lawyer said Hogan's family has relocated to an undisclosed location in anticipation of a media frenzy. "This thing has gotten completely, completely out of control," said Bornstein, referring to the public interest in the story.

"He made a mistake," Bornstein added. "He should have just immediately turned that phone in."