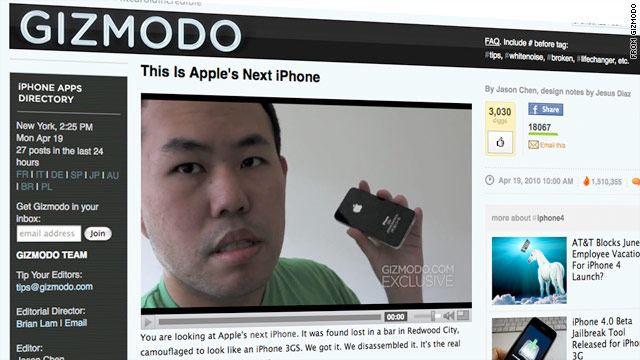 Tech blog Gizmodo posted a video of a phone saying it's the prototype of the latest iPhone.
STORY HIGHLIGHTS

(CNN) -- Apple Inc. hasn't said how much future generations of the iPhone will cost, but an editor of a technology blog said his site shelled out $5,000 to get its hands on a possible prototype.

Gizmodo Senior Editor Jesus Diaz said his blog paid "a source" $5,000 for the phone, which was shown in a video on the blog Monday.

"Paying for an exclusive has always been done in the journalism world. There are people who admit they do it and people who do not. We have done it," Diaz told CNN's Gabriela Frias in an interview on CNN en Español's "En Efectivo."

Diaz said the blog's source obtained the phone after it was left in a bar.

"An engineer was in a bar, celebrating his birthday. He drank two drinks too many and forgot the phone," Diaz said.

He said Gizmodo returned the phone to Apple after receiving a letter asking for it.

Video: Is this the new iPhone?
RELATED TOPICS

"It has come to our attention that Gizmodo is currently in possession of a device that belongs to Apple," says the short letter from Apple's lawyer to the blog. "This letter constitutes a formal request that you return the device to Apple. Please let me know where to pick up the unit."

Gizmodo, which posted the letter on its site, said the letter erases any doubt that the phone is the real deal.

"Just so you know, we didn't know this was stolen when we bought it," wrote Brian Lam, the site's editorial director, in his response. "Now that we definitely know it's not some knockoff and it really is Apple's, I'm happy to see it returned to its rightful owner.

"P.S. I hope you take it easy on the kid who lost it. I don't think he loves anything more than Apple except, well, beer."

Photos of the fourth-generation iPhone prototype first appeared on the tech blog Engadget over the weekend. The site said whoever sent the photos found the phone on the floor of a bar in San Jose, California.

On Monday, Gizmodo said it had obtained the device, but wouldn't say how.

Diaz said the price Gizmodo paid for the phone was worth it, even though editors weren't able to take advantage of all its features.

"It was remotely deactivated by Apple," he said. "But the screen is better, double the resolution of past versions. The quality of the product is much better. ... It is pleasing to touch it."

The find was widely considered the real thing in the tech world.

"At this point we're pretty much certain it is this summer's new model," wrote Wired magazine. "Somebody at Apple is in big trouble."

Daring Fireball blogger John Gruber, who is known to have connections inside Apple's Cupertino, California, headquarters, said on his blog that Apple had reported a prototype stolen.

He also said Apple has a patent out for a phone with a ceramic backing. Some of the images online appeared to show just such a backing.

Gizmodo's photos of the device's internal components show they're labeled as Apple products. The blog also said a computer recognized the device as an iPhone, and the phone apparently runs the yet-to-be-released iPhone OS 4.0.

Apple has not confirmed that a new version of the iPhone exists, though analysts widely expect the fourth generation of the device will be released in the summer. Apple did not return CNN requests for comment.

Even if the new iPhone is real, it's important to keep in mind that the device is just a prototype. It's unclear how many of its features will be available on the new phone.

A quick glance at the photos shows a flatter, less curvy iPhone. The back of the phone is completely flat, unlike the current model, which is tapered to fit the curve of a palm.

The new phone's back is ceramic rather than plastic, and has an aluminum border with two volume buttons instead of just one. Unlike the current model, it has a front-facing camera. It also has a camera on the back, which is larger than the one on the back of the current 3GS model.