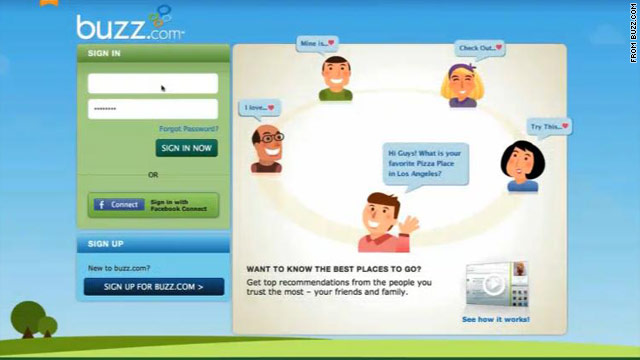 (Mashable) -- AT&T is officially opening up its recommendation service, Buzz.com, to the public.

We wrote about the project when it was still in beta in January. The service is essentiallyYelp meets Yellowpages.com and it shares a lot of similarities with the new Google Places.

The idea behindBuzz.com is to leverage users' existing social graphs alongside traditional, location-based business search. So if I look up "movie theater" in Atlanta, Georgia, I can see not just a listing of places, but also how many people have rated the place as a "favorite" and if any of my friends have rated or favorited it as well.

Right now, Buzz.com integrates with Facebook Connect, so you can ask questions via Buzz.com and on Facebook to receive recommendations and answers to your queries. We assume that Buzz.com will integrate with Twitter in the future as well.

Although open to the public, the product is still very much in beta. While the interface seems easy enough to use, I had lots of duplicate or outdated entries in my search results. This is something that can be cleaned up, but right now it's difficult to rate or favorite a place when it is listed numerous times.

While location-based search paired with reviews from others and from your own social graph is a very cool concept, it's also not very original at this point. AT&T has been developing Buzz.com for more than a year and a half, so this isn't so much a case of being late to the party as it is poor timing -- and poor naming.

One of the biggest questions we have about Buzz.com is, in truth, its name. Yahoo Buzz came to the market first, followed by Google Buzz earlier this year. It's understandable that with a private beta already underway, AT&T wouldn't want to change product names; however, in this case, we think the company should have considered it.

Google Buzz coupled with Google Places is extremely similar to what Buzz.com is all about. The only real difference is that Buzz.com is designed to plug into Facebook Connect, whereas Google is using its own social graph. Facebook integration sounds like a plus, but at this stage, the extent of the integration and how useful it will be largely depends on how many of your friends are going to sign up and use Buzz.com.

Google Buzz isn't the only service that Buzz.com is going against; Yelp, Citysearch and more location-based social networks like Foursquare, Gowalla and Loopt are all in this same territory. What value is Buzz.com going to offer users that these already established services don't?

From what we can see, Buzz.com is really an attempt to modernize the aging YellowPages.com ecosystem. With Google Places, YellowPages.com has increased competition, and we think that Buzz.com will need to get some killer features -- like pulling in recommendations from other location-based sites and promoting special offers or coupons -- and that the YellowPages.com database will need to be seriously culled in order for this idea to take hold.

AT&T says it wants to use its experience in building mobile applications to make Buzz.com a more mobile destination. While a default Buzz.com connect/search bar might have worked in the pre-smartphone era, we live in the world of "there's an app for that." Buzz.com will also need to make its mobile applications and mobile support robust.

In time, the site might develop into something compelling and competitive. However, at this stage, the entire concept strikes us as being too derivative -- in name and in function -- with myriad other services.