South Korea and Japan streets ahead in smart transport 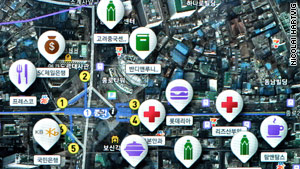 Interactive subway systems help you find your way around stations and their surroundings.

Seoul, South Korea (CNN) -- Juwan Yoo was tired of calling up the old-school telephone hotline to find out when his bus would come -- and excited about the iPhone's arrival in South Korea.

So the 17-year-old developed the "Seoul Bus" application, which crawls public transport Web sites to give real-time updates for all bus stops in the capital and its surrounding provinces. More than 400,000 people have downloaded the free app, Yoo told CNN.

Yoo is now affectionately known as "the high school student" to South Korean traffic researchers and officials after he ventured into intelligent transport systems (ITS).

For more than a decade, South Korea and Japan have been rolling out their world-leading ITS, pouring money and political capital into ideas beyond the carpool lane.

Drivers race through expressway toll gates as their wireless wallet pays the fee, while GPS updates in half of South Korea's 17 million registered cars tell them how many minutes delay they can expect and how to take a faster route. Public buses are fitted with shrieking dashboard road-nannies that help drivers stay on schedule. Millions of passengers seamlessly transfer using the ubiquitous T-Money travel card, finding their next bus or subway train on up-to-the minute electronic schedules.

"Our transportation life in Korea has much improved -- and our quality of life as well," Kee Yeon Hwang, the director of the Korea Transport Institute (KOTI), the South Korean government's official research arm for transportation, told CNN.

By many measures, it has also saved time and money. Average speeds on the roads of Seoul has increased from around 20 to 24 kilometers per hour in the past five years. South Korea estimates the total savings of its ITS systems, including automatic toll collection, fewer accidents and less pollution, to be around $1.5 billion a year.

ITS costs less than one percent of the investment necessary to build a four-lane road.
--Young-jun Moon, green transport researcher
RELATED TOPICS

South Korea's ITS has always been government-led and heavily centralized, quickly pushing the country from research to national implementation. The funding continues unabated, to the tune of $230 million dollars annually until 2020.

"The government knew exactly what it had to do. It invested the money and led this as a government project," Young-jun Moon, a research fellow at KOTI's Department of Green Growth Policy and Implementation, told CNN.

The construction industry helped turn South Korea from a post-civil-war wasteland into a thriving modern economy -- and since the early 1990s, has been in partnership with information technology.

"ITS costs less than one percent of the investment necessary to build a four-lane road," Moon said.

Most roads still get grid-locked and Japan knows the cost of its problem. Drivers there lose 3.5 billion potential working hours to traffic jams, at an equivalent of $109 billion a year, according to the country's Highway Industry Development Organization.

Meanwhile, commuters and transported goods in the U.S. are stuck for 4.2 billion hours a year -- a full work week per person at a total cost of $87.2 billion, according to the Department of Transport's Research and Innovative Technology Administration.

That missed productivity could be particularly costly, as economic rival China ramps up its own investment in ITS, warns a new report from the Information Technology & Innovation Foundation (ITFT), a Washington, D.C.-based think tank.

The U.S. is still stalled in the research phase and the ITIF report calls for a federal approach comparable in scale to the Interstate Highway System launched in the 1950s, with national real-time traffic information in the 100 largest cities by 2014 and a mileage-based user fee system by 2020.

It is ironic, then, that South Korea's traffic setup was adopted from the Intelligent Vehicle Highway System, an ITS forefather pushed by the U.S. Federal Highway Administration in the early 1990s.

A patchwork of state and local responsibility for U.S. roads is a hurdle, something the European Union is also facing as it seeks to introduce ITS standards.

The U.S. is expected to spend more than $500 billion dollars on surface transport infrastructure until 2015, while the Department of Transportation's ITS strategy for 2010-2014 keeps intelligent transport funding at about $100 million per year.

Even in South Korea, some jurisdiction tussles remain. The National Police Agency controls the country's traffic lights and adapts them according to drivers' complaints rather than extensive data offered by traffic planners, Moon explained.

The government is also facing bandwidth gridlock as it attempts to switch wireless traffic communications to the world standard 5.9 GHz. In an odd coincidence, that frequency in South Korea is heavily dominated by broadcasting companies beaming mobile TV to commuters.

"People often violate traffic rules but unless you keep the rules, the system cannot be workable."

South Korean planners are looking to link the upgraded transport to the country's next economic driver, green technology. Still in embryo, the ideas include data systems that allow drivers to map the fastest and most eco-friendly routes.