Family cashing in on 'David After Dentist' 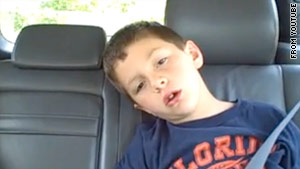 The viral video, "David After Dentist," has been viewed more than 53 million times.
STORY HIGHLIGHTS

Austin, Texas (CNN) -- If you spend any time on the Internet, you've no doubt seen "David After Dentist," the YouTube video of a woozy 7-year-old boy in the back seat of a car, struggling to understand the effects of anesthesia.

The viral clip has been viewed almost 54 million times and gave rise to the catchphrase, "Is this real life?" It was the second most-watched video of 2009, according to YouTube, trailing only Susan Boyle's appearance on "Britain's Got Talent."

It's also been an unexpected bonanza for the boy's Orlando, Florida-area family, who, despite some criticism that they exploited their child by posting his image online, has turned the one-minute, 59-second home video into a lucrative sideline.

"We embraced it," said the boy's father, David DeVore, who shot the famous clip on a Flip camera from the car's front seat. "We said we will make a family adventure out of this and see what happens. Nothing has happened that we felt uncomfortable doing."

He would not say exactly how much the family has earned from the video but said it's in the "low six figures."

DeVore gave a presentation this week at the South by Southwest Interactive festival in Austin, Texas, where he explained what the family's life has been like in the 13 months since the video went viral.

"Well, I'm David DeVore, also known as David's dad, or the idiot that posted a video of his son on YouTube," he told the audience as he began his talk. DeVore then played a video greeting from David, who is now 9 years old and looks noticeably older than he does in the famous video, which was shot in May 2008. David DeVore at the SXSW festival this week.

"I'm sorry I couldn't be there with you in Austin," young David says in the new video. "I have school, you know."

DeVore said he shot the original video for two reasons: His wife couldn't attend the dental surgery, so he wanted to show her that David was OK after having an extra tooth removed. Also, he wanted to show David, who was nervous about the procedure, that the anticipation is often the worst part.

"So much for that idea," DeVore said.

He first posted the video on Facebook, but not all his relatives were members of the social-networking site, so he uploaded it to YouTube during the last weekend in January last year, never thinking anyone beside friends and family would watch it.

By the next Tuesday, it had been viewed 3 million times. The video has since spawned dozens of parodies, including "Chad After Dentist" and "David After The Divorce."

Then the media came calling. David and his father appeared on a bevy of TV and radio shows, including NBC's "Today" and Tyra Banks' show. They also did phone interviews with reporters from as far away as Brazil, Spain, Germany and Australia. David's voice also was featured in a 2010 Super Bowl commercial for a Vizio TV.

But not everyone loved the video. According to DeVore, a Chicago Sun-Times columnist wrote that he should be sent to jail and David placed in child protective services. When DeVore appeared on Bill O'Reilly's Fox News show, O'Reilly told him, "I would never do this to my kids. I think it's a little exploitative."

The surgeon who performed the surgery on David also "wants nothing to do with the video," DeVore said.

DeVore said he got his son's permission before posting the video. He also said the family turned down a lot of money from a TV award show that wanted to use the video because they felt the skit wasn't appropriate

"There's nothing that I wouldn't do to protect David and there's just been nothing to worry about through all this," DeVore said the day after his South by Southwest appearance.

"As much as he can understand, we've included him in the decision process and there's been nothing he didn't want to do that we have been involved in," he added. "This fits David's personality. If David's personality and temperament were different, or if he had not liked that I had recorded [the video], then I wouldn't have posted it."

In the video greeting shown at South by Southwest on Tuesday, little David said he has enjoyed his Internet fame.

"It's helped me to go to a lot of places that I would have never gotten to go to before," said the boy. "When my video first got really popular, everybody [in school] started to know it, but then nobody was talking about it. I got some girls to like me now. I'm just a kid. It's not really often that kids get famous."

The video's popularity may also help pay for David's college tuition. The family earns money from licensing use of the video and gets a cut of revenue from the ads placed around the clip on YouTube. They've also started a Web site where they sell T-shirts and other "David After Dentist" merchandise.

"We have made a significant amount of money," DeVore said at South by Southwest. "At first our goal was, 'Maybe we can pay for a few video games or bikes,' but as it grew, we thought, 'Maybe we could pay for college.' I think that's attainable."

DeVore used to work as a real-estate agent but has quit that for now to focus on the little "David After Dentist" empire and spend more time volunteering at his son's school. It's a family venture: David often helps box up T-shirts to fill orders, and mom Tessie DeVore, a publishing company executive, spends about an hour each night moderating comments about the video on YouTube.

"We've turned our 15 minutes of fame into a family business," DeVore said. The family has also donated about $6,000 to charity, including some dental organizations, he said.

The video continues to get about 100,000 views a day, and DeVore said he still hears from people who are discovering it. He has even heard from medical students who want to use the video in presentations about anesthesiology.

"I understand it [the appeal] to a certain extent because it is my kid, but even I don't look at [the video] every day," DeVore said.