Is Google Wave getting Buzzed? 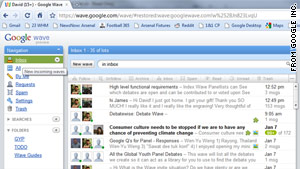 (CNET) -- If Google Wave eventually fails to live up to the promise and hype that accompanied its launch at Google I/O in May 2009, consider its demise an inside job.

Arguably one of Google's biggest announcements of last year, Google Wave appears to be an afterthought among the tech trendsetters after the launch of Google Buzz in early February. Privacy concerns mostly laid to rest, Google Buzz is actually doing much of what Google Wave promised: collaborative discussion, media sharing, and social networking within an e-mail-like framework.

So what are Google customers and users to do with two Web communication platforms? Is Google Buzz simply a stepping stone to Google Wave, as TechCrunch suggested at its launch? Or is it something more, something designed to bypass its more powerful yet complicated corporate sibling?

Don't expect a direct answer from Google. In all fairness, that's because it simply doesn't know: with Wave and Buzz, Google is essentially willing to let the best idea win.

"At the end of the day, we'll find out what users want," said Lars Rasmussen, engineering manager for the Wave project. "If we required every product we launched not to have any overlapping functionality, that would dramatically slow down our innovation."

The Google Wave team has been very quiet amid the Buzz launch over the past several weeks, although it did launch an extensions feature on Friday. Several million people have been invited to try out the service since September, and 1 million are actively using Google Wave, Rasmussen said.

Certainly, Google Wave and Google Buzz have an awful lot in common. Wave was billed as a reinvention of e-mail, a way for individuals and corporate employees to share ideas, media, and conversation in a more intuitive format than e-mail. Buzz was billed as a similar type of social-media tool that allows for the sharing of ideas and discussion among a network.

One way in which they are very different is their introduction to the public. Wave emerged more like a ripple than a tsunami, emerging as an invitation-only service for months before opening up to a wider audience in September.

By contrast, Google Buzz was automatically available to any Gmail user upon its launch in February. For better or worse, the Google Buzz team admitted they took a cue from the anemic debut of Wave, which trend-making social-networking fans like Robert Scoble compared to a boat crashing onto a "beach of overhype."

That reception prompted the Buzz team to adopt the auto-follower strategy that accompanied its launch, giving Buzz users a ready-made social network of their most frequently e-mailed Gmail contacts.

And for its part, the Wave team just rolled out a feature that lets Wave users get an e-mail when their Wave inbox has been updated, implying that while the Mountain View-based Buzz team and Sydney, Australia-based Wave team aren't necessarily in direct competition, they are certainly eyeing each other's work.

Rasmussen confirmed that while the projects are separate, Google employees have been using Buzz internally for months, including his team.

Asked to explain the difference between the two products, he said Wave is designed around making users more productive in their work lives as a collaboration tool, while Buzz is more about "social sharing and passive sharing with people who are interested in what you think."

With Buzz only a month old, and Google Wave not scheduled to open to the general public before the end of June, there's still plenty of time for Google's budding social-networking group to figure out how to build out the projects over the long term and how they should live together.

Rasmussen thinks that a merger might be in the works at some point. "We talk a lot about this: these are two incredibly young technologies that are both getting themselves out there, and the answer to co-exist or merge, that's something we want the world to tell us."

But this is the downside of Google's launch-early-iterate-constantly product-development strategy. To outsiders, the company looks like it's flailing about in search of anything that will stick, and companies and organizations thinking about working with Google can become easily confused as to which project represents the best of the company's thinking.

Insiders see Google's insistence on semi-autonomous teams that are encouraged to follow their muse as the most effective way of generating innovation at such a large company, Rasmussen said. That includes not worrying about how the project at hand will affect other ongoing projects.

Google is "addicted to innovation," Rasmussen said. That means a project like Wave, which the company chose to announce on its biggest stage of the year in 2009, can be eclipsed by a successor in less than a year, and before it has even opened to the general public.

"I wish I could tell you there was a grand master plan," Rasmussen said, "but that's not how it works at Google."