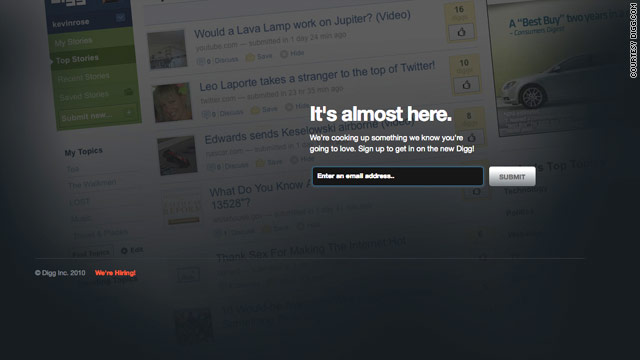 People who sign up to test the new Digg are expected to get invitations in the next few weeks.
STORY HIGHLIGHTS
RELATED TOPICS

Austin, Texas (CNN) -- The popular news-sharing site Digg is getting an overhaul that will personalize results, dramatically expand content and, most importantly, make the site "wicked fast," according to its makers.

Digg CEO Jay Adelson said Sunday that the changes could increase the site's shared content from about 20,000 submissions a day to millions a day.

At the same time, users will get home pages personalized to their interests. Leader boards -- discontinued after complaints from new users and veterans -- will return, with more categories.

"It's going to be a pretty radical set of changes," said Adelson, who first announced the changes at a party hosted by the bookmarking site Saturday night during the South By Southwest Interactive festival in Austin, Texas.

Users interested in testing the new Digg can apply by going to the new site. Adelson said people will start getting invitations in the next few weeks and that the site -- with revisions suggested by alpha-testers -- will open to the public in a few months.

Founded in 2004, Digg allows its devoted set of users to submit a news story or other item that they like. Other users then vote to "digg" or "bury" that item.

The stories that get the most love each day are rewarded with a potential traffic bonanza -- placement on Digg's home page in front of its 40 million or so monthly users.

Like most popular social destinations on the Web, the site has attracted its share of controversy. Some have complained that Digg's user-driven rankings give too much prominence to misleading or sensationalistic articles. The site also was forced to crack down on users who planted phony stories on behalf of marketers.

A key change with the new site will be removing the need to be logged in to Digg to submit an item. Anyone on the Internet now will be able to put a story in front of Digg voters. That's the reason the site expects so many more submissions.

There also will be an unlimited number of topics, helping hobbies, local news and other niche interests that may never make it onto Digg's home page find a place on the site.

"If you think about Digg right now, if you put a Digg button on [a Web page] it's kind of like gambling in that if you hit, you hit big," he said. "But if you don't hit, there's not a lot of value.

"We're trying to address that as a tool and say that ... I should be able to send a predictable amount of traffic to those sort of smaller and medium-tier sites."

The site's speed will be enhanced by an infrastructure overhaul that Adelson said has been five years in the making.

The homepage's leader boards will return in revamped form, this time awarding users who share content in a particular field of interest.

Before, the game aspect of trying to reach the top of a single leader board was unpopular with new users, who felt they could never catch up, and the top users, who reported being offered money by Web sites to put their "Digg" clout behind their sites' posts.