iPhone browsing could be faster with Opera -- if Apple approves 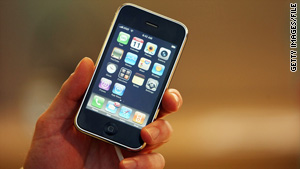 Austin, Texas (CNN) -- The company behind the Web browser Opera is weeks away from submitting it to Apple's iPhone store for approval, a spokesman said Friday.

The result, according to the Norwegian company, would be a browser up to six times faster than the iPhone's default Web tool, Safari.

The question raised by the plans -- and the major publicity push Opera made last month at the Mobile World Conference in Barcelona, Spain -- is whether Apple will approve the application -- in effect creating competition for its own product.

At the South By Southwest Interactive festival in Austin, Opera spokesman Thomas Ford demonstrated for CNN the Opera Mini app being developed for the iPhone.

"I can't positively say the time frame, but I can say it's very soon," Ford said when asked when the app would be officially submitted to Apple. Asked whether it would be weeks or months, he said "weeks."

In the smartphone market, Opera currently is available on BlackBerry, Windows Mobile and Android platforms. Opera Mini is huge on non-smartphone mobile phones, accounting for much of its more than 50 million monthly users worldwide, according to the company.

At the Barcelona conference, the company pushed Opera Mini hard -- an unusual approach for an application that hasn't yet been submitted, much less approved.

But Ford downplayed the notion that the push was meant to put pressure on Apple.

"This is a very, very complete beta," he said. "We were definitely ready to show it to people. We wanted people to see what it would do."

Apple did not respond to an e-mail seeking comment for this report.

While developers have sometimes complained that the Cupertino, California-based computer giant's standards for apps are sometimes hard to understand, Apple has been consistently clear on one point -- apps aren't accepted if they duplicate a function the iPhone already does.

Opera argues that Mini and Safari are different, saying Opera Mini is quicker at downloading regular Internet pages while Safari's design makes it more apt for more data-intensive functions, such as editing a Google document.

Opera's process involves running Web pages through their servers, stripping away all but the most essential data so the pages load quickly.

Whether that's enough of a distinction for Apple to allow another Web browser onto the iPhone remains to be seen.

"I wouldn't say we're trying to back Apple into a corner," Ford said. "We feel that we're very much following their rules."