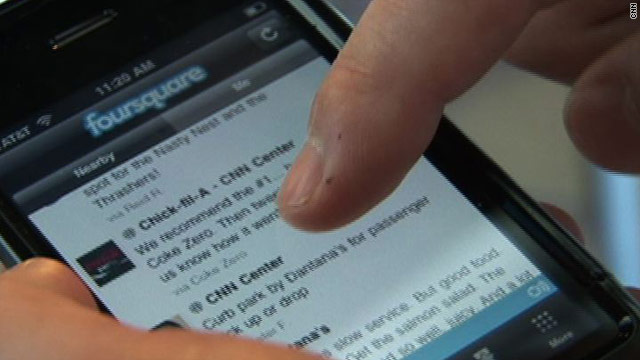 Foursquare and other location-based networking apps let users "check in" at bars, restaurants and other hangouts.
STORY HIGHLIGHTS

(CNN) -- One year ago, the founders of Foursquare stepped onstage before a tech-savvy crowd in Austin, Texas, to announce their concept: a smartphone app that lets you tell friends where you are.

Now, as Foursquare's entrepreneurs head back to the South by Southwest Interactive (SXSWi) festival, they've hit a half-million users of their buzz-creating mashup of social networking and mobile games.

Foursquare has taken the lead in the festival's "location-based wars" as other upstart applications attempt to leverage SXSWi buzz to match the New York-based company's rapid growth and horn in on a burgeoning market.

"We left South by Southwest [in 2009] with 2,500 users and had nothing going on all summer," Foursquare co-founder Dennis Crowley said. "It peaked and then dropped. Then we started getting a little press, and it just took off."

Foursquare uses GPS positioning in its app, available for iPhone, BlackBerry and Android phones, which lets users check in when they visit a bar, restaurant or other location.

The concept is to let users meet up in the real world, share tips on local hangouts or just compete by trying to earn virtual badges for certain activities or become "mayor" of a spot by checking in there more than anyone else.

Despite its relative newness, Foursquare has been creating buzz, inking partnerships with Bravo TV and, according to various media reports, preparing to roll out others with dining guide Zagat, the History Channel, Warner Bros. (CNN's sister company) and HBO.

Foursquare is the second crack at mobile-based networking for Crowley and his partners.

They created Dodgeball -- basically a simpler version of Foursquare -- in 2004. Google purchased that app in 2005 and then discontinued it last year after Crowley and co-founder Alex Rainert resigned from Google in 2007.

"It was like a do-over; we got to start over with the same kind of functionality but do all the stuff we'd wanted to do," Crowley said.

"I'd come from a company that was working on games that overlap with the real world, and we decided to build some gaming elements into it -- game mechanics to encourage people to do things that they wouldn't otherwise."

The New York-based app was previewed around the city before its official coming-out party last year at South by Southwest, where it captured the imagination of techies looking for each other at the festival's panels, presentations and parties.

Today users can "check in" at more than 1.4 million official Foursquare locations, and the service has awarded more than 1 million badges. On March 5 Fourquare had its biggest day ever, with 275,000 checkins, according to a recent post on the site's blog.

But while Foursquare has gained the most traction so far, it's not the only player in the mobile game/networking world.

Austin-based Gowalla also rolled out at last year's SXSWi, although some early glitches meant creators didn't have a product they were completely happy with until fall.

Gowalla, like Foursquare, has spruced up its look and functions and will be vying for the hearts of SXSW-goers this week, with special event-driven offerings.

Others like Yelp, PlacePop and MyTown are also trying to find a place in the emerging field. Even social-networking giant Facebook has announced that it will be adding location-based updates.

But the question remains: How big is the potential for such apps? Although it's growing among the tech crowd, usership is still a far cry from sites like Twitter, with more than 70 million users, or Facebook, which has more than 400 million registered accounts.

"I think it'll be a while before it really reaches a mass audience," said Vadim Lavrusik, a tech journalist, social-media consultant and graduate student at Columbia University.

"For us techies, we sometimes tend to exaggerate how quickly these things are going to grow because everybody in our circles is using it. But that doesn't mean the general public is using it."

Still, he said many of the criticisms he's heard about Foursquare are eerily similar to the ones he heard from people saying Twitter would never take off.

For Foursquare, the growing attention has prompted some backlash.

A Web site called Please Rob Me has exposed what its creators called security concerns when Foursquare users post their mobile location on sites like Twitter, alerting potential burglars that their homes are unoccupied.

Crowley pointed out that users may set their privacy settings so posts go to Twitter or Facebook or both, or only to Foursquare friends whom they have approved.

"People understand these things," he said. "They generally know who they're sharing with."

One thing that won't change with the growing popularity of Foursquare, Crowley sad, is the service's occasionally snarky attitude.

Adopted first by a hip New York crowd, the game's reward badges sometimes have a slangy, pop-culture flavor with titles like "Player Please!" (for male users who check in at locations with several women). There's even one called "Douchebag," reportedly given to people who check in often at places that other users have tagged as less than desirable.

"We don't want to tone it down," said Crowley, who believes that Foursquare may eventually let users choose which of the badges they see. "We're not going to remove the Douchebag badge, but we might hide it ... have a different set of badges for parents, college kids, etc."