The top 10 geek anthems of all time 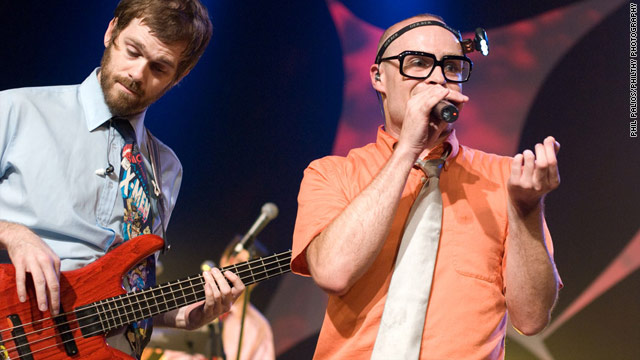 This easily could have been a Top 20. Which ones did we leave out? Click the player on the left to sample the songs on this list, then make your case in the Sound Off section.

When Buddy Holly jerked onstage as a bespectacled counterpoint to the pelvis-swiveling cool of Elvis, it carved out a spot in rock and pop music for the kids more inclined to admire Stephen Hawking than Steven Tyler or Bill Gates than Billy Idol.

The South by Southwest Interactive conference kicks off Friday in Austin, Texas, offering up as pure a convergence of geek and rock sensibilities as you're apt to find.

Now, more than 17,000 people attend those two events, and South by Southwest is becoming as well-known for launching digital game-changers like Twitter as for musical acts like Beck.

All that is as good an excuse as any to round up our list of the top 10 geek anthems of all time.

From love songs about writing HTML code to synth-fueled denunciations of the cool kids, these odes to geekery are as good as it gets.

Which tunes did we leave out? This list could easily have been a Top 20. Click the player on the left to hear samples of our 10 songs, then join the conversation in the Sound Off section and make your case.

1. "She Blinded Me With Science," Thomas Dolby

One of the greatest one-hit wonders in a decade known for them, Dolby [a stage named cribbed from Dolby Laboratories] brought geek to the Top 40 in 1982.

To this day, the chorus' one-word interjection -- "Science!" -- is a universally recognized exclamation whenever geeks gather.

Dolby also walks the walk. He has helped invent the RMF file format, written music for video games and, since 2001, has acted as the musical director for the tech-intensive TED conference.

"White and Nerdy" or "All About the Pentiums" would also have been obvious choices here from an artist with probably as loyal a geek following as anyone.

But "Dare to be Stupid" was a mission statement at a time when Al was still ascending to supernerd status -- spoofing the synth-pop of groups like Devo while goofing on advertising slogans, catch phrases and cliches.

The song would be used in the 1986 "Transformers" animated movie and, years later, be covered by geeky rapper M.C. Chris.

Geek essentials: Daring to be stupid

Every song in Frontalot's catalogue -- sung by the father of nerdcore hip-hop -- would be comfortable on this list.

But this call to arms from his 2005 debut album summarizes the movement -- the "kids with the spectacles" have as much right to bust rhymes as anyone. (Let's be honest: They couldn't do much worse than some previous rap-rock mashups if they tried. Yes, Linkin Park, I'm looking at you).

Frontalot will be playing three Austin shows during South by Southwest, with a new album, "Zero Day," due out in April.

Geek essentials: Wearing glasses, computers (including the Atari 2600), Stephen Hawking, l33t speak, Dr. Who, Dr. Suess, every single other word of the song

"I've got the Dungeon Master's Guide./I've got my 12-sided die./I've got Kitty Pryde and Nightcrawler, too./ Waiting there for me./Yes I do."

Any geek of a certain age instantly knew front man Rivers Cuomo spoke their language after hearing that opening line.

Cuomo, a Harvard graduate who worked the Buddy Holly glasses for much of his career, struggled with the geek-rocker label before finally embracing it, going so far as to confide to Rolling Stone in 2001 that he still played Dungeons & Dragons and leaned toward half-elf fighter-thieves.

"Whip It" may have been their biggest hit.

Coulton embodies the term "famous-on-the-Internet," an artist whose fan base almost exclusively found him online. Bowing to digital-age reality, Coulton lets fans donate money to him via his site because he knows they're all savvy enough to illegally download his music if they want.

As protagonists go, a coder with a caffeine addiction and a crush on the receptionist is right there at the top of the list.

Brainy lyrics and accordions combine to make this one a classic. Appearing on Warner Bros. "Tiny Tunes" didn't hurt either.

The song has cropped up subtly in the fantasy work of novelist Terry Pratchett, in the Marvel Comics "X-Factor" series and as the name of a prototype for the Electronic Arts video game "Spore."

It also might join Weird Al as the nation's leading cause of teen accordion playing.

This has probably the fewest direct references to geek culture of any song on this list, but it was a stark departure from the hair metal and stylized pop of the early '80s.

Spastic, jerky, profane and desperate, "Add It Up" gives voice to every boy at the high-school dance who could never get his back off the wall and ask a girl to dance.

"I was in my bedroom -- that's where I wrote it -- feeling frustrated," Femme Gordon Gano told Rolling Stone in 2005. "I had nowhere to go and nothing to do. It just happened to feel good lyrically ... and it still does."

How this quirky 1998 rap/pop hybrid by a group of Canadians who namedrop Aquaman and Akira Kurosawa became a No. 1 hit is anyone's guess.

But listeners obsessive enough to memorize all the lyrics -- and you definitely had plenty of chances while this song was seemingly being played by every radio station in the world at all times -- found themselves speeding through a virtual geek-culture encyclopedia.

It's every geeky teenage boy's fantasy: using "magic and technology" [in the form of a Memotech MTX512 and its blazing 64k of RAM] to create a beautiful, hard-partying girlfriend who, as an added bonus, can turn your mean older brother into a giant, flatulent frog thing.

Lead singer Danny Elfman would seal the deal in the years to come, lending his soundtrack wizardry to such genre movie classics as "Pee Wee's Big Adventure," "Buffy the Vampire Slayer," "Batman" and "Corpse Bride."