Is Apple launching a patent war? 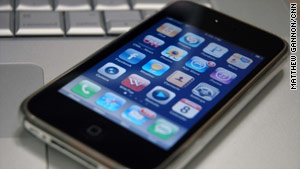 Apple has made it clear that it wants the iPhone to have a unique niche in the market, writer says.
STORY HIGHLIGHTS
RELATED TOPICS

(CNET) -- First, there was the Macintosh. Then it was the iPod, the iPhone, and now the iPad. Next up in Apple's arsenal: The lawyers.

No doubt, when Apple announced Tuesday that it was suing HTC for allegedly infringing on its patents, only one company may have been named, but Jobs & Co. were issuing a legal warning to nearly every company that's released an iPhone-like device.

But how far will this fight go? That's the unanswered question.

The HTC lawsuit could be the first of many as the company stakes its territory in the smartphone market. Larger manufacturers, such as Motorola, Samsung, or Sony Ericsson, may find themselves in the crosshairs later. And even though this particular suit may start with HTC, Apple could end up battling much larger companies Google and Microsoft if it aggressively advances its patent war.

"If Apple just wants to push one competitor out of the way, then it may not implicate Google or Microsoft at all," said Jason Schultz, director of the Samuelson Law, Technology & Public Policy Clinic at the UC Berkeley School of Law. "But if they are staking out their turf and letting everyone know that they own the whole touchscreen smartphone market, then there will be a showdown."

It's still early in the case. Apple has named the patents in question, but it hasn't yet defined how its sees HTC violating these patents. Schultz said when Apple begins filing more detailed arguments it will be much easier to see the company's strategy.

Regardless of how far it goes, Apple's actions are sending a clear signal that the company wants to put the kibosh on iPhone look-alikes. Even as far back as when the iPhone was launched three years ago, it's clear that CEO Steve Jobs wanted to ensure that the iPhone would secure a unique niche in the market.

During that first presentation unveiling the iPhone, he made a point of noting the more than 200 patents that Apple had filed regarding iPhone technology.

Since then, Apple's executives have repeatedly stated they will defend those patents. Last year, when Palm was making a big marketing splash with the Pre, Apple Chief Operations Officer Tim Cook said when asked about competitors that his company would be ready and willing to take on anyone who violated its patents.

"We like competition as long as they don't rip off our IP," he said. "And if they do, we will go after anyone who does."

Many technology companies, such as Nokia, Qualcomm, or Texas Instruments, launch patent fights to extract revenue from companies that will license their technology. In fact, that is why Nokia filed a lawsuit against Apple late last year. Nokia's patents, which it accuses Apple of infringing, largely deal with cellular and Wi-Fi technology. This is technology that Nokia licenses to many other companies, and it generates a nice revenue stream from these patents.

"In many other patent cases, it's about money," Schultz said. "But that's not likely the case with Apple. You generally only get Apple developed technology on Apple products."

Apple certainly doesn't need the money. And it has plenty of cash to pick up the tab for a long legal battle. At the end of December, the company had about $25 billion in cash and short-term investments. When questioned about the company's large war chest, Jobs said during the company's shareholder meeting that Apple is holding onto the money to take "big, bold" risks. Stoking an expensive patent war to maintain the iPhone's unique position in the market, could certainly be considered a "big, bold" risk.

Apple likely chose HTC as its target for several reasons. For one, HTC is a relatively small and young company when compared with some of its handset rivals, which means it has less money for a long legal battle. And it likely has fewer patents that can be used to countersue Apple.

And if Apple is able to strong-arm HTC into changing its designs or even wins the legal war, that will provide leverage that Apple can use against other phone manufacturers, such as Motorola, Samsung, and Sony Ericsson.

These manufacturers may back off on using similar iPhone technology on their own, or Apple could use a victory to bolster its position in future patent fights.

"I would guess Apple wants to take on a fight that they think they can win," Schultz said. "The smart thing to do in these cases is to pick on someone with fewer resources and fewer of its own patents. It makes it much easier to go after subsequent companies with a win under your belt."

Another likely major reason that HTC was picked: it is currently Apple's biggest threat. HTC was the first handset maker to start making Android phones. It sells five today, and it announced two more Android devices at Mobile World Congress last month: the HTC Legend and the HTC Desire.

These phones feature the latest Android software. These latest phones also look more like the iPhone with a curvier, softer, smoother phone design. And functionally, they match and even surpass the iPhone in some ways.

In addition to its growing Android portfolio, HTC also manufactures about 80 percent of the phones that use the Windows Mobile software. And it will likely be the first handset maker to come out with a smartphone using the new Windows Phone 7 operating system, which is specifically designed for touch screen phones could pose a threat to the iPhone.

Today, the Symbian operating system, used mostly on Nokia phones, dominates the smartphone operating system market worldwide. BlackBerry maker Research In Motion holds the No. 2 spot currently, with Apple in the No.3 spot globally. But by 2013, Android is expected knock out RIM as the No. 2 operating system provider globally and bump Apple from its second place position in the U.S.

So why wouldn't Apple simply go after Google if it presents such a large threat? That's a good question. One reason could be because Apple is also a close partner with Google.

Google pays Apple millions of dollars for search requests that come from Safari running both on Apple computers as well as from the iPhone, the iPod Touch, and soon the iPad. Apple is also featuring many Google applications on the iPhone, such as Google Maps and Google Earth.

Fighting an aggressive battle against HTC could still get Apple what it wants without going after Google directly. Other Android phone makers, such as Motorola and Sony Ericsson, may want to avoid getting in Apple's crosshairs. So they may alter their products to ensure their Android and Microsoft 7 Phones don't look or act exactly like an iPhone.

Yet another reason to go after HTC instead of Google or Microsoft may be because it will be easier to get the International Trade Commission, which will likely conclude its case much faster than the federal court in Delaware, to ban the importation of infringing devices into the U.S. Since Apple is not in this for the money, that's likely what Apple wants anyway.

"The patent statute prohibits the importation or selling of a product," said David Levitt, a partner specializing in intellectual property at the law firm of Hinshaw & Culbertson in Chicago. "HTC is the device maker. And the phone is the product sold to the end user, not the Google software."

Still, there is a chance that Google and Microsoft could be dragged into the lawsuit anyway, depending on how aggressively Apple frames its arguments. And given its large wallet, Apple may not care who it takes on.

But in reading the ITC complaint closely, Apple does a curious thing. It names 12 phones that it claims use technology that infringes its patents. Five of those phones -- including the Nexus One, which is sold directly by Google -- use Google's Android operating system. And seven of the phones named in the complaint use Microsoft's Windows Mobile software. While Apple specifically states that five of the phones use Android software, it doesn't explicitly state the other seven use Microsoft's technology. In fact, Microsoft is not mentioned anywhere in the complaint.

It's difficult to say why Apple didn't identify these phones as Windows Mobile devices. It could be because Apple and Microsoft already have a cross-licensing agreement for mobile technology. Microsoft has had an IP licensing program since December 2003, and it mentioned Apple as one of many companies that is participating in this program when it announced a cross-licensing deal with Amazon in February. Microsoft said it has more than 600 licensing agreements with a broad range of companies, including Apple, HP, LG Electronics, Nikon, Novell, and Samsung Electronics, among others.

Neither company has publicly stated what technologies are involved in the deal and which products are involved. But this could explain why Microsoft was not even mentioned in the ITC complaint.

It will likely be months before Apple reveals much of its strategy in the patent fight. But you can bet that other handset makers, as well as Google and Microsoft, will be watching closely.

CNET's Ina Fried and Erica Ogg contributed to this report.