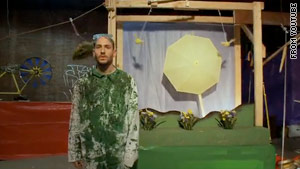 OK Go's "This Too Shall Pass" video took about a month and a half to set up.
STORY HIGHLIGHTS
RELATED TOPICS

(Wired.com) -- In music, timing is everything.

When you're dancing with an enormous machine, it's even more important to get the timing correct, down to the microsecond.

For its latest video, released on YouTube Monday night, pop band OK Go recruited a gang of very talented engineers to build a huge, elaborate Rube Goldberg machine whose action perfectly meshes with the band's song, "This Too Shall Pass," from the band's new album, "Of the Blue Color of the Sky."

For nearly four minutes -- captured in a single, unbroken camera shot -- the machine rolls metal balls down tracks, swings sledgehammers, pours water, unfurls flags and drops a flock of umbrellas from the second story, all perfectly synchronized with the song.

A few gasp-inducing, grin-producing moments, when the machine's action lines up so perfectly, you can only shake your head in admiration at the creativity and precision of the builders.

Those builders were Syyn Labs, a Los Angeles-based arts and technology collective that has a history of doing surprising, entertaining science and tech projects that involve crowds of people, at a monthly gathering called Mindshare LA.

OK Go developed a reputation for making catchy, viral videos four years ago with the homemade video for "Here It Goes Again," which features the band members dancing around on treadmills.

Now, the new video is up -- and it's embeddable, so the band seems to have won this round with its label -- and is already generating buzz on YouTube and on Twitter.

Planning for the video began in November, when Syyn Labs secured a warehouse in the Echo Park area of L.A. But it wasn't until January that work really got going. The video was shot on Feb. 11 and 12.

"A Rube Goldberg machine is in its essence a trial-and-error thing," Adam Sadowsky, the president of Syyn Labs, told Wired.

Sadowsky explained how many tiny details needed to be just right for the machine's timing to work out.

For example, the wooden tracks used to guide metal balls at the beginning of the video had to be cleaned and waxed to keep dust from slowing down the balls and making them stick.

And the angle of that board was set at a precise 3.4 degrees of incline, which was perfect for the timing but sometimes led the balls to jump the track.

Given that each of the machine's dozens of stages need comparably precise adjustments, it all adds up to a lot of labor by a lot of people.

"It took about a month and a half of very intense work, with people on-site all the time," Sadowsky said.

Sadowsky estimates that 55-60 people worked on the project in all. That includes eight "core builders" who did the bulk of the design and building, along with another 12 or so builders who helped part-time. In addition, Syyn Labs recruited 30 or more people to help reset the machine after each run.

Because of the machine's size and complexity, "We needed to bring in every resource we could to help reset," said Sadowsky.

Even with all those people helping, resetting the whole machine took close to an hour.

The video was shot by a single Steadicam, but it took more than 60 takes, over the course of two days, to get it right.

Many of those takes lasted about 30 seconds, Sadowsky said, getting no further than the spot in the video where the car tire rolls down a ramp.

"The most fiddly stuff, you always want to put that at the front, because you don't want to be resetting the whole thing."

OK Go hired Syyn Labs to produce the contraption according to certain specifications. One example: The machine couldn't use any magic.

"That was really important," said Sadowsky, "because we are all engineers, and we love magic. We love computers, and servomotors, and fire, and all of that stuff."

All those "magic" tricks -- basically anything your mom can't understand -- couldn't be in the machine.

The band was also heavily involved in the project for the final two weeks of its construction, and the band members are right inside the machine during the video, of course.

"We wanted to make a video where we have essentially a giant machine that we dance with," said the band's Damian Kulash, Jr., in a short "making-of" video posted on YouTube.

Otherwise, Synn Labs' engineers went to town, dreaming up the most outlandish and elaborate mechanisms they could to "dance" along with the music. The results are impressive.

Oh, and OK Go's treadmill video? It makes a cameo appearance in the machine too.

"It really was a labor of love," said Sadowsky.