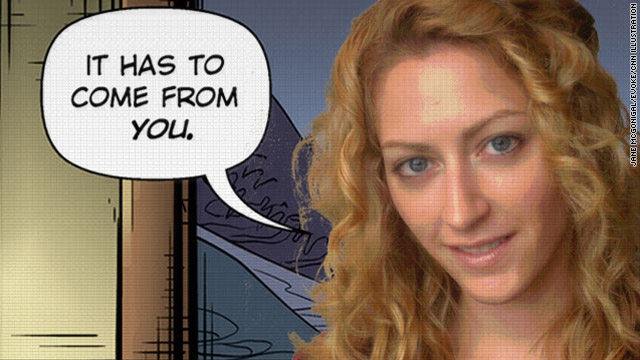 (CNN) -- Some people think of online gamers and see gaunt loners huddled in dark rooms, the sad blue glow of the computer screen on their faces as their lives pass them by.

"Gamers are willing to work hard all the time if they're given the right work," she said. She calls them "super-empowered, hopeful individuals," and includes herself among the bunch.

McGonigal's latest online game, called "Urgent Evoke," launches on Wednesday. With it, she hopes to channel the obsessive focus online games create into something more productive than conquering monsters and earning virtual weapons.

She wants to push people in Africa -- a long-troubled continent where people might feel less empowered than elsewhere -- to solve problems like environmental degradation, lack of food, water scarcity, poverty and violence.

To do this, the Urgent Evoke game -- classified in the emerging "alternate reality" genre -- straddles the online and physical worlds. Players, a few hundred of whom are in Africa, earn points and power-ups by completing real-world tasks like volunteering, making business contacts or researching an issue, then submitting evidence of their work online.

At the end of the game, McGonigal expects some players to have business plans about how they will improve the world.

Play a game, get a job

Depending on how well the game goes, Urgent Evoke could influence the future of alternate reality gaming and spur innovation in Africa.

Bob Hawkins, senior education specialist with the World Bank Institute, said one big reason people in African countries aren't as entrepreneurial and innovative as those in the West is that they don't feel as empowered to create change. That's largely why his international development group is funding McGonigal's project to the tune of $500,000.

"There have been studies, for instance, in South Africa that the public investment in universities isn't producing the types of new ideas and innovation that industry wants," he said. "What happens is that industry is importing ideas from outside the continent and outside of South Africa."

He hopes Urgent Evoke will empower people in Africa to change their own futures. This game will act as a kind of hyper-engaged online social network, he said, setting people in the developing world up with contacts in Europe, the United States and elsewhere who may offer insight or even cash.

An unannounced number of game "winners" will be given mentorships, internships, start-up money and scholarships for playing the game.

Responding to an 'Evoke'

At first, none of that may sound especially game-like.

But McGonigal, the game designer, said the power of Urgent Evoke is that it doesn't feel like work when you're immersed in the story and working with other gamers around the world to chase bite-sized goals.

Urgent Evoke gamers follow a story that's presented each week like a comic book online. The central figure of the Evoke narrative is a mysterious character who spots the world's big problems and sends out "Urgent Evoke" messages to a team of game players on Wednesdays, asking for help.

A new challenge, such as a famine or water shortage, is presented to players at midnight for 10 weeks. Players earn points by accepting the challenges and then responding with evidence that they've used their real-life "superhero" powers to help. A person might, for example, contact a community organization that specializes in environmental issues, or try to provide meals for someone in their neighborhood.

Players catalogue their activities and submit the evidence in the form of a blog post, a video or a photo, which players post on the Urgent Evoke Web site.

Other people in the game network read these posts and, if they feel the player has done a good job, can award them further power-ups in a number of categories like creativity, collaboration, sustainability and courage.

Players with the most points at the end of the game win, but McGonigal and Hawkins said the experience of playing is what's most valuable.

The game will "open their eyes to the range of challenges that they could roll up their sleeves and take on," Hawkins said.

McGonigal makes the controversial argument that if people played more online games like Urgent Evoke or World of Warcraft, our society would be better equipped to battle big problems.

That's because gamers are trained to believe they can win, and because they're matched with tasks that are fit to their skill levels, based on what level they've achieved in the game, she said.

McGonigal wants to see people exhibit the same level of enthusiasm and optimism they display in games in their real lives.

People spend a collective 3 billion hours per week playing online games today, she said. That number must be 21 billion -- seven times the current amount -- for our society to realize its innovative and creative potential, she said.

Not everyone thinks that's a good thing.

Kimberly Young, a PhD psychologist and founder of the Center for Internet Addiction Recovery, argued that online games, educational or not, are an addictive force in our society.

People can learn and develop skills in online worlds, she said, but "they do that to the exclusion of developing those skills in the real world."

Even those who support the Urgent Evoke game admit it faces a number of challenges.

Chief among them is that the online game is designed particularly for people in Africa, a continent where people have less Internet access than anywhere.

About 400 of the 3,500 people who have signed up for the game so far come from Africa, said Hawkins. He said the World Bank is launching an ad campaign in South Africa to encourage people to play.

Many university students have access to computer labs with the Internet, he said, and the game is designed so it can also be played over SMS text messaging or on mobile phones that use the Opera Mini operating system, which is popular on the continent.

"Even if you never get to a computer, you could do everything that you would need to do in the game on your cell phone," McGonigal said. "Pretty much everyone that we would be trying to reach through this game has cell phone access."

People outside Africa are also encouraged to play, and the game has a "mentorship" program so people all over the world can give guidance.

The other nagging question is to what extent the online game actually can inspire lasting change in the real world.

McGonigal's previous work shows some degree of lasting change may be possible.

In 2007, she created an online game called "World Without Oil," which challenged people to re-imagine their lives without their dependence on fossil fuels. McGonigal did not conduct scientific focus groups with the game's 1,700 players, but she said she has gotten feedback from many of the players. They reported their energy consumption habits changed during the game and that they've kept those changes up in the years that have followed, she said.

For Urgent Evoke, McGonigal said she plans to conduct surveys of participants to see if the game actually led to real-world change.

She said she will measure success by how involved people are in the game, whether they stick with the story until the end and if they've joined organizations or taken real steps to create change in their communities.

If all goes well, the World Bank may sponsor an Arabic version of the game next year. There are also tentative plans to hold sequels in Africa.