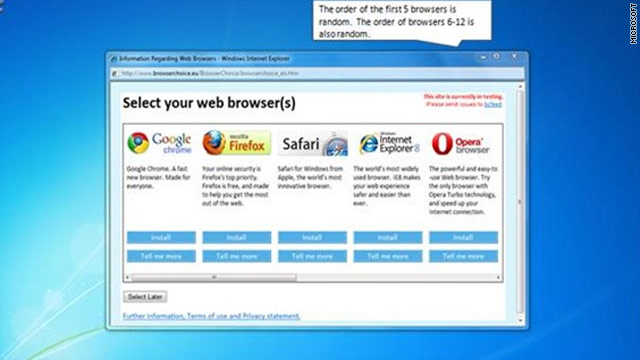 As of Monday Microsoft users will be able to select an alternative browser from a pop-up menu.
STORY HIGHLIGHTS
RELATED TOPICS

London, England (CNN) -- Microsoft is to offer its European users the chance to use a Web browser other than its own.

The agreement with the European Commission ends a long-running dispute over the U.S. software giant's dominant market position.

Earlier this year European regulators said the inclusion of a browser with its Windows operating system was a likely violation of European antitrust law, despite the fact it had done so for over a decade.

Given Microsoft's dominance of the PC operating system market -- with 100 million European users of Windows according to the EU -- the Commission argued on its Web site that bundling the two products together deprives consumers of choice and results in fewer innovative products on the market.

As of Monday users will be able to select an alternative browser from a pop-up menu or opt to stick with Internet Explorer.

According to Microsoft, this "browser choice screen" will present users with a list of leading browsers -- including Mozilla's Firefox, Apple's Safari and Google's Chrome -- presented in random order, in keeping with its agreement with the European Commission.

1. Click on "Install" to install one of the listed browsers.

2. Click on "Tell me more" to get more information about any of the browsers -- these links are provided by each browser provider.

3. Click on "Select Later" to review the choice screen the next time you log onto your computer.

Microsoft says the screen will be offered as an automatic download through Windows Update for Windows XP, Windows Vista and its latest operating system, Windows 7.

The software update will be installed automatically, or will prompt users to download or install it, depending on which operating system is running and the settings for Windows Update.